Steven Gerrard could be ideal successor to Jurgen Klopp 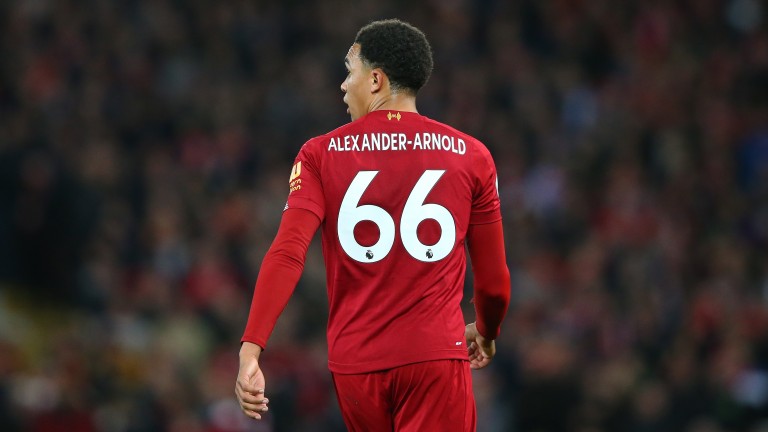 Trent Alexander-Arnold continues to impress at right-back for Liverpool
Alex Livesey
1 of 1
By Jason McAteer UPDATED 9:08AM, NOV 1 2019

There are many commentators and ex-pros who believe Trent Alexander-Arnold has a future in midfield for both Liverpool and England and I don’t doubt that the youngster could star in the Anfield engine room.

Alexander-Arnold is enjoying a stunning start to the season and is rightly earning praise for some sublime performances. Don’t forget he turned 21 only three weeks ago.

But before people try to move him around the pitch too hastily, let’s celebrate what Liverpool and England have got and what they could have. And in my view that, in the next couple of seasons, will be the best full-back in the world.

Yes, Trent could play in midfield – indeed he started off as a central midfielder when he came through the academy. But nowadays he is very much a wing-back and the system Liverpool employ is perfect for him. He’s got quality when he puts balls into the box and he can get back and defend when required to do so.

When you are a midfielder you need awareness both sides, in front and behind. You need a range of different attributes to play in that position and I just think he’s set up to play on the right. There’s a danger you would get less of a player if you played him in midfield.

He’s got tremendous energy and great awareness because he was educated as a midfielder, his delivery is getting better and better, he can shoot and he has worked on his fitness. He’s not the complete full-back – I wouldn’t say he’s the best defender in the world – but his other attributes give you a more rounded player.

He’s in the most perfect role to learn his craft, playing with and against some of the world's finest players in the best competition and in an elite team. If you can’t improve in that setting you never will.

He’s learning from all these experiences. In time he’ll add a bit more versatility – I think he could play on the left, for example, and the manager won’t be frightened of playing him in midfield if he needs to. But I would want to see him mature into the best full-back in the world and that’s surely going to happen.

The role of the holding midfielder has developed in modern times and Liverpool boast one of the best in the business in Fabinho.

He took time to settle at Anfield but was taken out of the team and given time on the training ground and has now slotted back in seamlessly.

He just gets it, gives it and doesn’t do anything flamboyant, though it took him a while to learn the role.

When he first arrived he was probably guilty of trying the odd wonder pass too often. He was trying too hard but Jurgen Klopp is the kind of manager who would have said to him: do this job for me and I’ll pick you every week.

And that’s exactly what he’s doing. His awareness of danger is fantastic. He and N'Golo Kante at Chelsea are the two best players in the Premier League playing that role and he’s definitely one of the final pieces in Jurgen Klopp’s jigsaw.

Steven Gerrard made a clever move going to Rangers to begin his management career – and I wouldn’t be at all surprised if stop two on his journey is Anfield.

I’ve got an inkling that Gerrard will be the next Liverpool manager in 2021.

I’m confident Liverpool will win the Premier League this season under Jurgen Klopp and then he’ll stick around to try to retain the trophy for another season.

And whether he succeeds or fails, my hunch is that he’ll walk away at that point and Stevie will step into his shoes.

I can see the obvious downside with Jurgen being an incredibly tough act to follow.

It’s a bit like when Sir Alex left Manchester United – being his successor was the job you didn’t want, but it was also a job you had to take.

With Stevie, he would be able to walk into a dressing room full of fabulous players and have an outstanding opportunity to continue Jurgen’s work. And of course he would be given a lot of time by fans because of his reputation and his legacy.

He would certainly look at what Frank Lampard has achieved at Chelsea, where he is doing a magnificent job. I’m sure Frank would tell you he hadn’t expected it to go this well but he always had the cushion of knowing he had time in the bank because of his status among the fans at Stamford Bridge.

Football management is all about the timing and Stevie will be aware of that. Look at Manchester United and Mauricio Pochettino. That would have been a marriage made in heaven but he wasn’t ready to go, Daniel Levy wasn’t ready to let him go, and United appointed Ole Gunnar Solskjaer instead.

Brendan Rodgers will be on radars all around Europe

Brendan Rodgers wants to be recognised as a great manager and if, as I think he can, he gets Leicester to break into the top four this season, then he will be.

He comes across very confidently in front of the cameras but I always got the sense he wanted to be mentioned in the same breath as a Jurgen Klopp or a Carlo Ancelotti. He strives to be in that bracket.

Now you can only do that by winning matches, winning trophies and then you can tell everyone where to go and how good you are.

His decision to go to Celtic was smart. He could easily have tried another go in the Premier League – I think Newcastle and Southampton were sniffing around – but he went away, out of the limelight. He knew he was going to win things at Celtic but without that Premier League level of scrutiny.

Then he felt he was ready to come back and in Leicester he has found a club where the board will back him and there is a good playing staff. He needed to get some big characters out of the dressing room because he would then feel he was in charge. The personalities were too strong for someone like Claude Puel but Brendan has gone about his business brilliantly.

He’s doing a magnificent job and if he carries on doing what he’s doing he’ll break into the top four this season and then he will get that really big job that he’s desired like Arsenal or a top club in Spain because he will be on radars all around Europe.