Jason McAteer: Everton should rush in for Rafa Benitez

Expect Pep Guardiola to concentrate on cups from now on 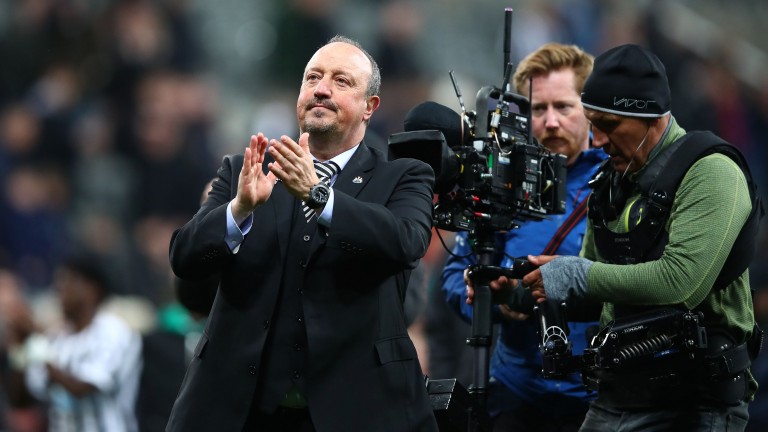 Rafael Benitez has been conspicuous in the media recently
Clive Brunskill
1 of 1
6:01PM, DEC 12 2019

Rafa Benitez coming back to England to manage Everton might take some digesting at Liverpool but I think it’s a perfect match.

He still lives in the area – he’s got a house on The Wirral – and let’s face it, it’s surely not a coincidence that he’s back in England, all over Sky Sports, just as a couple of Premier League managers are losing their jobs.

Tactically you could argue there’s no one better than Rafa for a club like Everton right now.

He’d get those players playing well again, get them organised and get them moving up the table, away from relegation. He’d do well this season I’m sure and then next season you’d see them challenging for Europe.

Rafa has always held a candle for Liverpool and I think would have loved one day to go back to Anfield but maybe he’s now resigned to the fact that’s probably not going to happen.

And there’s enough water under the bridge and time elapsed since Rafa left Liverpool for him to go to Goodison.

And anyway, let’s be honest, Liverpool are so far ahead of Everton that they simply don’t represent a threat beyond the obvious derby rivalry. They aren’t going to challenge for the Premier League or the Champions League.

Watch more of the superb conversation between him and @carra23 on Monday Night Football live on Sky Sports Premier League.

As for Carlo Ancelotti I’m not so sure that it’s the right move for Everton. I’m convinced he’d be more suited to a club like Arsenal.

Of course Duncan Ferguson’s the man in the dugout at the moment and you can’t argue with the tune he got out of the team against Chelsea.

It’s interesting that he gave the impression after that match that he really didn’t want to be considered for the full-time role and I’m not so sure that’s actually what he’s thinking. I reckon he’d bite their hands off if they offered him the job.

Against him is that he’s relatively inexperienced and you can only go so far with passion and desire. I’m not saying Big Dunc hasn’t got it but I’m not sure he’s got it quite yet.

Benitez would be a far better solution to the current sticky situation the Toffees find themselves in.

Expect Guardiola to concentrate on cups

I don’t think he’ll ever really come out and admit it but I think Pep Guardiola has resigned himself to not winning the Premier League.

That may sound daft given that it’s not even Christmas but he’s not a fool and is acutely aware that a 14-point gap is far too much to close.

He’ll want to narrow the gap – pride will ensure that. The last thing he needs is for Liverpool to win the league by 15 or 18 points.

But my sense now is that Pep is going to focus fully on the Champions League, a competition he hasn’t won since he left Barcelona and that pains him.

I also think they’ll win the League Cup. It’s not a trophy he would have had any great interest in at the start of the season but he won’t want to go a season without a domestic trophy and suddenly it takes on added importance.

Liverpool making the most of fortunate timing

Form is what wins you trophies but timing helps and Liverpool have had their fair share of that this season.

Last week was a case in point. If you were going to play Everton and Bournemouth, last week was when you would have wanted to and Jurgen Klopp took full advantage.

I thought it was a massive gamble leaving out Mohamed Salah and Roberto Firmino against Everton and I also think it was a risk making five changes at Bournemouth.

What happens? They win 5-2 and 3-0 and move six points nearer the Premier League title.

They played Everton at the perfect time. It was the worst performance in terms of character, passion and desire from an Everton team that I have ever seen. There was nothing there. They were so poor. It summed up where the club was.

And then Bournemouth went into the game having won just one of their previous nine, were ravaged by injuries and then lost another big player, Nathan Ake, in the first half.

If Liverpool are planning to make a move for Salzburg’s Takima Minamino then I think it’s a perfect fit.

They’ve seen the Japanese star up close and personal in the Champions League and, like me, they’d have been impressed.

In the first game between the sides, the 4-3 win, Minamino was absolutely integral in Salzburg’s second-half improvement. He played in little holes, was quite clever and was a bundle of energy. He scored, taking his chance really well.

He was probably their most impressive player on the pitch that night and in the return he was a constant thorn in Liverpool’s side.

Klopp is not one of those managers who wants to go and spend 70, 80, 90 million pounds on superstars – he likes players he can work with and make better and I think it would be a really good signing at the price. I think they are talking £20-odd million.

He would certainly strengthen the squad. I wouldn’t say he’s going to displace any of the front three but if I was looking to throw someone on for half an hour with the energy and the brain he’s got, he’d be perfect.