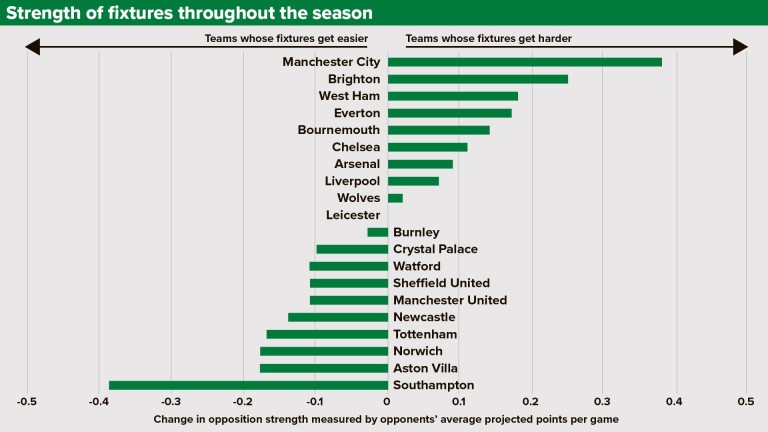 The old cliche that the league table doesn’t lie has come under increasing scrutiny in recent seasons with the rise in metrics such as expected goals displaying how some teams’ underlying levels of performance may be distorted by luck.

With a little over a quarter of the Premier League season in the book, another factor muddying the water is the potential for a skew in difficulty in teams’ fixtures.

The graph above uses Sporting Index’s season points totals to compare the change in opponents' average projected points per game for the games each team has played so far compared to those they will meet in the second quarter of the season.

Sides on the right of the graph are due to tackle a tougher set of matches than they have so far as the fixture list starts to balance out until the round of games just before the new year which signals the point at which each club is scheduled to have played everyone else.

With Leicester odds-on for a top-four finish we will refer to a big seven when analysing the reasons for some teams’ lop-sided fixtures.

They head into their crunch showdown with Liverpool top of the expected goals league table, but it’s worth noting they have played eight of their 11 games against sides who are currently in the bottom half and have played only one of the big seven.

That corrects itself over the next couple of months with five big-seven clashes in their next nine games. While their quality means they will be favourites for all of those matches there is still a greater potential for dropped points in the fixtures they have coming up than in the ones they have already played.

Another interesting match this weekend is at St Mary’s where the sides whose managers are the top two in the sack-race betting meet.

Ralph Hasenhuttl has the best case for hoping he gets more time - so far the Saints’ average opponents have been projected to get 60.4 points over the course of the season, while their next nine games are against teams who are projected to get an average of just 46.

Essentially their average opponents so far has been the equivalent of playing Tottenham every week while in the next portion of the season it will be more like taking on Crystal Palace.

That’s explained by the fact that they have played six of the big seven already and are one of only four teams to have ticked off games against both Liverpool and Manchester City - Tottenham, Aston Villa and Norwich are the others.

If Hassenhuttl can avoid the axe in the next couple of weeks then Southampton face a run of games where they play five teams who are forecast to be in the bottom seven at the end of the season.

If he does get the chop before then, expect the narrative to be about how the Saints are experiencing a new-manager bounce if they start picking up points, when the reality will be at least partly explained by the fixtures evening out.

Marco Silva is in the opposite situation. He could do with his underachieving side getting some points in the bag sharpish as they face a brutal five-game run of Leicester, Liverpool, Chelsea, Manchester United and Arsenal in December.

The mid-table region is congested but two sides who could be looking over their shoulders are West Ham and Brighton.

The Hammers have only played two of the big seven and will have to live up to their reputation of raising their game against the top sides having dropped points in winnable games recently.

The Seagulls are about to start a four-game run against big-seven sides, and with Norwich, Watford, Newcastle and Aston Villa all about to see a slightly easier shift in their fixtures, things could be about to get tighter at the bottom.