Almiron and Saint-Maximin could put Newcastle into FA Cup contention 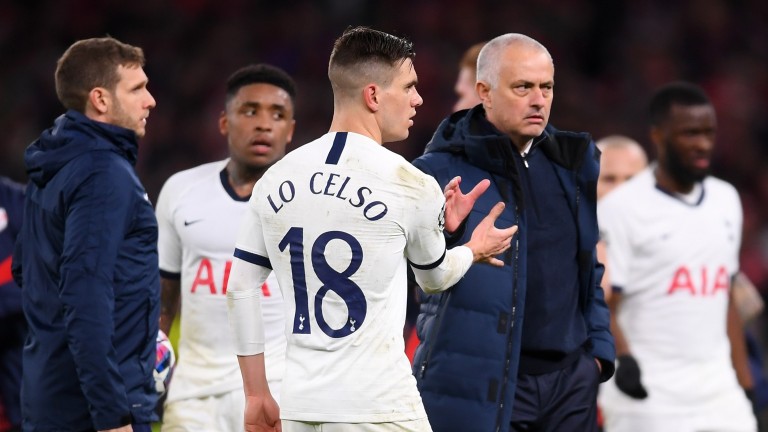 Jose Mourinho has his hands full as manager of Tottenham Hotspur
Laurence Griffiths
1 of 1
11:20AM, MAR 6 2020

Managing Tottenham is the biggest challenge Jose Mourinho has ever faced – but I still think it’s too early to judge him.

He inherited from Mauricio Pochettino a squad who were struggling in the Premier League and clearly in need of a revamp.

His first job was to instil some belief and get them climbing the table again and he’s done that to the point that they are right in the hunt for a Champions League spot.

Suddenly they have lost two goalscorers and results have started to go against them, they are out of the FA Cup and probably heading out of Europe, and people are questioning Mourinho. But I don’t think this is his side yet and you can tell that by the number of goals they are scoring and conceding.

Everybody thought life would be boring under Mourinho with a lot of 1-0 wins and the bus being parked, yet we’ve hardly seen that. Goals have been flying in at both ends of the pitch which isn't what we associate with a Mourinho team.

It’s quite possible he has just looked at the squad and thought I haven’t got what I need to play the way I would like so I’m going to have to go a different way – almost the old Tottenham way – and now let’s just see if we can score more than the opposition.

He has to get through this season and rebuild in the summer, and I reckon you’ll see a proper Mourinho side turning out in August.

Mourinho hasn’t won two Champions Leagues and countless trophies throughout Europe’s big leagues without knowing what makes a good team and he will know exactly what is required to transform Tottenham.

He has already made changes, getting rid of Christian Eriksen and Danny Rose, and we know a few others such as Jan Vertonghen are probably going to be on their way. He needs reinforcements at the back and quality ones at that.

He says he’s not looking to change too much, which is out of character for him, and I’m not sure I believe in him.

He needs a right-back, he needs a centre-back and he needs at least one holding midfielder to add some protection. He also needs another central striker to back up Harry Kane – although if you believe what you read Kane might not be at the club next season.

I don’t know whether that is true or not but it’s another potential headache for Mourinho to have to deal with.

The problem he has is that many of the players who are on the market will also be on Chelsea, Manchester United and City's radar and they can pay over the top for their services, but that’s not Tottenham’s style.

I expect Mourinho’s scouts in Spain, Portugal and everywhere else to be busy finding the talent who he can mould into his team.

Should Eric Dier receive a lengthy ban for jumping into the stands after the Norwich game?

I don’t think the FA will feel they have any choice other than to give Eric Dier a ban and a hefty fine for entering the crowd and taking on a fan.

It was a heat-of-the-moment incident and Dier will have woken up in the morning and realised what he did was wrong.

Emotions run high at football matches and players put up with all manner of abuse. This would have agitated him even more because it was his brother up there and clearly you want to do right by your family. But when you cross the advertising boards as a professional footballer, you’ve crossed another line too. And he know he’s in trouble.

Those comparing it to Eric Cantona’s kung-fu kick are miles off the mark, however. Cantona got an eight-month ban and there’s no way Dier should be hit with a suspension of that magnitude.

If it was me, common sense would say have a strong word with him, fine him a couple of weeks’ wages and warn him about his future conduct. It isn’t as if he’s a serial offender.

My hunch, however, is that the FA will want to make an example of Dier and I expect him to get hit hard in the pocket and quite a lengthy ban.

Will Jose Mourinho risk losing the fans' goodwill if he doesn't give Troy Parrott a chance soon?

The clamour for Troy Parrott to play is getting louder and louder and Jose Mourinho would be mad to ignore it in my view.

For me it’s a no-brainer because he can’t do any worse. Without Harry Kane and Heung-Min Son Spurs aren’t scoring goals and false number nines aren’t the way to go.

They have a ready-made central striker waiting in the wings and the fans know that. They want him to be given a chance.

I think Jose’s being a bit stubborn, but I also think he’s probably looked at Parrott and decided he's not ready just yet.

But when you’ve got a number nine who can score goals at age-group levels then it's worth giving him a shot.

Fans want to see him because they know he is eager and because of the way results have been going and I don’t see what there is to lose.

Newcastle have made an FA Cup quarter-final for the first time in 14 years, what will this mean on Tyneside?

Everybody would love to see Newcastle win a trophy - 1969 was a long time ago.

They have drawn holders Manchester City and they are capable of beating them. Newcastle struggle to score goals but Steve Bruce has a team who work hard and will set out their stall to stifle City, as Sheffield Wednesday did.

They will need to ride their luck but they have pace on the break with Allan Saint-Maximin and Miguel Almiron.

They would like to go into that game with a couple of league wins under their belt because then they can relax.

Teams down the bottom are putting some good results together and reeling in those in mid-table such as Newcastle, who are getting dragged back into it and are looking over their shoulder.

Miguel Almiron has finally hit form, how do you rate his progress?

I was pleased to see Almiron score twice in the 3-2 win at West Brom in the FA Cup, but he needs to be doing it more often.

He has started 32 games for Newcastle this season and scored only six times. Saint-Maximin and Joelinton are also struggling for goals so Almiron needs to chip in.

He has definitely grown into the season after a poor start and Saint-Maximin also looks the part. Fans love the pair of them.

Now they need consistency and goals and Steve Bruce would have a pair of world-beaters on his hands.

Where does Phil Foden fit into the mix for a Euro 2020 call-up?

I also don’t understand why he didn’t play at Sheffield Wednesday in the FA Cup just a few days after his man-of-the-match display against Aston Villa at Wembley.

I’d like to think that perhaps Pep Guardiola is actually paying him a compliment by keeping him back for the Manchester derby because Kevin De Bruyne is injured.

But I’d be playing him all the time because he’s full of energy, young, confident and it isn’t as though he needs a rest.

There’s a lot of talk of Jack Grealish and James Maddison – but this kid’s as good as them if not better.

If he was playing week in, week out, he’d be in the England team, never mind the squad.

But it’s easy for Gareth Southgate not to pick him because he could argue that he’s not playing enough first-team football.

There is no doubt that if he was playing more at City he’d be ahead of Grealish and Maddison but he’s suffering by being at a club full of superstars.

He must have the patience of a saint. If I was him I’d be knocking Guardiola’s door off its hinges demanding to play because it’s quite possible that this lack of playing time will cost him a place at Euro 2020 and that would be a real shame.