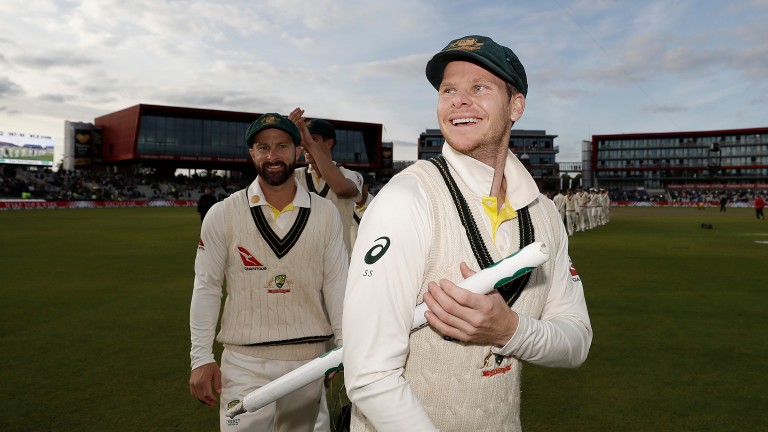 Steve Smith has been superb this Ashes series for Australia
Ryan Pierse
1 of 1
By Matthew Ireland UPDATED 5:23PM, SEP 11 2019

The urn is heading back to Australia no matter what happens in the fifth and final Ashes Test at the Oval this week and it’s difficult to argue that the Baggy Greens have not deserved to retain the most famous prize in cricket.

Were it not for Ben Stokes’ Headingley heroics then the Aussies would, and probably should, be 3-0 up in the series. But with the famous trophy safely retained, the tourists' focus switches to completing a first series victory on English shores since 2001.

The bonkers genius of Steve Smith aside, runs have been hard to come by for the rest of the batting line-ups all summer as the bowlers have asked all the questions and the batsmen have failed to come up with answers.

To illustrate the heights Smith has reached during the series he has scored a staggering 671 runs, nearly double the second-highest total of Stokes, yet has batted three times fewer than nearly all the other batsman.

And it doesn't get any easier for England's bowlers in their quest to somehow shackle the world's number one batsman. In three innings at the Oval, Smith has plundered 288 runs, comprising two centuries, with a best of 143.

It is no surprise to see him chalked up as a short-priced favourite to top the tourists' first-innings scoring again in London and while that looks a touch short, backing him in the man-of-the-match could be the way to support another Smith masterclass.

For England, the series has provided a wake-up call after the euphoria of winning the World Cup in July. Too many of their batsmen have failed to transfer their form from ODIs and their futures in the Test side will be called into question if they fail again, albeit against an exceptional Australian attack.

Jos Buttler, Jonny Bairstow and the dropped Jason Roy had tremendous World Cups but have mustered just a single half-century between them (Bairstow at Lord's) and as a trio they average just 18.5.

England's bowlers have provided home skipper Joe Root with a glimmer of hope, however.

While the attack was significantly weakened by James Anderson's calf injury, Stuart Broad and Jofra Archer have bowled with pace and accuracy with the new ball and made inroads into Australia's batting until Smith's powers of defiance have taken over.

Broad has an edge over David Warner, who he has dismissed six times, and is enjoying the second-best year in his Test career. Archer made a stunning start at Lord's and Headingley before a tired performance at Old Trafford. Root will need both to be at their best this week as Stokes is unable to bowl due to a shoulder injury.

But when those two are out of the attack, and with no Anderson to turn to, England have not looked nearly as threatening and the decision to swap Chris Woakes with Craig Overton in Manchester yielded two wickets at 53.5 runs apiece and the hosts have turned back to the Warwickshire all-rounder after just one Test.

The same cannot be said of the Aussies' bowling battalion. Even when exemplary new-ball partnership Josh Hazlewood and Pat Cummins have ended their spells, they have one of James Pattinson, Peter Siddle or Mitchell Starc to keep the pressure on England's frail batting unit.

Hazlewood's unrelenting line and length has been a constant challenge for the hosts since he came into the side at Lord's and he has picked up 12 of his 16 wickets in England's first innings. Back him to lead the way again with the ball for the tourists.

That intensity with the ball and Smith's brilliance with the bat has been the difference in the series and their superiority could shine through again.

England
Ben Stokes will play as a specialist batsman due to a shoulder injury, with Chris Woakes or Sam Curran coming into the side in place of Jason Roy and Craig Overton.

Australia
The Aussies may opt to continue their policy of rotating their seam attack with James Pattinson the front runner to come back in. All-rounder Mitchell Marsh replaces Travis Head.

Traditionally the final port of call of a Test summer, the Oval is often regarded as a batsmen's paradise with a large square, quick outfield and little in the way of lateral movement for the seamers.

However, that hasn't translated into draws with just five stalemates in 28 Tests since 1990.

England have a strong recent record at the venue but have won only one of the last five Ashes contests to be held there. Australia have twice won by an innings in that time, including four years ago when Steve Smith hit a masterful 143.

The five days look set fair with little chance of rain and temperatures reaching 24C on Thursday and Sunday.