Jim Furyk can get the better of Korean starlet Sungjae Im 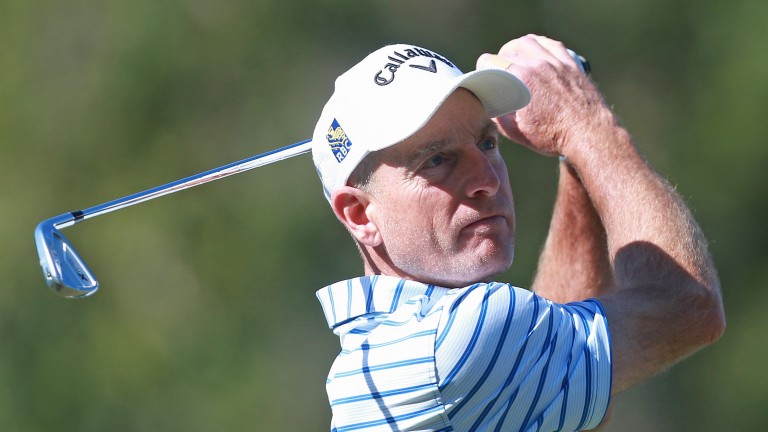 Jim Furyk and Sungjae Im will consider themselves unlucky to have just missed out on a place at next week's Masters, but it could be the former US Ryder Cup captain who makes the better stab at grabbing the final Augusta qualification spot.

Both players were just outside the world's top 50 and, while Im's rise has been impressive in his first season on the tour, he may well run out of steam in San Antonio this week.

While the game's leading lights were battling at the WGC Match Play, the promising South Korean claimed his third top-ten finish in four starts at the Corales Puntacana Championship in the Dominican Republic.

However, he failed to maintain his early-tournament form and closed with a disappointing 71 to finish four shots behind winner Graeme McDowell in a tie for seventh, so a sixth consecutive week of action is likely to prove too much.

Furyk ended 2018 ranked 223rd in the world but is now 52nd, having finished second at the Players Championship a fortnight ago and ninth at the Honda Classic.

He has made the cut on all four occasions he has played at this course and two top-ten finishes suggest it could still be to his liking.

Matt Kuchar played six rounds to reach the Match Play final and it would be no surprise if the demands of that tournament took their toll this week.

Kuchar finished fourth in this tournament in 2014 but his final three course finishes of 42-40-51 do little to inspire.

Billy Horschel should be able to eclipse Kuchar's efforts as he has finished in the top four three times at the venue and was 11th last year. The man from Florida tends to thrive on just this sort of tee-to-green examination.

Jordan Spieth makes his first visit since he finished second behind Jimmy Walker in 2015, but the three-time Major champion continues to struggle.

He will be desperate to get his game in order before he drives down Magnolia Lane next week, but he has not claimed a top-ten finish since The Open in July and hasn't won a tournament since he claimed the Claret Jug at Carnoustie the year before.

Spieth has not finished in the top 30 in his last nine regulation events and if his travails continue in his home state, it may not take much for him to turn his attention to next week, so the 9-4 about him missing the cut could prove a big price.