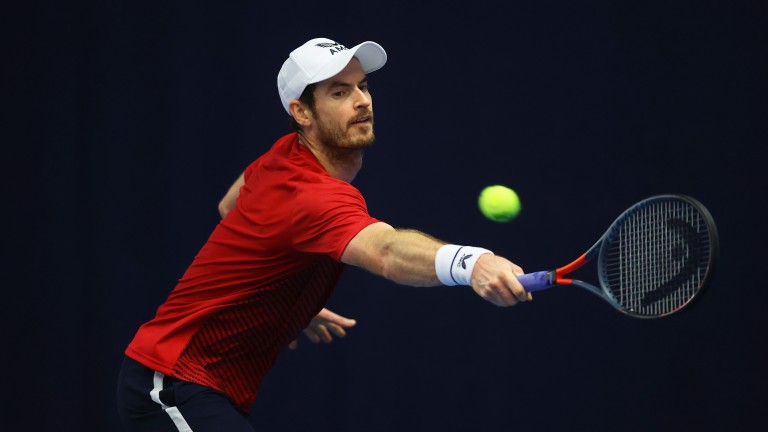 Andy Murray's game looked as good as it has been for years in a Biella Challenger Tour event recently
Julian Finney
1 of 1
By Adrian Humphries UPDATED 3:40PM, FEB 21 2021

After the fun and games of the Australian Open - and how well did Tennis Australia do in successfully staging the first major of the year - it's back indoors for the European season in the coming weeks and Roberto Bautista Agut is the top seed for the ATP Open Sud de France in Montpellier this week.

Along with the Spaniard, David Goffin, Dusan Lajovic and Hubert Hurkacz also receive first-round byes on the Greenset hard courts, but the tournament looks an open one.

Jannik Sinner, Ugo Humbert, Lorenzo Sonego and Jan-Lennard Struff all look worthy lower-ranked seeds. But while Italian Sinner looks sure to go on to big things this season - he has already won one of the many Melbourne Park prep events - his proximity in the draw to wild-card entry Andy Murray is a concern.

On his return from Covid-19 in December, Murray's game looked in good order on his 2021 bow in Italy recently and the Scottish legend made the final, only to be soundly beaten by in-form Illya Marchenko.

However, there was a lot to like about the way the three-time Grand Slam champion went about his business in that Challenger Tour bash. After his fitness struggles in 2020 following his comeback from a major hip operation, Murray actually looks to be competing a lot better now than was the case last season.

The exciting Sebastian Korda also contests the bottom half of the draw, while former top-ten performer Lucas Pouille returns after taking some time out from tennis, but in such an open draw Murray may be worth chancing to step up a notch on his Biella effort.

Experience tends to count indoors and if Murray, whose chance is well respected by the oddsmakers, is feeling good about himself, his game and his chances in Montpellier, he may have enough to tame Sinner and Korda.

Diego Schwartzman, Benoit Paire, Miomir Kecmanovic and Guido Pella are the top seeds in action on the main tour clay-court bow in the Cordoba Open in Argentina.

The legendary David Nalbandian is doing a spot of coaching with Kecmanovic. That won't hurt the Serb's game at all, but he may not be sharp enough to click at the first time of asking.

Even though Schwartzman tops the bill, the bottom half of the draw could take more winning with Thiago Monteiro, Federico Coria, Francisco Cerundolo and Nicolas Jarry four players punters might do well to keep on their side. Nicolas Kicker also returns to the tour in the top half.

Cerundolo could be the one to back. The Argentinian, 22, is a highly regarded performer who looks sure to climb a lot higher in the rankings than his current chart position of 146th. He won clay-court Challenger Tour titles in Split, Guayaquil and Campinas, Brazil, in the last few months of 2020 and could be decent value on his return to the red courts this week.

In the WTA Adelaide International, the first round of which starts at midnight on Sunday, top seed Ashleigh Barty looks the right favourite.

The Queenslander, victorious in her Australian Open prep tournament in the week before the Grand Slam started, has a point to prove, having again failed to prioritise majors over regular WTA fare.

But with Melbourne Park done and dusted and a quieter phase coming up, there's no reason why Barty cannot now add another title to her collection.

Fellow top seeds Belinda Bencic, Johanna Konta and Elise Mertens also receive first-round byes this week and, of that trio, only Mertens has looked to be performing at her peak down under.

Cori Gauff is the top seed in qualifying and, after sweeping aside Briton Fran Jones 6-1 6-4 in round one, the American is due to meet Kaja Juvan early on Monday morning.