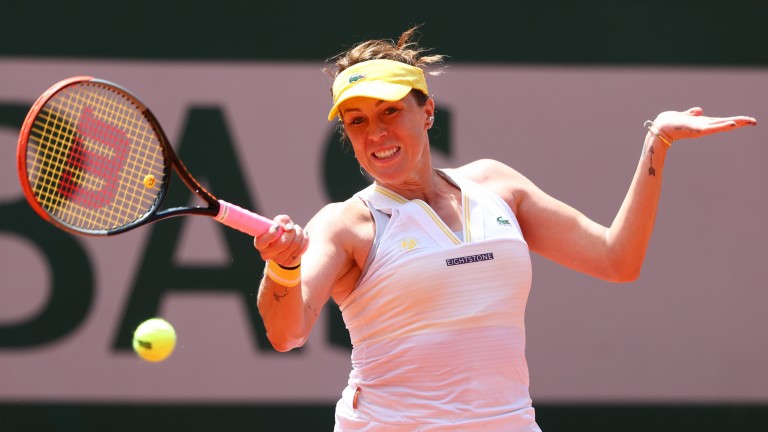 Anastasia Pavlyuchenkova is eyeing a spot in her first Grand Slam final
Julian Finney
1 of 1
By Aaron Ashley 4:57PM, JUN 9 2021

ITV4 & Eurosport, from 11am Thursday

It hasn’t been easy finding the final four women at this year’s French Open and punters should expect the thrills and spills to continue on semi-final day at Roland Garros.

Seventeenth seed Maria Sakkari is the highest-ranked of the quartet left standing and she is favourite to clinch her first Grand Slam crown after stunning reigning champion Iga Swiatek in the quarter-finals.

But there are strong reasons to believe Barbora Krejcikova has achieved just as much as Sakkari on her run to the semis.

The Czech star arrived in Paris on the back of a title triumph in Strasbourg and it was therefore perhaps understandable that she needed three sets to see off compatriot Kristyna Pliskova in her opener after just a three-day turnaround.

Since then, Krejcikova has recorded four straight-sets victories, getting the better of Ekaterina Alexandrova, fifth seed Elina Svitolina, 2018 runner-up Sloane Stephens and one of the most exciting prospects ever to grace the women’s game, 17-year-old Cori Gauff.

Sakkari is not dismissed lightly but Swiatek was evidently nursing a knock in their last-eight clash and the odds appear to underestimate the chances of Krejcikova, who is going from strength to strength and won the pair's sole previous meeting 6-2 7-6 in Dubai in March.

A Grand Slam semi-final is new territory for both Anastasia Pavlyuchenkova and Tamara Zidansek and it isn't easy to know who will cope with the pressures associated with such a big match.

However, 28-year-old Russian Pavlyuchenkova is a 12-time winner on the WTA Tour and has competed in the quarter-final of a Grand Slam on seven previous occasions so should be able to manage any nerves.

For Slovenian world number 85 Zidansek though, Thursday's contest will be like nothing she has ever experienced before.

The 23-year-old had never gone beyond the second round of a Major in eight previous attempts prior to her dream run to the last four in Paris this year and she is yet to lift a main tour title.

Zidansek has worked wonders to reach the semi-finals at Roland Garros, but only one of her five scalps have come against players ranked inside the world’s top 34.

Even the form of her opening-round win over seventh seed Bianca Andreescu, who has played very little tennis over the last few seasons and recently withdrew in Strasbourg, is open to debate. And while wins over Sorana Cirstea and Paula Badosa are respected, Pavlyuchenkova has outperformed classier opponents in Paris this year.

The world number 32 has recorded three-set wins over the brilliant Belarusian duo Aryna Sabalenka and Victoria Azarenka, as well as accounting for capable Kazakh Elena Rybakina.

The powerful Russian is making fewer enforced errors, too, and may be too streetwise for her younger competitor.