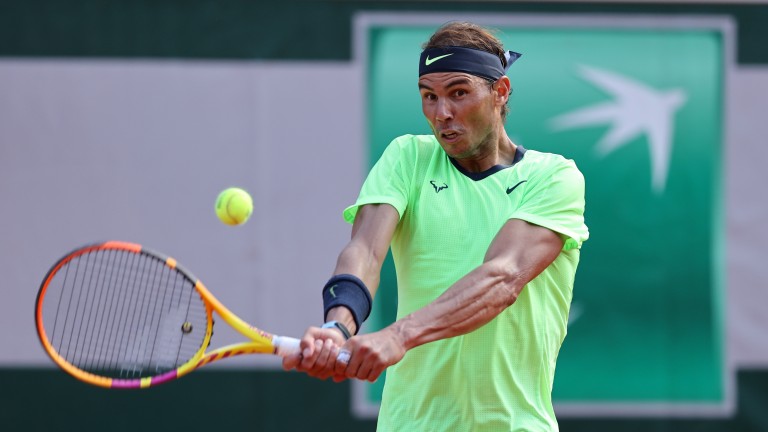 Rafael Nadal dropped his first set of this year's tournament against Diego Schwartzman but the Spaniard still dominated the Argentinian in their quarter-final clash
Clive Brunskill
1 of 1
By Adrian Humphries 3:30PM, JUN 10 2021

Early quotes of 4-6 about Rafael Nadal making light of a handicap start of 3.5 games in his French Open semi-final clash with Novak Djokovic on Friday didn't last long.

And that's not surprising because while there is a wide range of handicap marks at which to back the 13-time champion – punters can choose to support Nadal from -2.5 at 8-15 to -6.5 at 13-8 – Djokovic is likely to find it difficult to overturn the Majorcan.

After opening with three straight-sets wins, Italians Lorenzo Musetti and Matteo Berrettini proved more of a handful for the world number one and top seed. Musetti led two sets to nil before inexperience cost the teenager, while Berrettini also took a set off the Serb.

Nadal dropped his first set of the tournament against in-form Diego Schwartzman but still prevailed 6-3 4-6 6-4 6-0 against the Argentinian – the King of Clay also posted 6-0 set wins against Richard Gasquet and Jannik Sinner.

Djokovic has looked to be labouring a little in his last two outings. Aged 34, it's possible he may be feeling the pace on the slow courts, so don't rule out Nadal adding to his list of bagels against his great rival.

And the fact we're talking about possible bagel sets in this humdinger could be a big plus for anyone considering supporting Nadal to cover a games handicap.

Nadal took Djokovic apart 6-0 6-2 7-5 in last year's Paris final. The favourite's heavy topspin serves aren't bouncing quite as high as they were in last autumn's clay championship, but that's unlikely to prevent usual service being resumed in their semi-final rumble.

Stefanos Tsitsipas won his only previous encounter with Alexander Zverev on clay 7-5 3-6 6-2 in Madrid in 2019, but the German leads their personal series 5-2 as the pair clash again in the last four at Roland Garros.

Tsitsipas did a fine job of nullifying the potential threat of second seed Daniil Medvedev when defeating the Russian 6-3 7-6 7-5 on Wednesday.

The fifth seed has dropped only one set in the singles, against in-form John Isner, and Tsitsipas has been the subject of early support after his Medvedev dismissal.

Tsitsipas ought to triumph – his clay game is getting better and better – and he deserves a French Open final berth after a campaign in which he won titles at the Monte Carlo Masters and in Lyon and made the final in Barcelona.

Since fighting back from two sets down to compatriot qualifier Oscar Otte in round one, sixth seed Zverev has not dropped a set and his last two victories, against Kei Nishikori and Alejandro Davidovich Fokina, both finished 6-4 6-1 6-1.

But while the German has been crushing some decent opponents, Zverev may well be found out by Tsitsipas on clay.

Punters can consider backing the match to feature a tiebreak, which has happened in three of their seven best-of-three clashes, or Tsitsipas to successfully concede his opponent a handicap start of 3.5 games.

However, considering Zverev is still likely to be prone to more errors under pressure, have an interest on the favourite to win without the need for a fifth set.