Derrick Henry can hoover up the yards in Kansas City 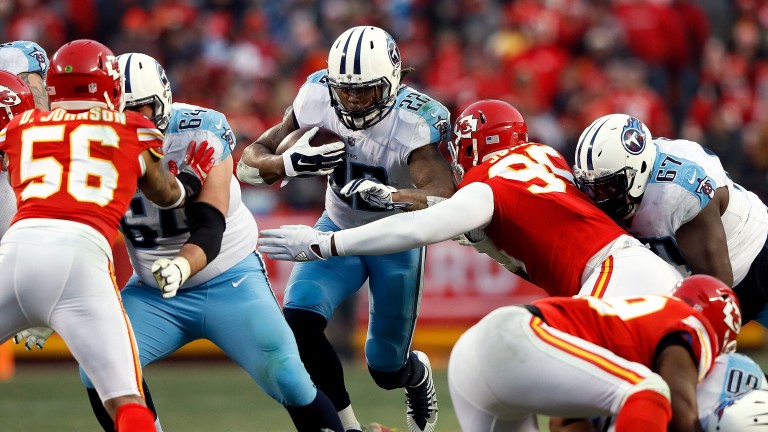 Tennessee running back Derrick Henry has had over 100 rushing yards in seven of his last eight games
Jamie Squire (Getty Images)
1 of 1
By Andrew Wilsher 3:46PM, JAN 18 2020

Just over two months ago, Tennessee hosted Kansas City in a regular season game that few expected them to win. They were on a 4-5 record with a struggling offence, and unlikely to make the playoffs. They won that game 35-32, and haven’t looked back since.

The Titans have been the Cinderella story of the postseason, overcoming the odds to beat reigning champions New England before shocking number one seeds Baltimore last week. Now Kansas City stand between them and a place in the Super Bowl.

The bulk of their success has been down to running back Derrick Henry, who has posted more than 100 rushing yards in seven of his last eight games, and will be relied upon once again to do the business against the Chiefs.

Kansas City allowed the seventh-most rushing yards during the regular season, but they have vastly improved against the run. In their last five games, the most a single player has rushed for is 57 yards.

However, the key to Andy Reid’s side is their own sheer dominance on offence, which was on full display last week in their 51-31 victory over Houston where they scored a touchdown on seven consecutive drives.

Sub-zero temperatures are forecast but the action promises to be red-hot, and although the odds are against them the Titans will have the confidence and belief they can win this.

Henry had 188 rushing yards and two touchdowns in that victory over the Chiefs, and given the way he has been performing you wouldn’t rule out him putting up those sorts of numbers again.

FIRST PUBLISHED 3:46PM, JAN 18 2020
Sub-zero temperatures are forecast but the action promises to be red-hot