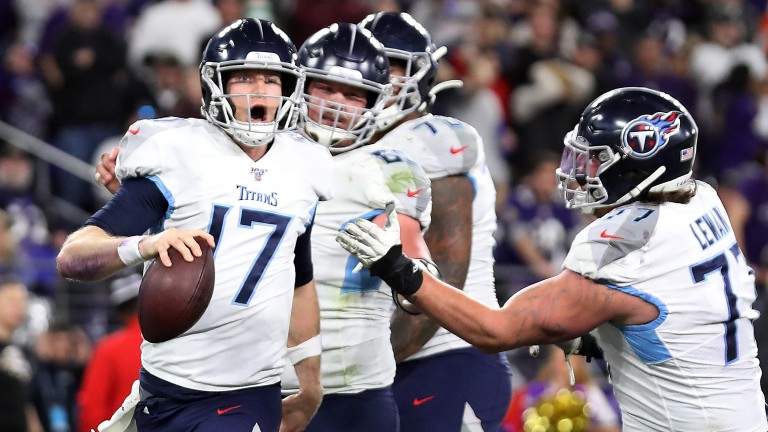 The Tennessee Titans celebrated a shock success over the Baltimore Ravens
Getty Images
1 of 1
By Ian Wilkerson UPDATED 10:50AM, JAN 18 2020

The Super Bowl market was blown wide open on Saturday night when red-hot favourites the Baltimore Ravens suffered a shock defeat to the Tennessee Titans.

The Ravens had lost only twice during the regular season and had been 21-10 to lift the Vince Lombardi Trophy before the clash in Maryland.

However, the Titans, who beat reigning champions the New England Patriots in the wildcard round, inflicted a 28-12 defeat on the favourites to the delight of punters who backed them at 7-2 to win the match.

Tennessee had been 30-1 outsiders to claim their first Super Bowl on Saturday morning, but are 7-1 for glory heading into their AFC Championship game with the Kansas City Chiefs, who are 11-8 Super Bowl favourites.

The Chiefs beat the Houston Texans 51-31 in a crazy game at Arrowhead Stadium on Sunday, when they came back from 21-0 down after the first quarter.

San Francisco 49ers are not far behind them in the Super Bowl betting at 13-8 after they beat the Minnesota Vikings 27-10 in Saturday's early kick-off.

The Niners, who are the number one seeds in the NFC, will host Green Bay after the Packers overcame the Seattle Seahawks 28-23.