Ten factors that could decide result 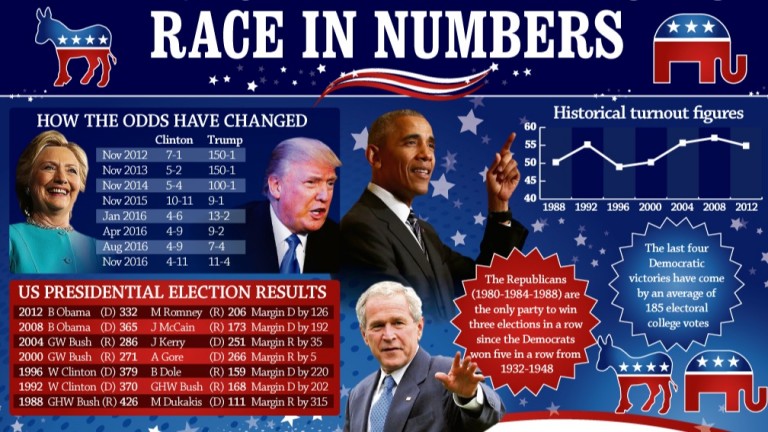 1 Hillary Rodham Clinton
In among the furore surrounding her opponent’s candidacy it has been easy to forget that America is odds-on to elect its first female president.

The Chicago-born former lawyer, First Lady, Senator and Secretary of State has been in the firing line of the Republicans for years but even a relentless onslaught from opponent Donald Trump over her use of a private email server when in government has failed to knock her out of her stride.

A bout of ill health during the campaign was claimed to be a weakness by Trump but the main knock on HRC has been mostly reflected embarrassment from her husband’s behaviour in office (and in the Oval Office in particular) and her links to big business. Her meticulous preparation for the three TV debates was mocked by her opponent but she was judged to have won all three by most neutrals.

2 Donald J Trump
Impartial observers not touched by the brush of American celebrity culture might ask how Donald Trump, who appears temperamentally unsound and to have a host of undesirable personality traits, could ever have been considered as a presidential candidate.

But from unpromising beginnings, the property mogul found a way to get his name on the Republican ticket just as he has done on so many gold-fronted skyscrapers.

The US host of the TV show The Apprentice has shrugged off past business failures, become the first candidate ever to refuse to release his tax returns and claimed he was “smart” for finding ways not to pay the taxes he wants to be in charge of collecting.

A pitifully weak field of primary opponents meant he was able to bluster his way through to the brink of having the nuclear codes even though aides have reportedly had to confiscate his mobile phone to prevent him making more misguided tweets.

He must have something in his favour, though, and the ability to whip up his supporters into a frenzy cannot be denied. Whether, rather like Jeremy Corbyn in the UK Labour party, he merely excels at preaching to the converted and won’t be able to attract undecided voters we will soon find out.

3 Barack Obama
The 44th president of the United States’ positive approval rating is a boost to the woman 14 years his senior who aims to make it three Democratic victories in a row for the first time since the second world war.

Gerald Ford, Jimmy Carter and George Bush senior and junior were all struggling with the public when their party lost the next election.

Dwight Eisenhower (1960) and Bill Clinton (2000) both handed over in decent shape only for their parties to suffer narrow defeats, which looks likely to be the worst fate Mrs Clinton will suffer.

4 Swing states
More than half the states are hard to shift from their red Republican or blue Democratic colours on the map. In 2012 only four states were decided by less than five per cent and this time the few that could go one way or the other are Florida, with its 29 Electoral College votes, Colorado, Nevada, New Hampshire, Ohio, Pennsylvania and North Carolina.

5 Women
The first female candidate is standing but gender has become a larger factor in this election due to the outlook of the male candidate.

Trump’s chequered history and denigration of women have put him way behind in the race for female votes even before the traditional gender-sensitive topics such as abortion are considered.

6 Race
In 1976, 11 per cent of the electorate was non-white. In 2012 it was 28 per cent and polling suggests this key group are solidly behind Clinton, or rather anti-Trump.

The Latino vote in particular is likely to be crucial in several states after Trump’s anti-Mexican stance and registrations of new Latino voters have been high in key areas such as Florida, New Mexico and Nevada.

With Barack Obama, American’s first black president, off the ticket for the first time in eight years, the non-white vote for the Democrats could have dropped, but the Republicans’ choice of candidate has surely dampened this effect.

7 Education
In a UK election, the question of education refers to the debate on grammar schools and academies and university grants, but in America the key question is the level of education of the voters.

The key group this time are college-educated white voters who favoured Republican Mitt Romney in 2012 but have been leaning to Clinton this time around.

Trump has a clear edge in areas where most voters left school before college.

8 Dirty tricks
There’s no shortage of potential intrigue here, and who
could blame an ethnic minority voter if they were afraid to visit a polling station after reports of armed Trump supporters ‘supervising’ the polls?

There have been multiple stories of attempts to suppress registrations, signs incorrectly stating that voters need photo ID, and even a ruse suggesting to Democratic voters that they can vote for Hillary by text and need not visit the polling stations, but these shouldn’t have a huge effect on the overall national outcome.

The biggest dirty trick concerns the shape of the constituencies in the House of Representatives battles where some spectacular gerrymandering goes on, enabling whichever party is in power to try to concentrate as many voters of their rival party in as few districts as possible.

9 Celebrities
Clinton’s list of celebrity endorsements includes Beyonce, Cher and George Clooney, while having Cleveland Cavaliers basketball star LeBron James introduce her at a recent rally in the key state of Ohio can’t have done any harm.

The biggest celeb in Clinton’s corner, however, is current First Lady Michelle Obama, who has the highest popularity of any political figure in America.

For a man who hosted seven seasons of the Celebrity Apprentice, Trump’s high-profile fans are thin on the ground, although Clint Eastwood, Mike Tyson and Hulk Hogan have pledged their support.

10 Turnout
Traditionally when turnout is high the Democrats have a stronger chance of success and vice-versa. Trump’s polarising personality appears as likely to make those not inclined to support him more determined to vote against him as it encourages his fans to go to the polls.

Donald appears to be lacking a Trump card

Hillary Clinton has shortened in the betting since Sunday when the FBI again decided she will not face criminal charges over her private email server, and a relatively comfortable Democratic victory looks the most likely outcome.

Respected American forecaster Nate Silver and his FiveThirtyEight site yesterday predicted her chances of victory at 66 per cent with Donald Trump on 33.9.

Throughout the campaign the site’s forecasts have been more cautious about the Democrats’ chances than some others and it’s possible that with no sign of a late Trump card, so to speak, that they could exceed the predicted Electoral College vote tallies of 293.6-243.6 in favour of the Democrats.

Trump doesn’t appeal even at 9-2 to spring a surprise and taking Betfair’s 5-2 that Clinton secures 300-329 EC votes could be the way to go.

To make it closer than that Trump would need a landmark success such as Florida and the vote appears to be going away from him there despite the support of the nation’s largest retired community.

A bigger factor in key areas is the Hispanic vote and Clinton should take the Sunshine State at 4-9.

The tightest race in the country could be in North Carolina, and the Democrats should edge it if Clinton is to prevail.

High numbers of unaffiliated voters have registered in NC, and they may well be a young, liberal-leaning group. Primary rival Bernie Sanders has campaigned strongly for Clinton there.

A Donald Trump victory would be a bad result for many bookmakers after punters latched on to the Republican when he was considered a joke candidate at triple-figure prices.

Love him or hate him, everyone is having to treat Trump seriously now, although Hillary Clinton is the 2-9 favourite in the Las Vegas casinos, with Trump 11-4.

Bookmakers are wary after getting the results wrong at the 2015 general election (said to be close only for a clear Conservative victory) and June’s EU referendum (Remain was a strong favourite but Leave won).

Hills say that 69 per cent of the bets they have taken have been for Trump, but 74 per cent of the money is for Clinton. “The campaign has mirrored Brexit in that there have been more bets for the outsider, but the biggest wagers have been on the favourite.”

Bet365’s Aaron Bell said: “The polling failure at the 2015 general election and the media failure on Brexit makes Trump winning seem more viable. But our base expectation is a reasonably comfortable Clinton win – the 300-329 favourite may actually be a spot of value.”

Coral’s David Stevens said: “The tide has definitely turned and big-hitting punters only want to be with Clinton. We have shown a degree of caution as the market didn’t go the right way in last year’s general election or prior to the EU referendum vote.”

Betway’s Alan Alger: “We think voters will take a ‘lesser of two evils’ approach and move towards Hillary.”

However, Matthew Shaddick of Ladbrokes is not ruling out a shock Trump victory. “My headline view is that Trump is way too big and I’m surprised how confident the markets have become in Hillary,” he said.

“I’m not sure I could find a better bet than just backing Trump outright. A very narrow vote-share victory for Hillary could still lead to a Trump electoral college win.”

Betfred have been delighted with turnover according to spokesman Peter Spencer. “We have been astonished. We have already taken £2m-plus which is the amount bet on the general election and EU referendum combined.We expect another £1m to be wagered.”

Paddy Power were so confident they’ve already paid out on a Clinton victory but they think it might be narrow. “We like 270-299 for Democrats in the electoral college,” said Feilim Mac An Iomaire.