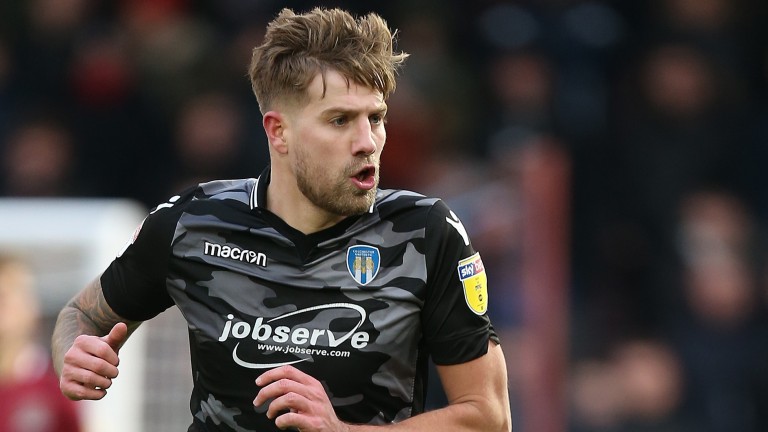 Salford started both halves the better but in each period it was Colchester who finished stronger and that eventually proved decisive as Harry Pell nodded in an injury-time winner for the Essex hosts.

It felt slightly harsh on Salford although Colchester had 60 per cent possession, forced 19 shots to the visitors' nine and the efforts in the box statistics were 12-4 in favour of the winners.

Colchester created the best chances but there would not have been huge shouts of injustice had an average game finished goalless.

Graham Alexander's side played 4-4-2 and the frustrated former Scotland international wanted his players to be more confident in possession.

If you had had a pound for every time he turned around and swore at his assistants with each wayward pass you would have soon caught up with Salford's rich and famous owners.

Alexander switched tall striker Jake Jervis and small winger Danny Lloyd at half-time, presumably in an attempt to try to get Salford to pass the ball better rather than hit hopeful punts.

That tinker worked okay and substitute Craig Conway then played deeper in a 4-2-3-1 once he replaced Lloyd.

Left-back Daniel Jones's long throw is a decent weapon and centre-backs Cameron Burgess and Liam Hogan blocked most of the stuff that came into the penalty box.

Richard Towell looked the class act for Salford when in possession but Colchester seemed to make a point of trying to stop him getting on the ball in deeper positions.

Top scorer Adam Rooney was an unused substitute and Salford lacked a cutting edge. They were also wasteful with Lloyd culpable when counter-attacking opportunities presented themselves.

They have lost all six matches against teams currently in the top eight of Sky Bet League Two which does not bode well for the next two fixtures against second-placed Exeter and sixth-placed Bradford.

Salford would have been expecting more of a return than one league goal at this stage from central midfielder Towell, who has also notched in the EFL Trophy and FA Cup.

Towell had a couple of decent attempts at Colchester and shot wide from the edge of the box with what was arguably City's best chance.

"I'm devastated. We did not deserve that. I thought we were excellent in the second half and to get that in the final minute was a dagger. It was a crap goal to concede."

Salford were among the early favourites for this division but that assessment was well wide of the mark. They should finish around mid-table which is below-par given the financial backing from Manchester United's Class of 92 and Valencia owner Peter Lim.

How did Colchester United play?

They are strong defensively but their promotion dream could be hampered by a lack of cutting edge.