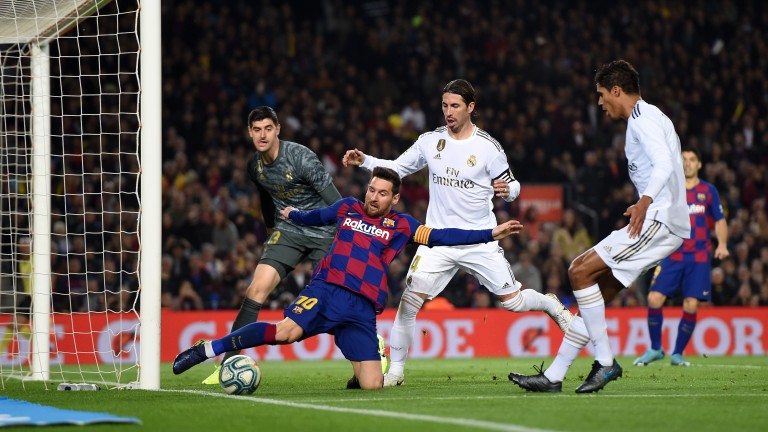 A draw was the fair result, although Real Madrid were the more complete side and dominated chunks of the contest even if the best chance fell to Lionel Messi who, for once, fluffed his lines following excellent approach play from Antoine Griezmann and Frenkie de Jong in the second half.

Madrid definitely had the better of the first period with Casemiro's header cleared off the line before Messi's effort got a similar treatment. That was on the half-hour mark and was Barca's first attempt on goal.

Zinedine Zidane's side pressed high, making the pitch compact and adopted a similar 4-3-1-2 shape to the recent 2-2 draw with Paris St-Germain.

Fede Valverde, Casemiro and Toni Kroos played as a narrow midfield three with Isco in the number ten position behind Karim Benzema and Gareth Bale, who often drifted out to the right wing.

Left-back Ferland Mendy was tasked with providing the width on the opposite flank and this could well be Zidane's template for big matches in the future.

Not that long ago Real Madrid's midfield looked stale and leggy but taking out Luka Modric for Valverde has made a massive difference, while the reintroduction of Isco seems to give better balance.

Kroos is getting back towards his best form and for large parts of this contest they dominated midfield, helped by having an extra man with Casemiro arguably man of the match.

Given how well Madrid played and how comfortable the visitors were for large spells they didn't create enough clear-cut opportunities.

Madrid had a lot of efforts from the edge of the box which brings Kroos and Valverde into the equation but it was Bale who can take most from this game.

He had a couple of sights of goal, including one "goal" which was ruled out for a tight offside on Mendy in the build-up as he assisted the Welshman.

"We played a good game. We lacked that extra bit to score but we must be happy."

This was far from a classic El Clasico - the first 0-0 in 17 years - and probably explains why neither is overly fancied in the Champions League.

However, on this evidence Real Madrid must fancy their chances of winning La Liga at least.

Eden Hazard will add another dimension to the attack once he returns from injury and the potentially pivotal return contest will be at the Bernabeu.

How did Barcelona play?

Barcelona increasingly resemble Argentina - a team of individuals where the main tactic is to hope that Messi can be the difference.

It works fine against the weaker opponents, however, when they are upped in class it becomes a different story.

There is no great collective idea or fluency to their play and it would be a surprise if they won the Champions League this season unless Ernesto Valverde can find a solution to Barca's laborious ways.