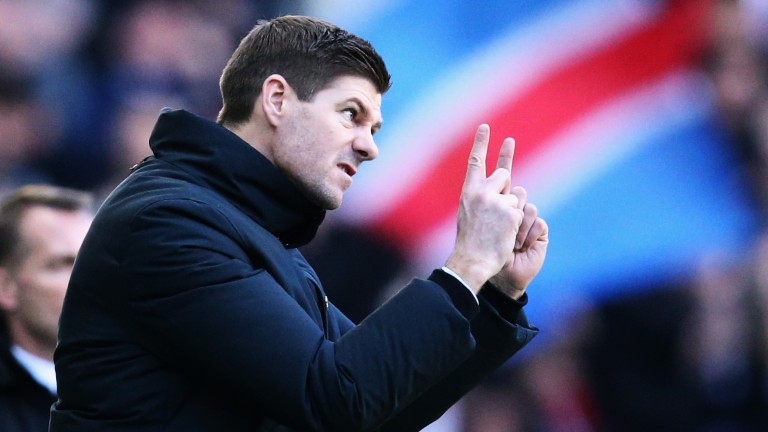 This was a dominant performance from Rangers, who had ten shots on target to ten-man Hibernian's one, and the Easter Road encounter was virtually over as a contest inside ten minutes as Steven Gerrard's visitors raced into a two-goal lead.

Ryan Kent took advantage of goalkeeper Ofir Marciano's poor clearance before turning provider for Joe Aribo, who allowed the pass to roll across his body and found the corner sweetly.

Aribo was denied by Marciano as Rangers threatened to run riot and Jermain Defoe made the points safe with a trademark finish.

Ryan Porteous was then deservedly sent off after an incident which sparked ugly scenes in the dugout and in the stands.

Gerrard went with a 4-3-3 formation and he will have been delighted to see Hibs line up in a diamond, which left Rangers' players in acres of space in wide positions.

The switch of play was on at all times in the first half and wide players Kent and Aribo both scored, while it was easy for Rangers to get out through full-backs James Tavernier and Borna Barisic.

Rangers' front six all showed up well and those in the three most forward positions - Defoe, Kent and Aribo - scored but the midfield trio of Scott Arfield, Ryan Jack and Glen Kamara also deserve credit.

They were outnumbered by Hibernian's four central midfielders when it was 11 v 11 but they still controlled that crucial area.

It was difficult to find fault with this Rangers performance on what was supposed to have been a tricky test at a difficult venue without suspended star striker Alfredo Morelos.

If you were being ultra-critical maybe Rangers should have gone for more goals when Hibs were down to ten men. Goal difference may yet play a part in what is expected to be a tight Ladbrokes Premiership title race with Celtic.

Aribo is a 10-1 shot to score first against Kilmarnock at Ibrox next time out and that price may not reflect that Gerrard is using the silky-skilled former Charlton man in a more advanced position.

He scored once at Easter Road and missed two other decent opportunities in his 75-minute stint.

"We have come here and put in a really strong performance. We thoroughly deserved the win - Hibs couldn't deal with our intensity and quality."

If Rangers continue in this form they will push Old Firm rivals Celtic close in the title race but the Bhoys have been a bogey side for them, including their victory over Gerrard's side in the Betfred Cup final.

Rangers dominated that game despite losing and the 3-1 they gain revenge in the William Hill Scottish Cup could be worth a bet.

How did Hibernian team play?

Hibs changed to a 4-2-3-1 shape at half-time and with hindsight Jack Ross would have not started with a diamond. They were totally outclassed, but the formation did not help.