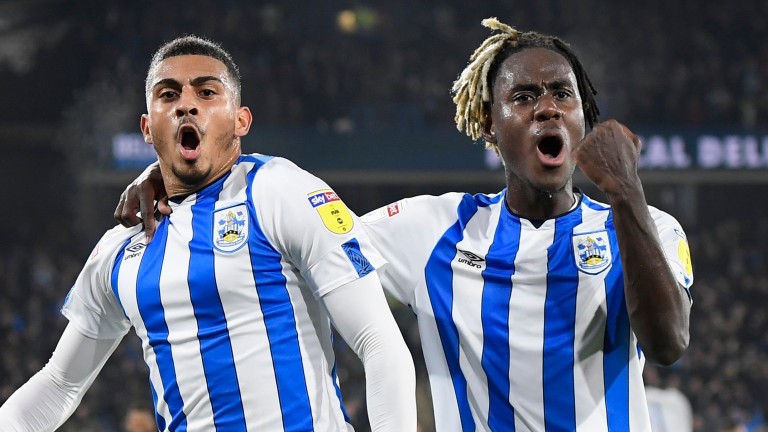 Huddersfield will feel aggrieved that they were unable to turn their dominance into maximum points as Town had the better of their 1-1 draw against Swansea, but the hosts failed to create a stack of big opportunities in a feisty battle.

Jay Fulton scored for Swansea after Huddersfield failed to clear a corner before a fortuitous equaliser from Karlan Grant just before half-time turned the tide Huddersfield's way.

Alex Pritchard had a couple of long-range efforts saved and Fraizer Campbell was inches away from converting a fizzing cross, although Sam Surridge nearly nicked an undeserved Swansea winner in a frantic finale which saw Town's Trevoh Chalobah sent off.

Danny Cowley went with a classic 4-2-3-1 template of two sitting midfielders which included a tackler in Jonathan Hogg and a passer in Chalobah, while Pritchard was used as a playmaker.

It's what Jose Mourinho referred to recently as a "closed triangle" with Eric Dier (tackler), Harry Winks (passer) and Dele Alli (number ten) and a shape made famous by Rafael Benitez's success at Valencia with Ruben Baraja (passer), David Albelda (tackler) and Pablo Aimar (number ten).

Most of Huddersfield's best work went through Chalobah and Pritchard.

The Terriers boast good pace out wide and Pritchard caused problems between the Swansea lines, while centre-backs Christopher Schindler and Jon Gorenc Stankovic were comfortable enough on the ball to start attacks through to Chalobah.

They did not look great when defending set-pieces and Campbell has scored only twice. Maybe top-scorer Grant is wasted out wide, although Cowley says Campbell "gives us such energy and carries the fight".

Pritchard has had six shots in his last two matches and three of those came against Swansea.

They are pretty low grade in terms of location but it surely won't be long before Pritchard breaks his duck for the season.

"We are disappointed not to win the game. We were pleased with the performance, pleased with the energy and the intensity that we played at. It was certainly the highest physical output since we’ve been here so we’re definitely improving in that area.

"Our overriding emotion is probably disappointment that we didn’t find that (winning) goal, particularly when you consider how many chances we had in the second half.”

Huddersfield are clearly heading in the right direction - they have lost only one of their last ten matches and are putting down the foundations already with one eye on pushing on next season.

Town are better than the Sky Bet Championship table suggests and should be up towards mid-table soon enough.

How did Swansea City play?

Swansea retain the pretty passing patterns left over by Graham Potter but without the positional rotation which made them such a fascinating watch.

Steve Cooper's outfit remain unbeaten on their travels, although they finished with two youngsters at centre-back because of injury and City could be running out of puff.

Others have much better claims of making the playoff picture.