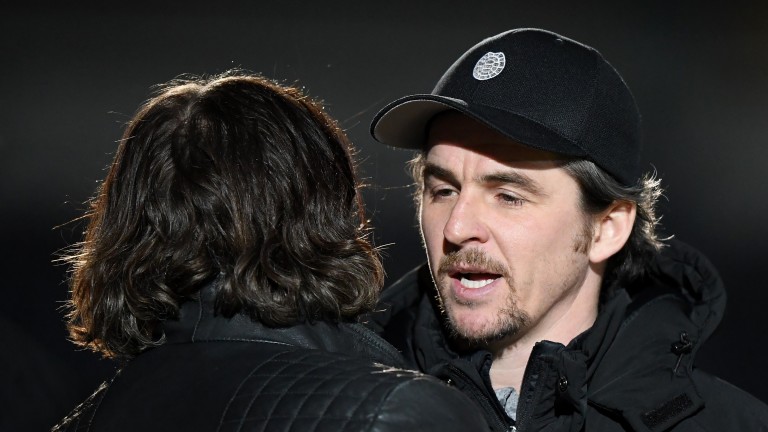 This was a vital win for Fleetwood as they moved back into the top six of Sky Bet League One with a 1-0 victory over Ipswich in a poor Portman Road encounter.

That was more down to the hosts, who failed to register a shot in a tepid opening half, and Fleetwood seemed to be playing within themselves after substitute Ched Evans scored on 40 minutes.

Evans took advantage of sluggish defending from Luke Chambers and even worse goalkeeping from Tomas Holy, although Ipswich did improve after the break when matching the visitors' 4-4-2.

Alan Judge and Jon Nolan had efforts cleared off the line and youngster Tyreece Simpson went close but Fleetwood held on.

Joey Barton's side knocked it about quite nicely early on in a 4-3-3 formation which included the modern shape of a tucked-in full-back (Lewie Coyle) on the right and a far higher one (Danny Andrew) on the opposite flank when Fleetwood had possession.

However, the suspended Barton, who had to watch from the stands, was dealt a blow when Callum Connolly went off injured. While his replacement Evans was on target, there was a loss of shape in central midfield as Glenn Whelan and Paul Coutts failed to dominate.

Coutts and Whelan have played at a higher level and are good on the ball and there is a robustness to Fleetwood, who have conceded more than once on only one occasion in 2020.

The giant Harry Souttar is a rock at the heart of the defence and they are well suited to playing against the better sides in League One, losing just one of 11 fixtures against the current top eight.

Evans and Paddy Madden didn't seem like a perfect strike partnership and Barton may want to go back to a third midfielder in future just to help the team gain more control.

Winger Barry McKay got his first Fleetwood goal in the recent draw at Sunderland and plays narrow on the left to allow Andrew to overlap.

"I was worried we were getting drawn into the negativity. When we played at our tempo in the first half I don't think they could get near us. We're a dark horse but we're in the shake-up."

It's almost certain to be a high-class playoff line-up and Fleetwood, who had 88 supporters at Portman Road, definitely won't be the biggest in the field but they would be difficult to see off.

Since late January they have beaten Wycombe, Ipswich, Portsmouth and Peterborough as well as drawing against Coventry and Sunderland. They should make the playoffs.

How did Ipswich Town play?

This was another woeful night for Paul Lambert, who made six changes from the team beaten at Blackpool on Saturday, but walked off to a chorus of boos, mainly aimed at owner Marcus Evans.

It is now six defeats in eight for Ipswich, who have only one win against a current top-ten side all season. Leaders Coventry will be licking their lips at the prospect of tackling the Tractor Boys on Saturday.

Ipswich have a cracking run of fixtures to end the season with home dates against Southend and Bolton in April but most of the squad look to have given up hope of promotion judged on this effort.