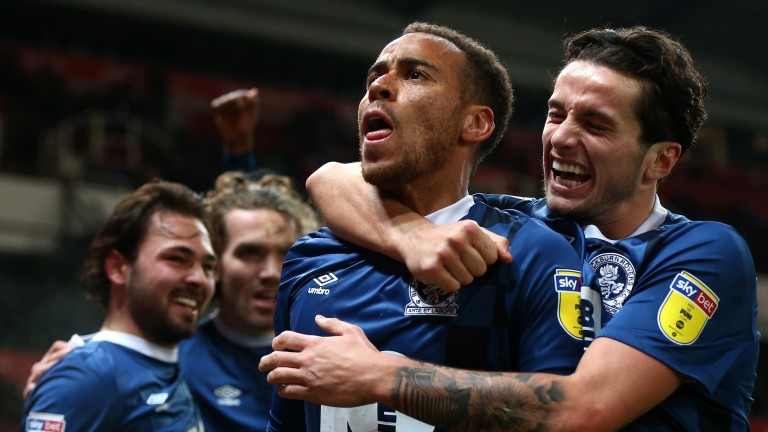 A late winner from substitute Sam Gallagher sent the Blackburn squad to their Christmas party in London on Saturday night in high spirits, but it was a fortunate success at the bet365 Stadium.

Blackburn bossed the early exchanges and deservedly led through Bradley Dack's scrappy goal, although that was one of only six shots Rovers mustered in the entire match.

After a slow opening 25 minutes, Stoke grew into the match and passed up a number of opportunities through Sam Vokes, Tom Ince, Scott Hogan and Mame Diouf, who saw his effort cleared off the line, before finally equalising when visiting goalkeeper Christian Walton made a total mess of a corner.

It went down as a Corry Evans own goal but Stoke made a metaphorical own goal themselves as they over-committed looking for a winner and were done on the break.

All Tony Mowbray sides like to have the ball and Rovers dominated possession, cleverly using a fluid and narrow 4-2-3-1 formation to bamboozle the Potters in the opening quarter.

Joe Rothwell was nominally playing on the left of the three but caused problems behind Joe Allen in between the lines and as Stoke's wide men got dragged inside it only opened up the space for the full-backs, especially the impressive Stewart Downing on the left.

However, the fear in the Rovers camp pre-match was that the players might lack energy as they had put plenty into Wednesday's win over Brentford, and that quick turnaround had an effect.

Interestingly, it was two fresher subs - Elliott Bennett assisted Gallagher - who combined for the winner.

Mowbray picked centre-backs Tosin Adarabioyo and Darragh Lenihan out for special praise but the two in front of them - Evans and Lewis Travis - were neat in midfield.

Dack has a touch of class and Rothwell started well but drifted out of the game.

Apart from Dack there is not much a goal threat.

Danny Graham was the man trusted with playing the lone striking role without ever looking like he would trouble Stoke and Gallagher was barely noticed until he scored.

That may be an area of interest for Mowbray in January, while jittery keeper Walton was at fault for the goal. That was far from his only mistake this season.

Dack has scored four goals in his last three appearances and ten in all competitions this season. He was Blackburn's biggest threat and takes up good positions in the final third.

"We controlled the first half and it was a good result. I'm delighted for the players. We were decent with the ball and I think you could feel the anxiety in the stadium."

Blackburn are bang in mid-table and that looks about right.

How did Stoke City play?

Stoke did not deserve to lose but they now find themselves in an almighty scrap to stay in the Sky Bet Championship.

Michael O'Neill tried four different formations (4-1-2-3, 4-2-3-1, 4-4-2 and three at the back) and they grew into the game with Diouf making a positive impact. There should be three worse teams but confidence is clearly low and O'Neill has plenty of work on.