Tampa Bay at Carolina: betting preview, free tips, lowdown and when to watch

Buccaneers and Panthers offences may not threaten high points line 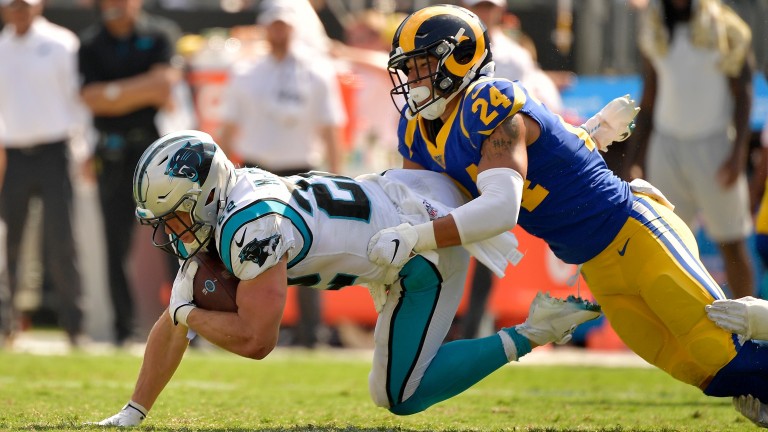 New Orleans Saints were the only NFC South team to claim a victory in the opening week of the new NFL season, so Carolina and Tampa Bay will both be anxious to claim a win in their first divisional clash of the campaign.

Both teams will have to buck recent trends to do that as the Panthers, who suffered a 30-27 reverse against the Los Angeles Rams, have won just one of their last nine games.

Meanwhile, the Buccaneers have lost their last five after as two pick-sixes from quarterback Jameis Winston helped San Francisco claim a 31-17 success over them on Sunday.

Both defences struggled in their opening encounter but it looks as if the Thursday Night Football total-points line may have been pushed too high.

The teams conceding so many points has encouraged the high line, but the quality of the offences on display may not back that up.

Winston cannot be regarded as one of the league's stronger quarterbacks and he has won just six of his last 23 games for Tampa Bay, with 12 straight road defeats.

His offensive line provided him with precious little protection against the 49ers - he was hit on six occasions and sacked three times - and it is difficult to see them threatening Carolina.

Most of the Panthers' offensive efforts will centre on Christian McCaffrey, who is one of the best catching and rushing running backs in the league.

McCaffrey scored twice and clocked up 208 total yards against the Rams, but he can't do it all on his own.

It was noticable that quarterback Cam Newton, who we are used to seeing charging around, did not play much of a part in the running game against San Francisco and there have to be questions as to whether his summer shoulder surgery played a part in that change of approach.

Perhaps this will be another game he feels his way into but the value appears to be in betting against a thriller in Charlotte.

Tampa Bay
Safety Justin Evans has been placed on injured reserve with an Achilles injury. Cornerback Ryan Smith is serving a four-match ban.

Carolina have won five of their last six home games against Tampa Bay.

FIRST PUBLISHED 3:32PM, SEP 11 2019
McCaffrey scored twice and clocked up 208 total yards against the Rams, but he can't do it all on his own