Talented Wawrinka can reign on clay for a second time 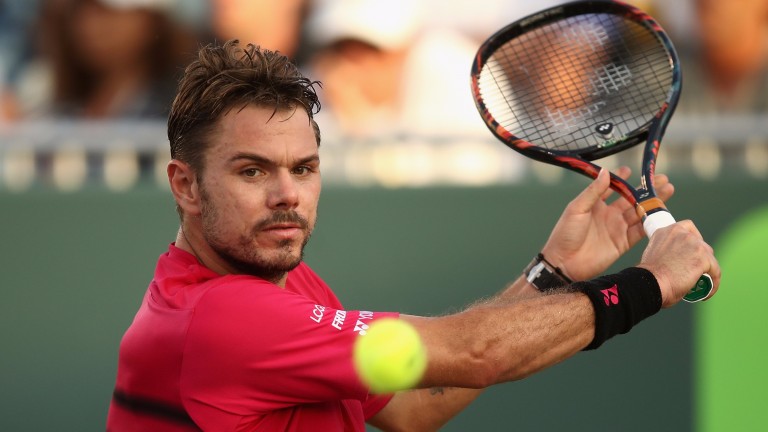 Stan Wawrinka is good enough to dominate on the slow red courts again
Julian Finney
1 of 1
By Joe Champion 12:23PM, MAY 29 2017

Champion’s top tip
Stan Wawrinka 12-1
Rafael Nadal is unquestionably the man to beat at Roland Garros this year. The brilliant Spaniard has enjoyed the bulk of his Grand Slam success on the red courts of Paris and he has been in fine form in the build up to his attempt at sealing La Decima.

Nadal has already notched his tenth victories in Monte Carlo and Barcelona this season and he added a fifth Madrid crown to his considerable trophy haul earlier this month.

He met with his only loss of the clay season when outgunned by Dominic Thiem in Rome last time out but Nadal is demonstrating that, at 30, his desire to perform at the highest level remains undiminished.

But is the king of clay decent value at odds-on?

There’s a chance that he could waltz to the title but it’s almost three years since his last Roland Garros victory and, with plenty of dangers in pursuit, he could be worth opposing.

Novak Djokovic and Andy Murray are the obvious two, but neither has looked close to top form this season and it could be another multiple Grand Slam champion who represents better value.

Stan Wawrinka has won titles in Melbourne, New York and Paris and should not be dismissed after being placed in the opposite side of the draw to Nadal and Djokovic.

The Swiss star spent too long in the shadow of compatriot Roger Federer but his 2014 Australian Open victory marked a watershed moment in his career and he is a constant contender on the biggest stage.

The 32-year-old had struggled on the clay this season but his run to the title in Geneva points to Stan the Man coming into form at the perfect time. He is a different animal in Slams and should show his true colours on the Paris clay.

The number three seed has been drawn into a quarter featuring the French trio of Richard Gasquet, Jo-Wilfried Tsonga and Gael Monfils, all of whom are dangerous but have struggled to excel in Paris. They are joined by the ageing David Ferrer, the temperamental Fabio Fognini and Marin Cilic, who has a poor clay record.

Nick Kyrgios could cause the most trouble for Wawrinka if they meet in the last 16 but the Aussie firebrand is yet to deliver on the biggest stage and he has a tendency to switch from the sublime to the ridiculous.

Other selection
Alexander Zverev to win first quarter 7-2
The seedings suggest that Wawrinka will meet Murray in the semi-finals but the Briton is no certainty to make it that far as he seeks to win his first French Open.

Murray is still the world’s number one player but he has struggled to find his feet on the clay since his return from an elbow injury. He failed in Monte Carlo before bouncing back in Barcelona, but that proved a false dawn as the 30-year-old faltered again in Madrid and Rome.

He has been beaten by several inferior players recently and must negotiate a tough opener against Geneva semi-finalist Andrey Kuznetsov before a likely third-round tie against Juan Martin del Potro.

The betting suggests that he will face exciting Alexander Zverev in the quarter-finals. The 20-year-old confirmed his arrival as a genuine star with his first Masters 1000 victory in Rome, where he demolished Djokovic in straight sets in the final.

Older brother Mischa dumped Murray out of the Australian Open and the younger Zverev will fancy his chances of causing a minor upset should he meet the Scot.

A Grand Slam title may still be beyond the youngster at this stage in his career and he is probably too short in the outright market following his Foro Italico victory, but he is supremely confident in his own ability and could easily reach a semi-final in Paris.

Djokovic is always worth considering but the reigning champ must prove he has regained his joie de vivre in the French capital and he comes with the added negative of being drawn in the same side of the draw as Nadal, who dominated when the the pair clashed in Madrid.

The 12-time Slam winner fired his entire coaching staff at the beginning of the month and will be working with Andre Agassi for the first time in Roland Garros but the American great may not have an immediate impact on the Serbian. If he does then he is a massive player.

Thiem, a terrific clay-courter and a semi-finalist last year, has the talent to claim a first Grand Slam title but he is housed in the same half as Djokovic and Nadal.

The Austrian had already lost twice this season in finals against Nadal before he beat the clay legend in Rome, but Djokovic took him apart in the a 6-1 6-0 hammering in the following match so the 23-year-old will do well to beat both of them in the same tournament.