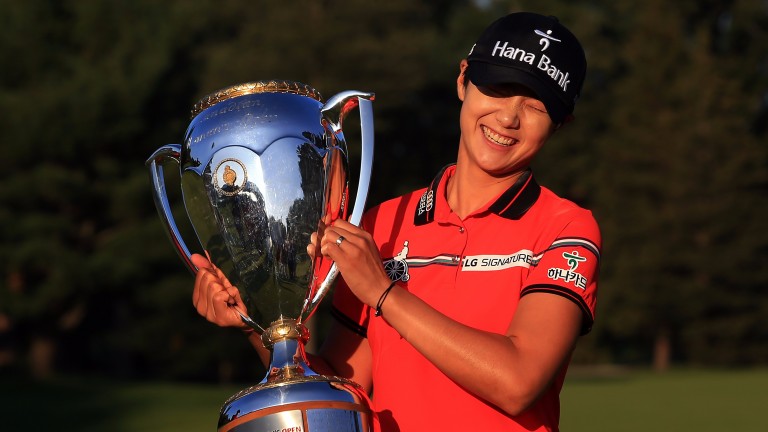 The French resort of Evian-les-Bains plays host to the final women's major of the year and it would be fitting if a European player could score a home win in the Evian Championship.

Unfortunately, feasible contenders are thin on the ground but England's new star, Georgia Hall, third in the Open and one of the few success stories on her Solheim Cup debut last month, will be full of confidence now that she has shown she belongs at the top table.

The 21-year-old from Bournemouth hasn't even won in Europe yet so it is asking a lot to expect her breakthrough to come in a Major with almost all the top Koreans and Americans barring her path, but a place at 50-1 pays better than the win bet on market leaders Lexi Thompson and Sung Hyun Park.

Thompson arrives having secured an emphatic victory in Indianapolis and if anyone is owed a Major, it has to be the Florida six-footer.

She was cruelly hit with a "trial by TV" retrospective four-shot penalty late in the final round in the first of the LPGA's five Majors, The Inspiration. So instead of cruising home by four, she lost a play-off to So Yeon Ryu.

Although she was runner-up to Lydia Ko at the 2015 Evian, it is not a course that panders to her exceptional length and she may again have to play second fiddle to Ko, who can get quick revenge for last week's Indy defeat.

Even second place was manna from heaven for Ko who had fallen rapidly down the rankings after major swing, club and personnel changes failed to have the desired effect.

One swallow does not make a summer but returning to the course where she bagged her first Major could well see the real Ko stand up. She will always be 50 yards behind Thompson off the tee, who for once out-putted her to win by four in Indianapolis.

Thompson has put in a lot of work on her putting and will not be easily beaten but one who has the tools to do it is Sung Hyun Park, runner-up at the Evian last year but since then winner of the US Open and, at the end of last month, the Canadian Pacific in Ottawa.

She is marginally the most talented of the young Koreans but, with last year's winner In Gee Chun and So Yeon Ryu close behind, that golf-mad country will be going all out to repeat their 1-2-3 of 12 months ago.

Yet another Korean, In-Kyung Kim, put them all in the shade in the most recent major, the British Open, her second victory from her last three starts and must be short-listed.

Time difference France is one hour ahead of the UK & Ireland

Course overview A tight parkland test that hosted the Evian Masters as an LPGA Tour event since 2000 in a European beauty spot close to the France-Switzerland border. It has been substantially altered in line with its upgraded status with a new name as an LPGA Major. All tees have been modified and fairways reworked with special attention given to the greens, all remodelled and made firmer with large surfaces allowing six different pin positions. More numerous and more ambitious obstacles, in particular water hazards, were created and deeper bunkers repositioned

Story of last year In Gee Chun led a Korean 1-2-3 to land her second Major by four from So Yeon Ryu and Sung Hyun Park. After sharing the lead with Park on 63 on day one, Chun went wire to wire

Weather forecast Cloudy, wet week and pretty chilly as well as the championship wears on, down from 17C tomorrow to 12C by Sunday

Weather forecast All four days are likely to be hit by showers. Temperature 19C tomorrow but becoming cooler during the weekend

Type of player suited to challenge Still not a long course even after all the changes, it rewards basic skills over power particularly now greater demands have been made on position and strategy