Take a plunge on Posh to maintain playoff push 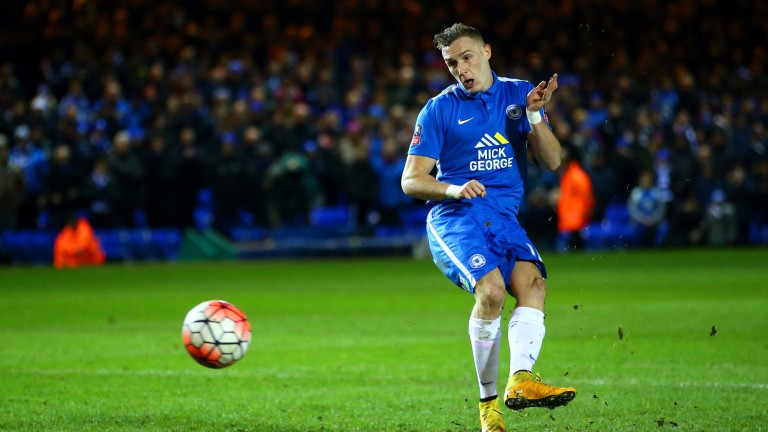 Marcus Maddison has been in good form for Peterborough
Richard Heathcote
1 of 1
By Steve Davies 8:57PM, JAN 2 2017

Punters who enjoyed the summer ritual of mocking Sheffield United’s place at the head of Sky Bet League One betting, aren’t feeling so smug now.

Four matches into the campaign and with one point to their name, how the doubters must have chuckled. Eighteen games later, the laughter has stopped – unless you’re a Blades backer.

The 6-1 pre-season jollies, who had flopped as favourites in three of the previous four campaigns, are now 11-10 for the title having roared ominously up to second and the Chris Wilder juggernaut is going to take some stopping.

A 1-0 home defeat by Walsall has been their only loss since August and, playing well and having already visited Scunthorpe, Bolton and Bradford – the other members of the top four – they have to be confident about their prospects.

They were 16-1 chances after the 2-1 loss at Millwall in August and shorter prices were quickly milked as United hit their stride.

Now, with the value gone, mid-season revisionists who need to dip back in will be looking elsewhere for a punt to keep them warm through the winter months.

With our pre-season colours nailed to the masts of Scunthorpe and Millwall we’re happy enough. There is nothing about Graham Alexander’s Iron to suggest they’re going to hit a wall – indeed their attacking options are such that they could very well stay the pace. The Lions, in contrast, are proving far too inconsistent.

Bolton and Bradford have looked strong in the first half of the season and are set to stick around. In fact the Trotters are as good as both the teams above them though 5-6 that they go up is short enough.

Phil Parkinson, seen as a long-ball exponent, actually mixes up the play nicely with Gary Madine the target man and plenty of runners off him, but they are also happy to play through sparky duo Zach Clough and Josh Vela.

The top two spots are probably between those three, which leaves promotion via the playoffs as the target for a dozen or so clubs behind them.

One side who catch the eye are Peterborough, 7-1 to go up.

Former Northern Ireland midfielder Grant McCann has brought some sanity to a team who were simply too much fun for their own good.

Thirteenth last season, they were the section’s highest scorers – but conceded more than Blackpool and Doncaster who were relegated.
Peterborough were an over-the-goals cash cow for punters, but McCann has offered a sense of order and they’ve improved accordingly.

They won just three of their first 11 matches and found themselves in 13th spot at the start of October. Since then they’ve been excellent and while beating struggling Bury and Chesterfield was expected, wins at Bristol Rovers and Charlton and a 1-0 triumph over Bolton merit more praise.

There’s a constant debate over the presence of would-be superstar Marcus Maddison, who seems to suffer from mood swings, but they are well organised by McCann and the impending return from injury of Jack Baldwin will be another plus.

Spurs youngster Luke McGee has impressed between the sticks and can stay until the end of the season and once owner Darragh McAnthony signs – as promised – another frontman in January, the jigsaw will be close to complete.

The upshot is that they are still scoring goals – only Scunthorpe and Sheffield United have bagged more – but the holes at the back have been sealed.