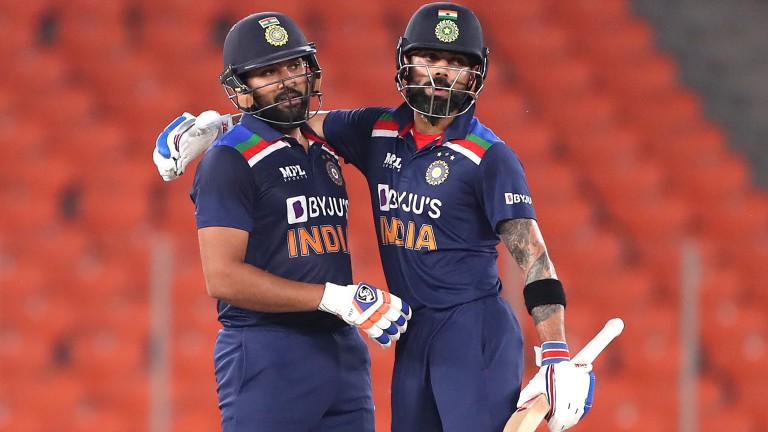 The dominant force in 50-over World Cups, Australia have reached only one final in the Twenty20 version, losing to England in 2010.

Their squad is packed with big names but skipper Aaron Finch has only just recovered from a knee injury and key batsmen David Warner and Steve Smith have been short of runs in the IPL.

Glenn Maxwell struck a rich vein of form in that competition but Australia have struggled to find a winning T20 unit, losing their last five bilateral series including 4-1 defeats to West Indies and Bangladesh this year.

The absence of Ben Stokes, Jofra Archer and Sam Curran weakens England's chances of following up their 2019 World Cup triumph but they remain serious trophy contenders.

Adil Rashid and Moeen Ali are excellent T20 spinners in a settled, confident side whose last 11 series have yielded nine wins, one draw and a creditable 3-2 defeat in India this year.

The great South African teams of the past gained a reputation for underperforming at major tournaments but their 2021 vintage could exceed low expectations.

They have played a lot of T20 international cricket this year, beating West Indies 3-2, Ireland 3-0 and Sri Lanka 3-0 in their last three series, and opener Quinton de Kock has scored nine fifties in 22 innings since the start of 2019.

The 2012 and 2016 T20 world champions have the highest runscorer in Twenty20 history in Chris Gayle and the leading wicket-taker in Dwayne Bravo, while their captain Kieron Pollard has made more 20-over appearances than any other cricketer.

That wealth of experience, coupled with the destructive batting potential of Evin Lewis, Nicolas Pooran and Shimron Hetmyer, mean the Windies are big runners and they thumped Australia 4-1 earlier this year.

However, that was one of only four victories in 16 series since the start of 2018 and there are doubts over the bowling attack, especially as star all-rounder Andre Russell is short of full fitness.

The Taliban takeover of Afghanistan will have serious consequences for the country's cricketers and Rashid Khan stepped down as captain immediately after the World Cup squad was named.

The brilliant leg-spinner was unhappy that he was not part of the selection process and it is hard to see the underdogs upsetting their powerful rivals in Group Two.

Spinners Rashid, Mujeeb Ur Rahman and Mohammad Nabi pose a serious threat on slow pitches but the Afghan batting is flaky and making them competitive looks a tough job for a leadership group including former England coach Andy Flower.

Considering the country's fervour for Twenty20 cricket, India's results in this tournament have been underwhelming since they won the inaugural World Twenty20 in South Africa in 2007.

Virat Kohli's star-studded squad are hot favourites to put that right in the UAE and it is tough to pick holes in their batting line-up or spin-bowling department while Jasprit Bumrah is one of the great T20 quicks.

However, all-rounder Hardik Pandya has not been fit enough to bowl in the IPL which could upset the balance of the side particularly if conditions are not as spin-friendly as the India selectors anticipated.

The 2019 World Cup runners-up and winners of the inaugural World Test Championship were thumped 5-0 at home by India in early 2020 but have played some good 20-over cricket since then.

The Black Caps are no longer flying under the bookmakers' radar in global tournaments, however, and their 3-2 defeat in Bangladesh was their only away T20 international series in the last two years.

They lost 3-0 to Pakistan in the UAE in November 2018 and their bowling attack is likely to be less formidable than it is in home conditions while there are also doubts over their batting depth.

Security concerns forced the cancellation of Pakistan's home series against New Zealand and England while political tensions mean their players cannot participate in the IPL but despite those setbacks they are a high-class T20 unit.

They have won four of their last five series, and ran England close in the other, and their prolific top three and exciting bowling attack make them serious contenders.

Pakistan also know the conditions better than most of their rivals and they put together an 11-game winning streak in Twenty20 internationals in the UAE between 2016 and 2018.

First round: Group A

Andrew Balbirnie's men were hammered 3-0 by South Africa in the summer before a 3-2 series win over Zimbabwe. They should be competitive in the first round and in-form opener Paul Stirling can get them off to some flying starts.

Former South Africa and Sussex all-rounder David Wiese brings some much-needed experience to the squad but Namibia are up against it in Group A despite warm-up victories against the UAE, Scotland and Papua New Guinea.

The Dutch beat England in the World Twenty20 in 2009 and 2014 and won the qualifying event for this tournament in October 2019. Veterans Ryan ten Doeschate and Roelof van der Merwe still have plenty to offer and batsman Colin Ackermann is a useful addition to the squad.

The 2014 Twenty20 world champions have slumped dramatically in recent years, with poor on-field results and disputes between the board and players off the pitch. The Lankans have lost 16 of their last 19 T20s and two of their three wins came at home to India's reserves.

First round: Group B

The Tigers should make light work of their Group B opponents, having won home series against Australia (4-1) and New Zealand (3-2) this year. Their lack of power hitters may well leave them vulnerable in the Super 12 stage but they should not be underestimated.

Oman beat Ireland at the 2016 tournament and home advantage in Group B means they should fancy their chances of a top-two finish. They were not disgraced in two T20 defeats to Sri Lanka earlier this month before a comprehensive win over Namibia.

Papua New Guinea's previous cricketing claim to fame was as the birthplace of ex-England wicketkeeper Geraint Jones but they had an impressive run to the final of the T20 World Cup qualifying event. This is a big step up although powerful all-rounders Assad Vala and Norman Vanua give PNG a puncher's chance.

Scotland struggled through the qualifying tournament, although they did beat Group B rivals Oman and Papua New Guinea, and expectations are low. Hard-hitting opener George Munsey and Somerset seamer Josh Davey could be players to watch.