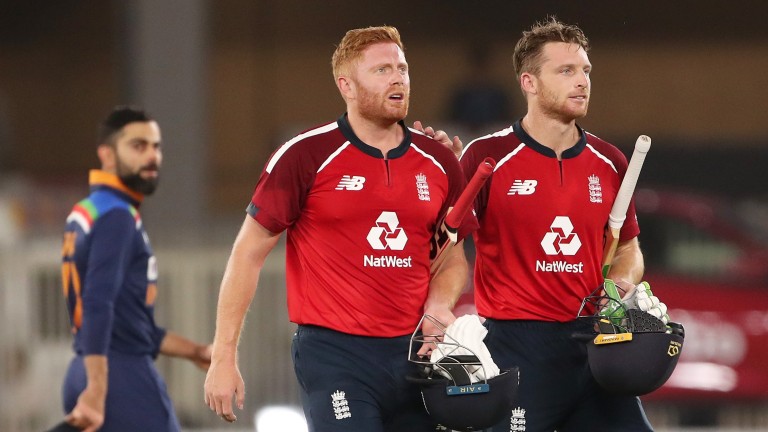 Free cricket tips, best bets and analysis for the T20 World Cup which starts in Oman and the UAE on Sunday.

Live coverage on Sky Sports Cricket from 11am Sunday

First round
There is a round-robin format in Group A (Ireland, Namibia, Sri Lanka and Netherlands) and Group B (Bangladesh, Papua New Guinea, Scotland and Oman) and the top two from each section progress to the Super 12 stage.

Super 12
The 12 teams are split into Group One and Group Two. Each team plays every other nation in their group and the top two advance to the semi-finals.

It is more than five years since the West Indies were crowned Twenty20 world champions in Kolkata, where Carlos Brathwaite hit Ben Stokes for four consecutive sixes in the last over of the final.

Stokes was also at the heart of the action when England won the 50-over World Cup in 2019 but he, along with pace ace Jofra Archer, are sidelined for the T20 World Cup, which was originally scheduled to be held in Australia last year.

India are the team to beat according to bookmakers but the powerhouse of world cricket has not won this tournament since its inaugural running in 2007.

Australia's T20 World Cup record is even less impressive while a vastly experienced West Indies squad will be hoping to repeat their six-laden triumphs of 2012 and 2016.

England would obviously love to have Stokes and Archer, two heroes of their 2019 World Cup victory, but they still have a terrific squad and have drifted to a tempting price.

Stokes's international T20 record is modest – a top score of 47 and just 19 wickets in 34 games – and this is the format in which England miss him least.

Liam Livingstone, who scored England's fastest T20 century against Pakistan in the summer, has forced his way into a batting line-up that includes the brilliant Jason Roy, Jos Buttler and Jonny Bairstow.

Moeen Ali remains a matchwinning T20 all-rounder while Adil Rashid should have a major role to play on spinning pitches in the UAE and Tom Curran and Chris Jordan are experienced death bowlers.

Left-armer Tymal Mills, who was signed on a £1.4m contract by Bangalore in the 2017 Indian Premier League before injuries threatened to end his career, and Mark Wood add some extra pace and zip to the attack.

World Cup-winning captain Eoin Morgan has been short of runs but he led Kolkata to the IPL final in the UAE, knocking out Virat Kohli's Bangalore in the playoffs.

England's only defeat in their last 11 series was March's thrilling 3-2 loss in India, where they led 2-1 and suffered a narrow eight-run reverse in the fourth match.

Kohli's side are understandably favourites given the depth of talent in India but many of their star players have had a gruelling schedule, coming straight from the Test series in England to the IPL.

Kohli may be one of those feeling a little jaded and he has given up the captaincy of Bangalore and will step down as India's T20 skipper at the end of the World Cup, citing his heavy workload.

His side will not be able to ease their way into the tournament as their first two games are against dangerous Group Two rivals Pakistan and New Zealand.

Few teams have enjoyed a smooth build-up to this tournament due to postponed tours, travel restrictions and the rescheduling of this year's IPL but South Africa's preparation has been better than most.

The Proteas are often accused of wilting under the weight of expectation at major tournaments so the fact that they are considered outsiders of the four confirmed runners in Group One may be a positive.

Australia have struggled to get their first 11 on the field in T20 cricket recently so are still searching for the right balance while the Windies are heavily reliant on their power hitters and their bowling attack could be vulnerable.

South Africa beat the T20 world champions 3-2 in the Caribbean in July before thumping Ireland and Sri Lanka 3-0.

They clearly have to raise their game at the World Cup but they have in-form top-order batsmen in Quinton de Kock, Reeza Hendricks and Aiden Markram and a nicely-balanced bowling attack.

Quick bowlers Kagiso Rabada and Anrich Nortje have been excellent for Delhi Capitals in the UAE during the past two IPL seasons and spinner Tabraiz Shamsi is the leading wicket-taker in T20 internationals this year.

Temba Bavuma's men must be more ruthless with the bat towards the end of the innings but they are probably closer in quality to teams such as Pakistan, New Zealand, Australia and the Windies than the betting suggests.