T20 legend Hodge ready to strike out for Adelaide

Perth ace Whiteman is making up for lost time 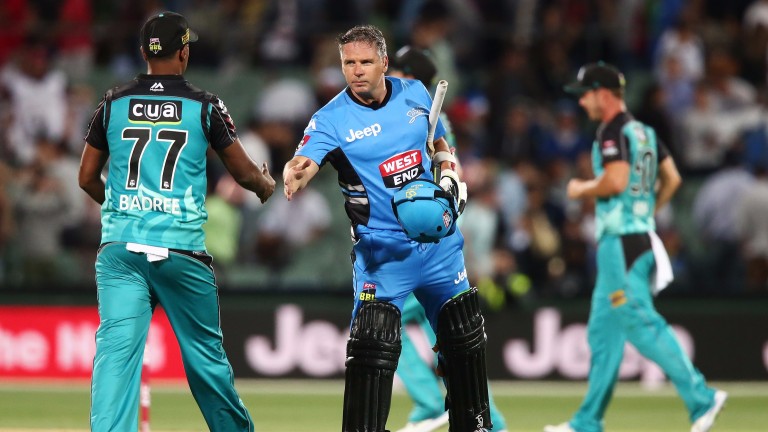 Brad Hodge of the Adelaide Strikers shakes hands with Samuel Badree of the Brisbane Heat after a Big Bash League match
Morne de Klerk
1 of 1
By Max Oram 7:28PM, DEC 22 2016

Brad Hodge looks a value bet to top-score for Adelaide Strikers at Perth Scorchers in the second Big Bash League battle of the day, while Sam Whiteman is worth a speculative outlay to head the home lists too.

Strikers skipper Hodge is the world’s second-highest Twenty20 compiler behind Chris Gayle and while openers Ben Dunk and Jake Weatherald teed off spectacularly in Wednesday’s high-scoring ten-run home loss to Brisbane Heat, the veteran left-hander showed he was in fluent form at number four with a 17-ball 27 not out.

Hodge’s nous and touch could well be needed at the Waca as the Scorchers have been the most successful team in the Big Bash with two titles and two runners-up finishes in the five previous editions and boast a top-notch pace attack partners of Mitchell Johnson, Andrew Tye and England left-armer David Willey.

Keeper-bat Whiteman missed the whole of the last tournament with injury but has been making up for lost time in the Scorchers’ warm-ups with knocks of 73 not out, 50 and 110 not out from a top-order berth.

The Scorchers are slight favourites to prevail in their first outing of the new campaign but the Strikers won both of last season’s meetings and also prevailed in Western Australia two years ago when Hodge top-scored with 42.