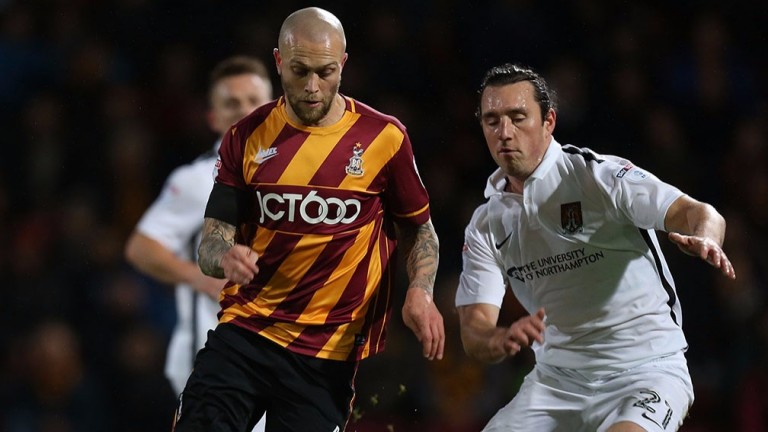 Swindon v Bradford
Consistent Bradford have been in the top four of the Sky Bet League One table since the end of August and their push for promotion should be enhanced by a victory at relegation-threatened Swindon on Saturday.

The Bantams have lost just two league games this season – tying them with leaders Scunthorpe as the joint-toughest teams to beat in the third tier.

Earlier in the campaign they were drawing more games than they would like but that has changed over the last month with Bradford winning three and losing one of their last four league fixtures.

They were dominant 1-0 winners at home to Northampton on Tuesday – winning the shot count 26-9 and the corner count 14-0 – and should be feeling confident when they step on to the pitch this afternoon.

The same cannot be said of Swindon, who appear to be in a bit of a mess with director of football Tim Sherwood picking the team and head coach Luke Williams having to explain to the press why performances and results are not up to scratch.

Williams has said publicly that he appreciates Sherwood’s assistance but seems to have the worst of all worlds – having to shoulder responsibility despite not being able to select his preferred players or formation.

Swindon’s unusual set-up will be judged on results but they are going through a poor spell – following up a 3-1 FA Cup first-round replay loss at home to National League Eastleigh with a 4-0 loss at Rochdale and a 1-1 draw at Southend.

The draw at Southend looks a decent effort on paper but Swindon were battered at Roots Hall (losing the shot count 21-10) and may not be as fortunate this afternoon.

Walsall v Southend
Southend have climbed from the League One relegation zone to within touching distance of the playoffs after a seven-match unbeaten run and look great value at evens draw no bet for victory at 17th-placed Walsall.

Shrimpers boss Phil Brown was coming under massive pressure in the opening two months of the season but kept asking to be judged when more of his key players were available.

And he has been proved right because the return of influential players like centre-back Anton Ferdinand and midfielder Andy Wordsworth has seen Southend transformed from a poor third-tier side to a very competitive one.

They have won their last two away league games and should not be too fearful of the Saddlers, who lost 4-0 at Rochdale on Tuesday.

AFC Wimbledon v Fleetwood
These are heady days for AFC Wimbledon, who are eyeing up a second successive promotion, but their push towards the League One playoffs could be halted by Fleetwood today.

The Dons scored ten goals over the course of their last two home games but on both occasions they were up against struggling Bury, who succumbed 5-0 in the FA Cup and 5-1 in the league.

Fleetwood, on a three-match winning sequence, will offer much stiffer resistance and are as strong as they have been for some time with winger Jimmy Ryan free from injury and striker Chris Long available after a ban.

Ryan and Long will improve Fleetwood’s attacking options and there may be a vulnerability to the home side’s defence with first choice right-back Barry Fuller and left-back Jonathan Meades serving suspensions.

Wombles’ manager Neil Ardley admits that his team will have to be “patched up” and punters should take advantage by backing Fleetwood not to lose.

Crawley v Grimsby
Crawley were shaping up as surprise Sky Bet League Two playoff hopefuls a month ago but have slipped to sixth-bottom after three successive league defeats and face further disappointment at home to Grimsby.

There were understandable concerns among Grimsby fans when manager Paul Hurst left to join Shrewsbury last month but his replacement, Paul Bignot, is going a great job.

Bignot is yet to lose a league game as Grimsby manager and steered his side to a memorable 3-0 win at leaders Plymouth last weekend.

If they get close to that standard of performance, Grimsby will be good things at 6-5 to beat Crawley.