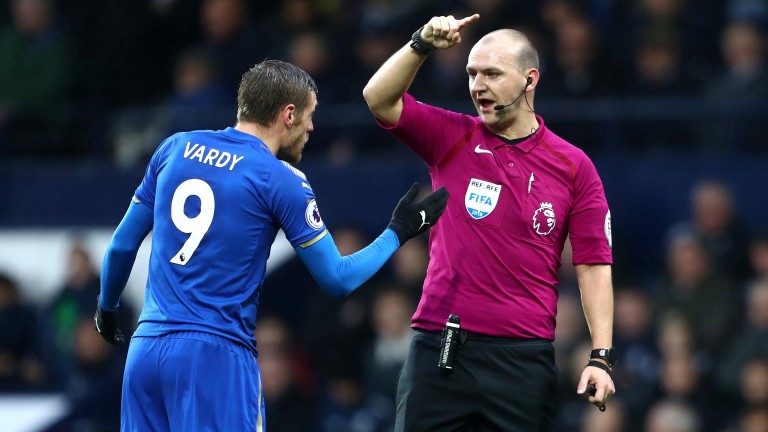 Today should be special for the Madley brothers. Bobby and Andy will both referee in the Premier League.

Andy will control a top-tier game for the first time when he blows his whistle at Vicarage Road to start Watford v Bournemouth. He deserves the chance.

Bobby goes to Old Trafford for Manchester United v Swansea. We can trust him to officiate there to the same high standard he has produced in the Premier League for nearly five years.

If Bobby has to show cards, however, he may not have to show as many to Swansea players as bet365 anticipate. Back Manchester United +1 Asian handicap cards at decimal odds of 2.0 – equivalent to evens in fractional odds.

The reasoning behind this recommendation has nothing to do with the behaviour of United or Swansea players, who are all committed but fair. It is simply that historically in this sort of game the home team have received at least as many cards as the away team more often than bet365’s odds seem to suggest.

In result-related markets United are strong favourites to score most goals and beat Swansea. They imply about an 80 per cent chance of United scoring each goal that is scored, rightly in my view.

United’s results this season would have put them in a good position to win the title in many previous seasons. They are a distant second in the table only because Manchester City have produced what may have been the most effective football ever played in the Premier League.

Swansea are 14th. Whatever happens in this game they will still be above the relegation line afterwards. When Carlos Carvalhal was appointed manager in December they were bottom.

So that group of games was similar in character to the match it seems reasonable to anticipate this time.

Backers of United +1 Asian handicap cards would have won 102 times, got their stake back 45 times and lost 53 times. If they could have backed United each time at evens they would have more money now than they did then.

Thought for the Day

Odds should be explained in schools. Betting gets a bad press, and a lot of it is deserved. But gambling well requires skills that are useful elsewhere in life, and foremost among those is an ability to work out and weigh odds.

As I was reminded last week.

My wife and I took time off to spend with visitors from Germany. They are a couple with children of three and five. The little ones needed children’s car seats. We could not fit them and four adults in our car. So I hired a people carrier.

When I picked it up I was told I was liable for the first £1,000 of any damage. I could reduce my liability to £250, I was told, by paying a premium of £150. Because of what I had learned from betting I knew this was an outrageously bad offer.

I could have paid £150 for the possibility of saving £750. My potential saving would have been just five times my non-returnable premium. The offer would have represented value for money to me only if the chance that I would cause £1,000 of damage in one week was greater than one in five, or 20 per cent.

Put that another way. The offer would have represented value for money to me only if I am likely to have an accident causing at least £1,000 of damage more than once every five weeks – that is, more than ten times a year.

You would have recognised this instantly as a ridiculously bad deal. So should everyone else who reads the Racing Post. But most people do not read the Racing Post, and many of them would not be able to do the sums that seem elementary to us. Odds should be explained in schools.