Surrey should keep up Championship charge at Yorkshire 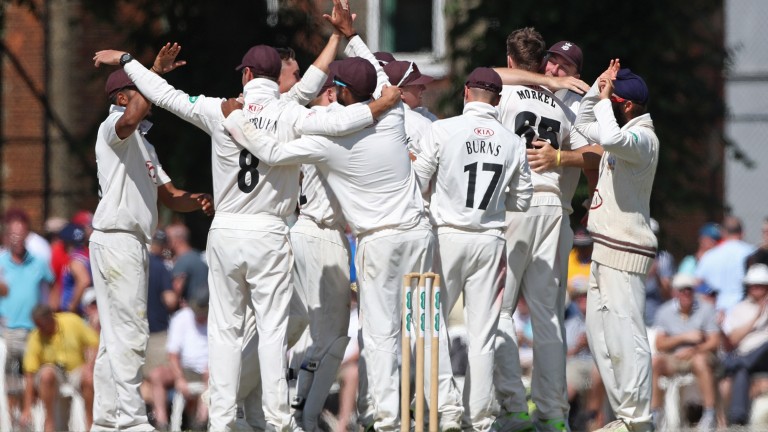 Surrey players celebrate their success over Somerset at Guildford
Getty Images
1 of 1
By Max Oram UPDATED 11:17AM, JUN 25 2018

Division One and Two matches
From 11am Monday

Surrey have stormed to the top of County Championship Division One with three straight innings successes and they should be backed to continue their push for the pennant with victory over Yorkshire at Scarborough.

Stakes are returned if it is a draw at the North Marine Ground and the unbeaten Oval men began their run of big wins with a Kennington success over their hosts before the break for the One-Day Cup group stages.

Last week, at their second home in Guildford, they defied all their England and England Lions call-ups to dispatch then nearest challengers Somerset and they crushed Hampshire at the Rose Bowl a fortnight ago.

Yorkshire lost to the Cidermen by 188 runs in April and their floodlit fixture at Southampton last week rarely threatened to be anything other than a drab draw.

The White Rose county are never written off lightly, however big their absentee list, but scoring first-innings runs has been something of an issue this summer and they have claimed only seven batting bonus points.

Somerset and Essex both won easily at Scarborough last season and Middlesex won there by an innings and four runs in 2016 after their hosts subsided to 167 all out in their second innings after making 406 in the first.

In Division Two, second-placed Kent can keep up the pressure on leaders Warwickshire with a win over Middlesex at Canterbury.

The Spitfires stayed strong to inflict a first loss on the table-topping Bears in a bizarre Tunbridge Wells battle last week and while Middlesex won by one wicket at Leicester, they were the inferior side for much of the match.