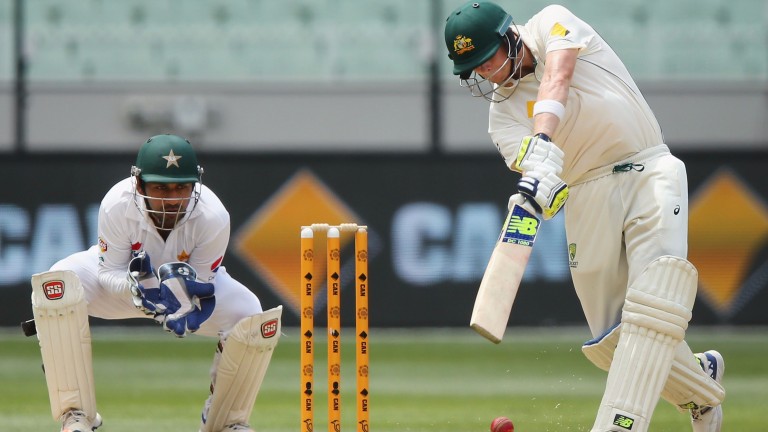 Pakistan won’t want reminding of the last time they played a Test in Sydney after they collapsed in a final session last week for the second time in a month to lose the Boxing Day Test and the series spoils to Australia. In 2010 at the SCG, Pakistan were skittled for 139 chasing 176 after taking a 206-run lead in the first innings.

And 4-9 about the hosts prevailing 3-0 looks fair even though Misbah-ul-Haq’s men – if Misbah has not carried out a post-MCG threat to retire – have proved a mercurial bunch in recent times and threatened to steal the opener in Brisbane.

Showers are forecast for the first three days and the last two Sydney Tests have been draws.

Australia skipper and number four Steve Smith to score a first-innings century is the bet.

Baggy Greens opener David Warner, who walloped a run-a-ball 144 at the MCG, has smacked tons in his last two SCG first innings and is tempting to reach three figures but the weather forecast in conjunction with Pakistan’s quality swing bowlers deters.

Man of the moment Neil Broom is worth backing at 4-1 to top-score for New Zealand in their first T20 against Bangladesh in Napier.

Broom responded to his shock ODI recall with scores of 22, 109 and 97 against the Tigers and while he is set to be a replacement opener for the injured Martin Guptill, he has hit 206 runs in the current domestic T20 competition at a strike-rate of 140.

Have a wager on 15 or more sixes in the Big Bash battle in Brisbane between the Heat and Sydney Sixers.

There were 17 maximums at the Gabba on Friday and the Heat’s batsmen – most especially Chris Lynn – are the reason they are three from three. The inconsistent Sixers have plenty of sluggers too.