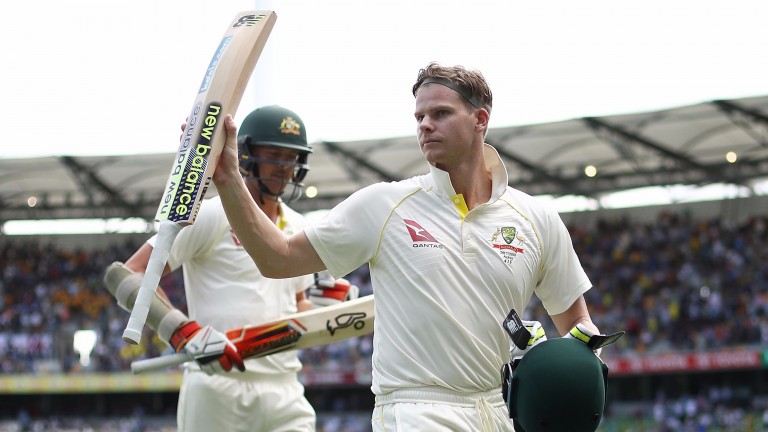 England's failure to finish off the Australia tail cost them dear in their 5-0 Ashes defeat four years ago and the 2017-18 series has started in similar fashion thanks to a brilliant century from Steve Smith.

The Aussie skipper's unbeaten 141 hauled his side from 209-7 to 328 all out in response to England's 302 and the hosts ended day three in Brisbane as 2-5 favourites for the Test.

Smith, 9-4 to score Australia's first century of the series, mastered a tricky Gabba pitch and his heroics were backed up by some high-class spells from the home bowlers when England batted again.

It leaves England in a precarious position at 33-2, seven runs ahead with eight second-innings wickets remaining, and Australia will be looking forward to another crack at the tourists with a relatively new ball on Sunday morning.

Australia had drifted to 5-4 for the match in-play (and 4-6 for the series) before Smith, ably supported by Cummins (42), steered them to a valuable first-innings lead.

Bookmakers expect the Aussies to be chasing around 200 in the fourth innings of the match - England's second-innings runs line is 229.5 with Hills and 236.5 with Sky Bet - and Root has a crucial role to play after the loss of experienced opener Cook and Vince, their top runscorer in the first innings.

Bet365 go 10-11 that the captain, who will resume on five not out, makes 34 or more runs in the second innings and that looks worth a small bet.

It will not be easy given the quality of Australia's bowling in the final session but that is certainly factored into the bet365 line and Root's last nine Test second-innings scores include four fifties and a 49.