Super Sharma should shine for India 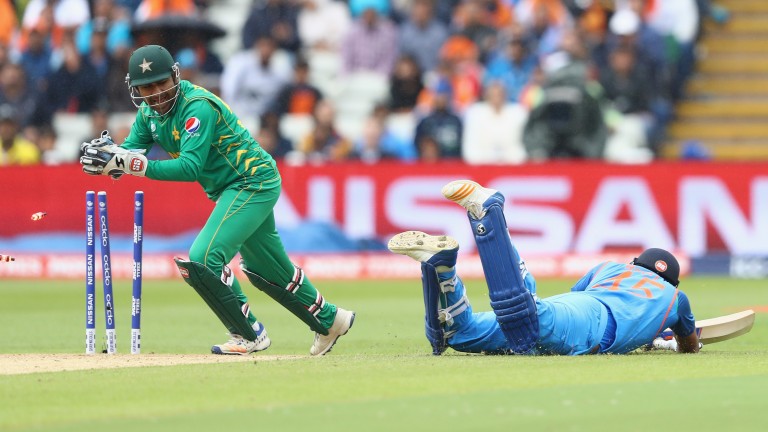 Rohit Sharma was run out for 91 against Pakistan but the India man looked in good form
Michael Steele
1 of 1
By James Milton 8:00PM, JUN 7 2017

Champions Trophy
Sky Sports 2, 10.30am Thursday
India made an impressive start to their Champions Trophy defence, thumping Pakistan at Edgbaston, and bookmakers expect more of the same when they face Sri Lanka at The Oval, making Virat Kohli’s men 1-4 favourites for the Group B clash.

The teams met in Cardiff in this tournament four years ago, with India easing to an eight-wicket victory, and they have won seven of their nine subsequent ODIs against the Lankans.

India demonstrated their all-round quality against Pakistan with their top four all making eye-catching half-centuries and number five Hardik Pandya coming in to bash three sixes from the six balls he faced.

Their bowlers never allowed Pakistan to get going in their run-chase and Ravindra Jadeja epitomised their sharp fielding with an excellent direct hit to run out Shoaib Malik.

Sri Lanka were short of ODI confidence coming into this tournament, having lost 5-0 in South Africa and been held to a 1-1 draw at home to Bangladesh.

Their 96-run defeat to the Proteas at The Oval featured another disappointing batting display.

Angelo Mathews returns to lead the side against India but odds of 3-1 against the outsiders reflect the scale of the task.

Best bet
India played some thrilling cricket in their defeat of Pakistan so expectations are high as the holders take on another of their Asian neighbours.

If South Africa beat Pakistan on Wednesday night then a no result would spell the end of Sri Lanka’s chances of reaching the semis and their capitulation at The Oval last weekend won’t fill their fans with great confidence.

The Lankans were punished by South Africa’s Hashim Amla, who scored 103 in Saturday’s game, and India have some similarly classy openers in the form of Shikhar Dhawan and Rohit Sharma.

Kohli is the obvious 5-2 favourite to be India’s top runscorer – the skipper batted as beautifully as ever for his unbeaten 81 against Pakistan – but Sharma looked set for a deserved century at Edgbaston before being run out in unlucky circumstances for 91.

He survived a testing opening spell from Mohammad Amir and appears to be back in the groove after a long injury layoff.

Sharma led Mumbai Indians to the IPL title and he has become one of the top 50-over batsmen in the world since his promotion to open the batting in 2013.

His record as opener is superb – in 69 innings at the top of the order he has scored 18 fifties and eight centuries, including 209 against Australia and a record 264 against today’s opponents.

Sri Lanka struggled to make early inroads against South Africa at The Oval – the Proteas cruised to 189-1 before a late wobble and the Lankans needed a run-out to get rid of Amla.

Sharma made 52 against the West Indies in his only ODI at The Oval and he should relish the venue’s true pitch.

Venue
Bangladesh and South Africa both looked primed for massive totals at The Oval but England and Sri Lanka’s bowlers ended the innings well, restricting them to 305-6 and 299-6.

Bangladesh also collapsed from 122-3 to 182 all out in the rain-ruined game against Australia – opener Tamim Iqbal top-scored for the second game in a row – but the surfaces are generally good for batting.

Team news
India are likely to stick with the 11 who performed so well against Pakistan but Ravichandran Ashwin could come in as a second spinner.

Sri Lanka skipper Mathews returns from a calf injury but he may not fit enough to bowl. Vice-captain Upul Tharanga starts a two-game ban for a slow over-rate so Kusal Perera may open the batting but Chamara Kapugedara is a doubt.

Weather
The forecast for London is overcast, clearing as the afternoon goes on, and rain interruptions shouldn’t be a problem. Highs of 18C.