Super Saints can march on in bid for Wembley double

Arsenal could be stunned at St Mary's 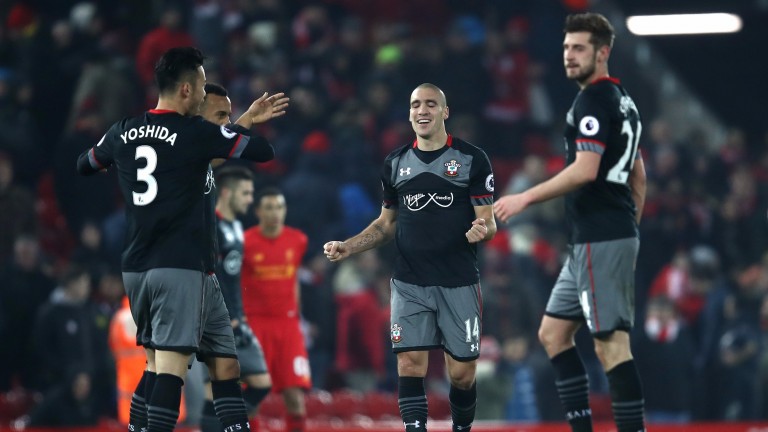 Southampton's players celebrate their win at Liverpool in the EFL Cup
Julian Finney
1 of 1
By Mark Langdon 7:27PM, JAN 27 2017

Southampton are already Wembley-bound after reaching the EFL Cup final and they can march on in the FA Cup by stunning Arsenal at St Mary's.

Much will depend on the fitness of Claude Puel's squad and whether they can stay focused on the FA Cup but at the prices it is worth taking a chance that Southampton are serious about winning the most tasty tie in the fourth-round draw.

Saints overcame the absence of star man Virgil van Dijk to beat Liverpool 1-0 on Wednesday, progressing 2-0 on aggregate, and Puel remains without a stack of players but he will presumably be keen to get one over his former Monaco manager Arsene Wenger.

Tuesday's Premier League trip to Swansea is not a huge deal given Saints are safely tucked away in 11th spot so they should be able to give the match their full attention and if that is the case this could well be a tricky 90 minutes for Arsenal.

Not that the Gunners faithful will expect anything less from a trip that has traditionally been unsuccessful for their side. The Londoners are without a win in five at Southampton and were thumped 4-0 there last season.

Southampton have lost three times at home this season and on two of those occasions (Tottenham and West Brom) they were reduced to ten men. Leaders Chelsea were the only other team to win at St Mary's.

Liverpool came unstuck at the venue earlier this month and Saints' makeshift centre-back pairing of Maya Yoshida and Jack Stephens defended heroically at Anfield on Wednesday.

There is a nice balance to the midfield that keeps them both solid defensively but also dangerous on the counter-attack with last week's 3-0 stroll over Leicester highlighting the quality in the squad.

Jay Rodriguez and Charlie Austin are among the forward-thinking players unavailable but Nathan Redmond, Shane Long and Dusan Tadic will still provide the hosts with a scoring threat.

It remains to be seen how seriously Wenger takes this tie with a busy Premier League calendar on the horizon - Watford visit the Emirates on Tuesday before the trip to Chelsea next Saturday.

Arsenal needed late efforts to see off West Brom, Preston and Burnley by single-goal margins, while they scored four goals from eight attempts at Swansea in a match where Arsenal were under the cosh before Olivier Giroud's opener.

The Gunners have lost two of their last five away games and it should have been three considering they found themselves 3-0 down at Bournemouth with 20 minutes remaining.

If they are similarly sloppy on their return to the south coast there may be no way back for Wenger's men.

Arsenal
Theo Walcott, Per Mertesacker and Mathieu Debuchy are back in full training, but Santi Cazorla remains sidelined. Granit Xhaka is suspended and Mohamed Elneny is at the Africa Cup of Nations.