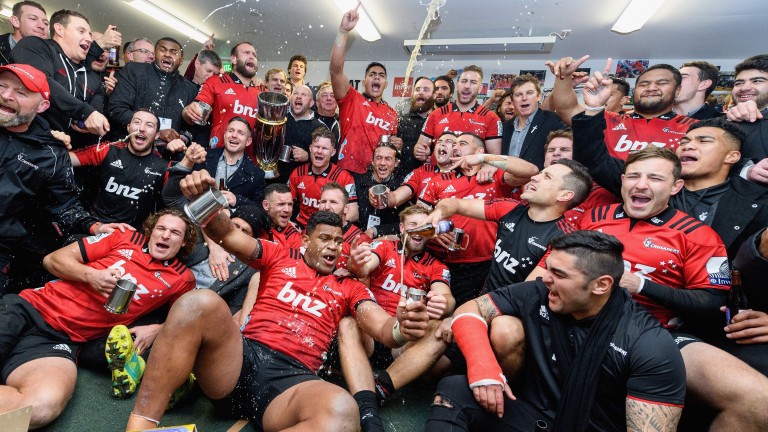 There will be more eyes than usual on this year’s Super Rugby showdown as all the southern hemisphere’s stars are on show in Rugby World Cup year.

The All Blacks are resting many of their big names for the first few rounds, but the New Zealand franchises have dominated in recent seasons and they look set to take all the beating again.

The knockout stages have been brought forward to June, with the final on July 6, because of the World Cup in October.

New Zealand Conference
Two-time defending champions the Crusaders are the team to beat under coach Scott Robertson, who must be at the front of the queue should the All Blacks job become available after the World Cup.

The Canterbury outfit won 14 of their 16 regular-season matches last year - three more than their nearest challengers - with a whopping +247 points difference. And even with All Blacks captain Kieran Read and teammate Sam Whitelock given an enforced rest for the first four weeks, Robertson has 15 players with international caps at his disposal for the season-opener against the Blues.

The Crusaders are 11-10 to top their conference and 11-4 favourites for a hat-trick of titles.

Next in the betting are 2016 champions the Wellington Hurricanes, beaten semi-finalists in the last two years, who retain a strong squad despite losing Brad Shields and Julian Savea.

John Plumtree takes over as coach after Chris Boyd’s departure for Northampton and despite their talented backline, marshalled by All Blacks TJ Perenara and Beauden Barrett, they may lack the forward power to contend.

The Otago Highlanders have also suffered a big loss to the northern hemisphere in the shape of fly-half Lima Sopoaga and a playmaker of that class leaves a big hole to fill. Bryn Gatland, son of Wales and Lions coach Warren, is among the names lining up to do that, but Sopoaga’s departure and a shaky defence in 2018 count against them.

Similarly the Waikato Chiefs have shown flashes of brilliance, including winning six of their first seven games last year, but they lack dominance and consistency. They lost out to the Canes in the quarters last year by a single point.

New Zealand’s also-rans are the Auckland Blues, who haven’t reached the knockout stages for seven seasons. Leon McDonald has taken over from Tana Umaga as head coach after a disappointing four-win season.

Australian Conference
The New South Wales Waratahs’ title triumph in 2013 was the last time an Australia team made the Super Rugby final. The Tahs were also the only team to reach the knockout stage last season and their attacking resources, boosted by the capture of Wallaby centre Adam Ashley-Cooper, should make them competitive again.

The playmaking skills of Bernard Foley and Kurtley Beale plus the finishing of Israel Folau make them worth watching and they are 7-4 favourites to finish of of the pile.

The ACT Brumbies, Australia’s highest finishers in 2017, are their nearest challengers but they still look a limited outfit and their failure to add a solid fly-half is a concern.

The addition of Quade Cooper makes the Melbourne Rebels, who were probably the most progressive team last year, an interesting proposition. They missed out on the knockout stage by a whisker and their five try-bonus points was more than any other Australian team. With Cooper there to add more flair to their attack, they look worth backing to come out on top.

The Queensland Reds were a distance behind the other Australian side and they don’t look to have bolstered their young squad enough, while the Sunwolves finished stone last in 2018 with just three wins.

South African Conference
Three-time beaten finalists the Lions are odds-on to top the section again and it’s hard to see them falling short. This conference undoubtedly offers an easier route to the knockout stages - the Lions played just five games outside South Africa last season, and in 2017 they didn’t face any New Zealand opponents in the regular season.

It’s a tougher ride this time, with away trips to the Crusaders, Chiefs and Brumbies, but playing home matches at altitude in Johannesburg is always a big plus.

The Sharks and Jaguares made the quarter-finals last year but haven’t shown the consistency to suggest they can be regular contenders.

The Stormers have a pack rich in international experience but that isn’t matched in their backline, who finished bottom of the tryscoring charts, while the Bulls have a new coach following John Mitchell’s move into the England set-up and although they have tried to add some experienced players to their squad, including former Saracen Schalk Brits, they still look as if they lack depth.

It’s hard to see anyone challenging the favourites, but at 8-15 the Lions are no sort of a price.