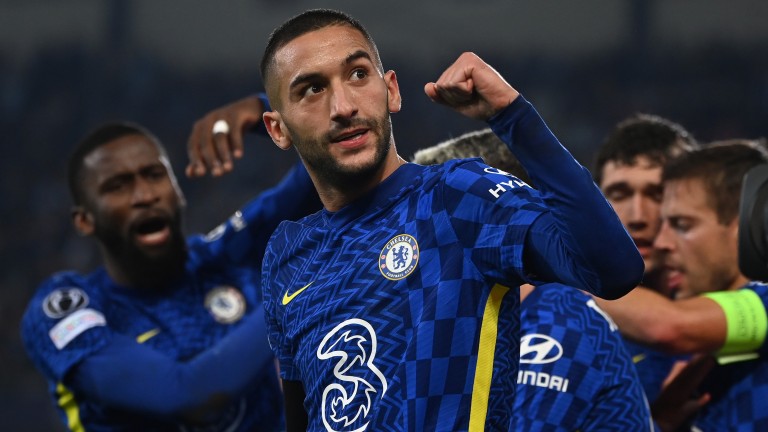 Sky Bet's Super 6 competition features six matches from the Premier League and Championship on Saturday and a £250,000 prize is up for grabs in the free-to-play game.

Below, Racing Post expert James Milton assesses the action with predictions on all six of the matches.

Chelsea ground out a 1-0 Champions League win at Malmo on Tuesday night and another trademark victory to nil is on the cards when Thomas Tuchel's men host Burnley in the Premier League.

Chelsea have kept a clean sheet in seven of their eight league wins this term and four of those victories, including last weekend's success at Newcastle, were by a 3-0 margin.

Patrick Vieira and Bruno Lage have made positive starts to their careers at Crystal Palace and Wolves, both adding more attacking zest to teams who scored just 77 goals in 76 league games between them last term.

Palace drew 2-2 at Arsenal last month and a repeat of that scoreline is possible given that both teams have scored in Wolves's last four games and the Eagles notched twice in a shock win at Manchester City last month.

Norwich have failed to score in their first five away matches in the Premier League this season and the Canaries may struggle to land a blow on fellow promoted club Brentford.

The Bees have been competitive at home this season, beating Arsenal, drawing with Liverpool and losing narrowly to Brighton, Chelsea and Leicester, and they can edge a low-scoring contest on Saturday.

West Brom's home form is keeping them in touch with Bournemouth and Fulham at the top of the Championship and the Baggies, who have lost their last three on the road, should claim a fifth straight league win at The Hawthorns.

Their last three home wins have all been to nil and they can see off a Middlesbrough side who have already suffered three 2-0 defeats this season.

Bournemouth's unbeaten start to the Championship campaign ended with a 2-1 home defeat to Preston on Wednesday and the Cherries may have to settle for a point against in-form Swansea.

Both teams have plenty of attacking quality – there have been goals at both ends in six of Bournemouth's eight home matches while the Swans have scored in seven of their eight road fixtures this term.

Unsurprisingly, the Cottagers have won all five of those games, keeping clean sheets in four of them, and they should extend that fine run at Peterborough, who have had three 3-0 losses this season.

Win £250,000 in this free to play game. Predict six correct scores to win the jackpot. Entries need to be in by 3pm on Saturday - over £10 million has been won so far!