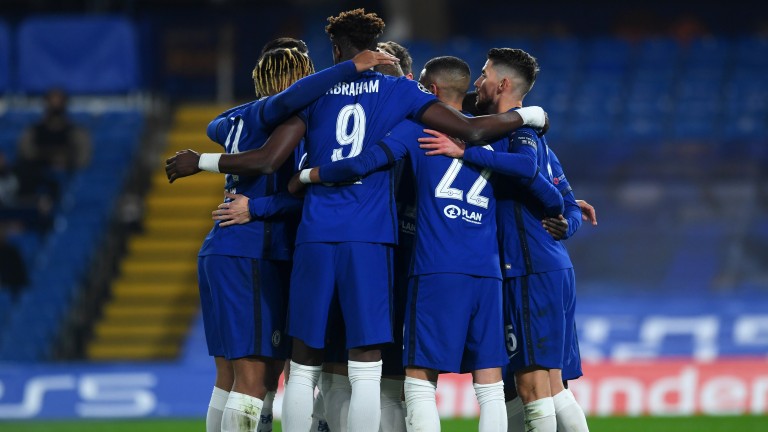 Chelsea should be celebrating victory over London rivals Palace
Pool
1 of 1
By Joe Casey 4:30PM, AUG 9 2021

Sky Bet's Super 6 competition is back for the new season, featuring six matches, with a £250,000 prize up for grabs in the free-to-play game.

Below, Racing Post expert Joe Casey assesses the action with predictions on all six of the matches.

Click here to back all our match predictions with Sky Bet, the six-fold pays over 130-1

Chelsea have won their last seven Premier League games against Crystal Palace and it's hard to see that trend changing here. Palace are a team in transition and will need time to gel, so back Chelsea to get the job done with comfortable 2-0 win.

This will be a tight affair and there may be a lack of goals on Merseyside. Everton are unbeaten in their last nine home games against Southampton, but may struggle to find the net with star man Dominic Calvert-Lewin being eased back after his exertions at Euro 2020. A bore draw is the selection.

Both teams have found the net in four of the last five ties between these two sides but Burnley's home record and failure to improve their squad over the summer makes Brighton the more likely victors. Sean Dyche's side have gone ten league games without success, which points to a Brighton victory.

Both teams have scored in Leicester's last six Premier League games, but their attacking prowess should be enough to see them prevail against Wolves. The Foxes face a side that will be adjusting to life under new manager Bruno Lage and look like taking full advantage.

After a tumultuous summer, Aston Villa head to Vicarage Road for their Premier League opener. Nine of Villa's last ten league matches have seen over 2.5 goals and they should be able to rack up the goals against a Watford team that may prove out of their depth at this level.

Luton have drawn three of their last six league games and after a good 3-0 win against Peterborough on the opening day of the season, the Hatters can frustrate West Brom. Valerian Ismael's Baggies are still a few players short of their best XI and a draw could be on the cards in this one.

FIRST PUBLISHED 4:30PM, AUG 9 2021
Palace are a team in transition and will need time to gel