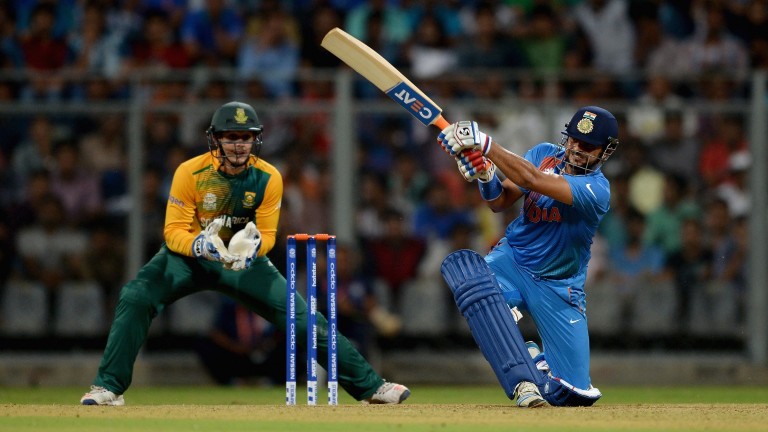 India batsman Suresh Raina could star for Chennai in the IPL final
Gareth Copley
1 of 1
By James Milton 8:00PM, MAY 26 2018

The IPL playoff campaign has taken Hyderabad from one side of India to the other and back again this week and they find themselves back where they started - bidding to beat Chennai in Mumbai.

The top two in the regular season met in the first qualifier on Tuesday, when Chennai hauled themselves from the depths of 62-6 to reach their target of 140 with two wickets to spare.

That result sent the Super Kings straight into the final while Hyderabad headed to West Bengal for a second qualifier against Kolkata Knight Riders in front of a hostile crowd at Eden Gardens.

The youngster smashed 34 off ten balls to set a demanding target before claiming 3-19, two catches and a run out, leaving the man-of-the-match adjudicator with one of the easiest decisions of the season.

Rashid's spin partnership with Bangladesh star Shakib Al Hasan has helped Hyderabad defend some modest totals this term, not least when they bowled out Mumbai for 87 at the Wankhede Stadium.

Seamers Bhuvneshwar Kumar and Siddarth Kaul have performed superbly too and the batting looks stronger with Rashid and Carlos Brathwaite, who top-scored with 43 off 29 balls in the qualifier against Chennai, lurking down the order.

Chennai did the double over Hyderabad in the regular season and they have had a four-day break since booking their place in the final.

But Hyderabad's win in Kolkata felt like a major breakthrough, a testament to the character in the squad and the calm leadership of Williamson, and Chennai so nearly made a mess of the first meeting between the sides this week.

They needed an unbeaten 67 from Faf du Plessis to drag them to victory on Tuesday but number three Suresh Raina looks the man to support in the top Chennai runscorer market.

The experienced India left-hander hasn't had a spectacular IPL by his own high standards but he finished the regular season with an unbeaten 61 in a trappy run-chase against Kings XI Punjab and cracked four boundaries in a 13-ball 22 against Hyderabad on Tuesday.

Raina has passed 50 in three of his last nine innings and should relish the pressure of yet another final – Chennai's seventh in nine attempts – in front of a packed crowd at the Wankhede.