Goals could flow when the Dees travel to Celtic Park 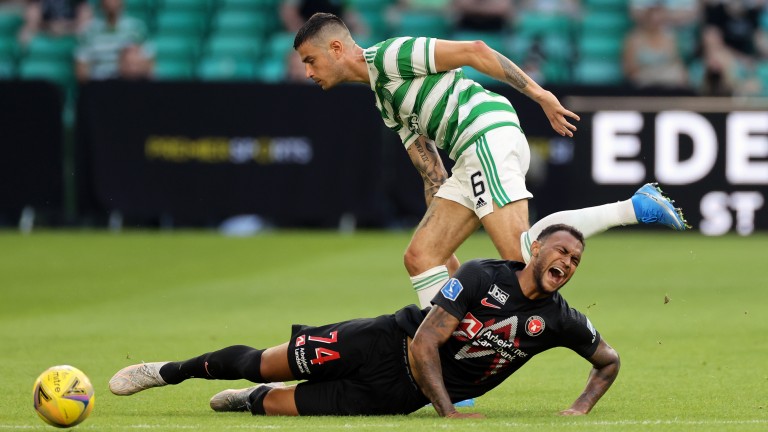 Nir Bitton doesn't convince at the heart of the Celtic defence
Steve Welsh
1 of 1
By Henry Hardwicke UPDATED 12:53PM, AUG 9 2021

There are four Scottish Premiership matches to ponder on Sunday and no puzzle looks more difficult to solve than Celtic.

The Bhoys were dumped out of the Champions League and then went on to lose 2-1 to Hearts on the opening day of the season last week.

Ange Postecoglou was forced to field an inexperienced defence against Midtjylland, but a back four of Nir Bitton, Greg Taylor, Carl Starfelt and Anthony Ralston still shipped two goals against lowly Jablonec in the Europa League on Thursday.

Celtic have had only three days to recover from that trip to the Czech Republic and they don’t have the defensive numbers to change things up.

There’s no doubt the Bhoys will improve as the season progresses and Joe Hart should offer more resistance in goal than Scott Bain or Vasilios Barkas, but at this moment Dundee look to have an excellent chance of at least finding the net.

The Dees kicked-off their campaign with a good 2-2 draw against St Mirren, overcoming Max Anderson's red card to take a point.

James McPake’s side like to go on the front foot and they scored 14 goals in their four League Cup group-stage matches. Clearly, this is a step up in class, but a goal doesn’t look an insurmountable task for Dundee.

St Johnstone were up to their old tricks of dominating the game but failing to win against Ross County on the opening day. However, they look to have a strong chance against a leaky Motherwell defence.

The Well shipped 55 goals in 38 league games last term and they conceded three at Fir Park against Hibs last week.

At 21-20, the Saints looks a solid bet to record their first Premiership victory of the season.