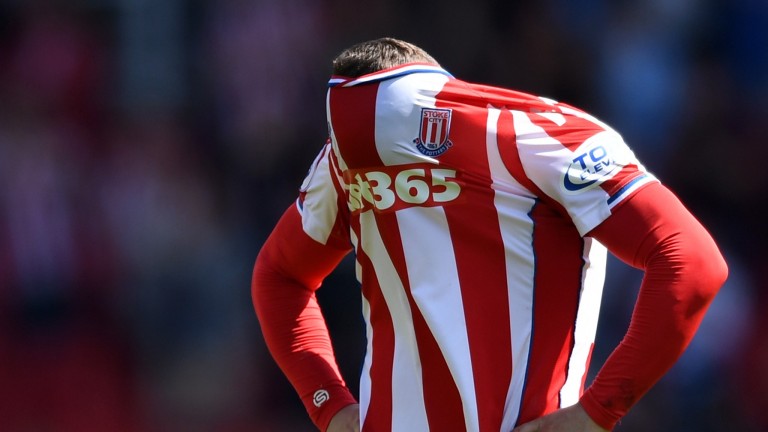 Stoke’s ten-year spell in the Premier League has come to an end after the Potters, 7-1 shots in the ante-post relegation market, lost 2-1 at home to Crystal Palace.

Patrick van Aanholt’s late winner for Palace sealed Stoke’s relegation but West Brom kept alive their slender chances of survival thanks to an injury-time winner from Jake Livermore against Tottenham.

The Baggies had been 8-1 to beat Spurs, but they were seconds away from relegation until Everton’s last-gasp equaliser against Southampton.

Saints had looked set for a colossal win thanks to Nathan Redmond’s goal but Everton piled on the pressure after Maya Yoshida’s late red card and Tom Davies made it 1-1 with virtually the last kick of the game.

The point took the Saints out of the relegation zone as they moved above Swansea, who lost 1-0 at Bournemouth, on goal difference. Hills make Swansea and Southampton 7-4 for the drop while Huddersfield are 6-4.

Spurs remain five points clear of fifth-placed Chelsea having played a game more. The Blues are 7-1 for a top-four finish with Tottenham 1-33 and Liverpool, who travel to Stamford Bridge on Sunday, 1-25.

Wigan clinched the Sky Bet League One title after a 1-0 win at Doncaster, with Blackburn finishing second, and Shrewsbury, Rotherham, Scunthorpe and Charlton will contest the playoffs.

Rochdale’s win over Charlton means Oldham, Northampton, MK Dons and Bury have been relegated from League One.

In Sky Bet League Two, Barnet were relegated despite beating bottom club Chesterfield 3-0 as Morecambe picked up the point they needed for safety with a 0-0 draw at Coventry.

That result was also enough to see the Sky Blues into the playoffs and the mutually beneficial draw had been backed into 7-5.

Coventry will face Notts County in the playoff semi-finals with fourth-placed Exeter taking on Lincoln, who pipped Mansfield for the final spot.

Lincoln and Mansfield went off at 8-15 but were held to 1-1 draws at home to Yeovil and Crawley, leaving the Imps in seventh place.
Sky Bet make Coventry and Lincoln 9-4 joint-favourites for promotion with Exeter 3-1 and Notts County 7-2.