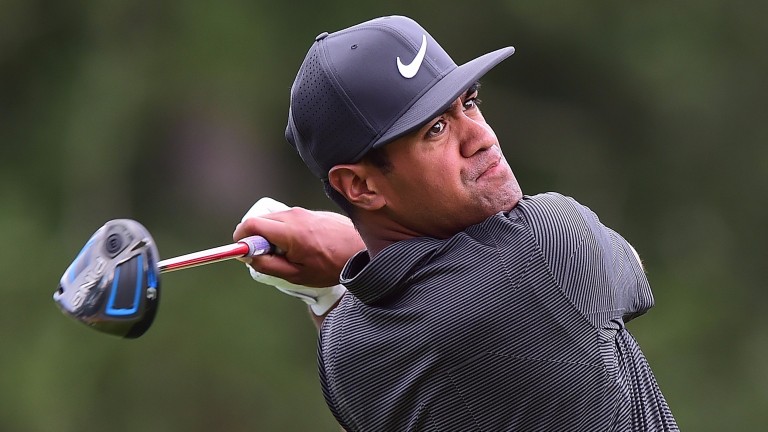 Justin Thomas hit the front in the second round of the Zozo Championship, the former US PGA and FedEx Cup champion firing a Friday 65 to reach 14 under par, one shot better than anyone else could manage over 36 holes at Sherwood Country Club.

The old World Challenge venue is playing much easier than it did for that tournament, with the greens made flatter in 2016, and the PGA Tour's finest have been ripping it to shreds. Seventy of the 78-runner field are under par.

Thomas, a 12-1 chance ante-post, is no bigger than 5-2 going into the weekend and it is 12-1 bar him, with Patrick Cantlay, two shots behind, who bookmakers judge as the main threat.

Jon Rahm is five shots behind Thomas, tied for 22nd place, and will still have high hopes of contending, but other big names seem completely out of it, with Rory McIlroy (ten behind), Xander Schauffele (11) and Tiger Woods (12) giving themselves a weekend mountain to climb.

Justin Thomas looked in ominous form for most of Friday and his typically stellar iron-play is a great match for Sherwood Country Club. Tiger Woods won five times at Sherwood thanks largely to his approach-shot ability - and Thomas is similarly adept at hitting laserlike approaches.

That said, there was encouragement for Thomas's pursuers over the closing holes of round two. The 13-time PGA Tour champion lost his swing and was wayward coming home. Magnificent scrambling meant he still closed with six consecutive pars, but Thomas had a chance to put some daylight between himself and the rest, and failed to do so.

It is understandable that bookmakers have chalked Thomas up so short. The arguments which made him a selection for the CJ Cup last week still stand for the Zozo - he has a remarkable record of success in limited-field events like these and nobody has been a more successful PGA Tour performer in the autumn over the last five years.

Punters who stuck with Thomas for the Zozo at 12-1 should be giving themselves a pat on the back, but there is no urge to get aboard at 5-2. With such low scoring at Sherwood and no significant breeze forecast for the weekend, it seems obvious that one or two of the chasing pack are going to make the leader work for victory.

Bubba Watson (22-1) and Jon Rahm (33-1) are the most attractive outright options at this stage. Both powerhouses are in good enough form to make merry on the five par-fives at Sherwood and deliver a Saturday round in the low-60s to challenge Thomas.

Third-round threeball punters are pointed towards Tony Finau for the 7.37pm (UK and Ireland time) contest. Patrick Reed and Kevin Kisner would both have groaned when they saw the Saturday draw - they reportedly hate each other. Kisner has been extremely outspoken in his criticism of Reed in the past. With tension seemingly inevitable between those two, perhaps resulting in a poorer performance, the ever popular Finau can focus better and boss the group.

Finau, clearly feeling no ill-effects in the wake of his positive Covid-19 test at the Shriners Open, has the tools to destroy the five par-fives at Sherwood. He has not competed since the US Open and is fresher than his threeball partners going into the weekend.
Thomas, Dylan Frittelli and Lanto Griffin are scheduled out in the final threeball at 8.10pm. A cooler day is forecast.