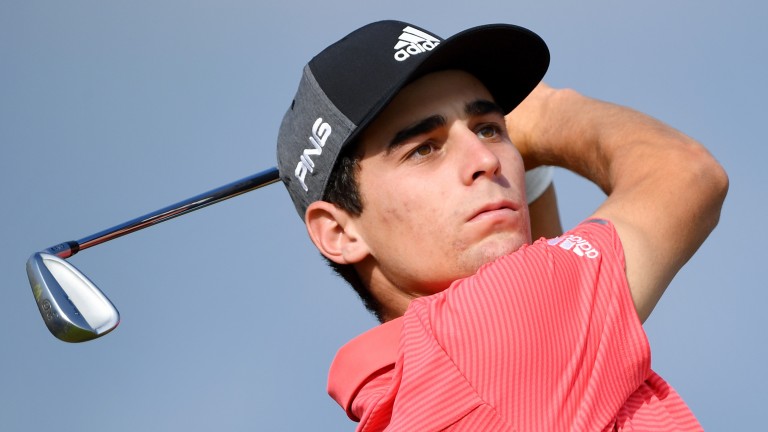 Golf tips, best bets and player analysis for the Travelers Championship at TPC River Highlands on the PGA Tour.

Live on Sky Sports Golf from 11.45am Thursday

The seven highest-ranked players in the world – and ten of the top 11 – entered the Travelers Championship at TPC River Highlands. Lust for post-lockdown competition clearly continues to course through the veins of the game's elite, although Brooks Koepka was forced to withdraw on tournament-eve after his caddie Ricky Elliott tested positive for Covid-19.

Nick Watney's positive test for Covid-19 at the RBC Heritage last week had the potential to unsettle the PGA Tour's revised schedule, but generally the players seem determined to continue. Colonial champion Daniel Berger has opted to take this week off, but most of his peers have made the trip from the Harbour Town Links to Connecticut to do battle again.

Rory McIlroy and Justin Thomas head the betting and both will relish the chance to open their shoulders at a venue which encourages attacking golf. McIlroy closed with a 64 in the 2017 Travelers and opened with the same score in 2018, but failed to contend on either occasion. And finishes of 32nd and 41st in the last fortnight do not justify interest in the world number one.

Thomas, tenth at Colonial and eighth in the Heritage after a closing 63, is a more appealing option. He was third in the 2016 Travelers before he had even won a Stateside PGA Tour event. Preference, though, is for taking much bigger prices for a shootout at an easy course where the majority of the field have the potential to be competitive.

Jon Rahm has suffered form wobbles whenever he has got close to becoming world number one for the first time and it has happened again over the last fortnight. His Colonial missed cut was followed by 33rd place at Harbour Town. The Spaniard should get there eventually, while another European has a more long-term aspiration for top-dog status.

Viktor Hovland is 53rd in the rankings, having started 2019 in 1,157th place, and the 22-year-old Norwegian possesses the tools to rapidly become a superstar. He claimed his maiden PGA Tour title in the Puerto Rico Open at the end of February and it appears only a matter of time before the 2018 US Amateur champion starts contending on a regular basis.

Hovland's ball-striking is already at elite level, and in March he started working with ace coach Pete Cowen to improve his short-game skills, looking to eradicate his chipping weakness. Hovland practised intensely during lockdown, finishing runner-up in one of the better events which went ahead during that period – the Maridoe Invitational in Texas in April.

Hovland issued a picture on social media at the start of this month showing calluses on his hands – a result of his lockdown work ethic – and he has resumed his PGA Tour campaign with two solid efforts. A tie for 23rd at Colonial featured a closing 66, then 21st spot followed at Harbour Town, again with a Sunday 66. Given neither course plays to his strengths – and he was a debutant at both – those results caught the eye.

The cocksure yet super-friendly youngster left the Heritage saying he was without his A-game – he had been competitive despite getting out of second gear – and any upturn in form this week could see him sparkle at a track which sets up much better for the attacking powerhouse.

The tiny greens of Colonial and Harbour Town, which put pressure on his chipping, can be forgotten. TPC River Highlands also has more generous fairways and looks set to be softened with a pre-tournament storm, so swashbuckling types such as Hovland can threaten scores in the low-60s.

He has course experience from finishing 54th last year on his debut as a professional – when a final-round 73 dropped him down the board. Given he had finished 12th in the US Open the previous week, playing in a marquee threeball alongside Brooks Koepka and Francesco Molinari over the first two days, it was understandable that he ran out of steam in Cromwell. Expect a sustained assault on the leaderboard this time.

Two hugely talented young guns could joust for the Travelers title – 21-year-old Chilean Joaquin Niemann can build on a bold Heritage performance. He fired weekend rounds of 63 and 65 for fifth place at Harbour Town, a dazzling Heritage debut in the wake of a closing 65 at Colonial.

Niemann can put course experience to use this week, having finished fifth on his River Highlands debut last year, and a second PGA Tour triumph on Sunday is entirely feasible for the former world number one amateur. He won The Greenbrier by six shots in September, romping to victory with a 64, and further success seems inevitable.

Sub-7,000-yard layouts are always welcome for diminutive left-hander Brian Harman, who will never overpower a course but has forged a successful career through guts and guile. He finished third in the 2015 Travelers, just a shot shy of the playoff, and sixth and eighth over the last two years.

Four rounds of par or better for 23rd place at Colonial was a solid return to action, then 28th spot at Harbour Town, where he closed with a bogey-free 65, was a tidy follow-up. A third PGA Tour success could be coming for the 33-year-old Georgia man.

The two most attractive maidens are Patrick Rodgers and Sepp Straka. Rodgers, who turns 28 next week, is a three-time PGA Tour runner-up who is surely too good to go much longer without a breakthrough. He has won on the Korn Ferry Tour and his attacking game is well suited to River Highlands, where he made his Tour debut in 2012 and tied for third in 2016.

Rodgers, a regular practice partner of Colonial champion Berger in his Florida hometown, finished 14th in the Charles Schwab and has been putting superbly this season. A missed cut on the mark as a Heritage debutant last week is easily forgiven.

Straka is an Austrian, but his family moved to Georgia when he was 14, and the Travelers is just a jaunt up the East Coast for the promising 27-year-old. Like Rodgers, he is off the mark on the Korn Ferry Tour, and seeking a first main-tour trophy.

Straka missed the cut by a shot on his Travelers debut last year, but he was ranked outside the world's top 300 and may have suffered some mental letdown having spent time on the US Open leaderboard the previous week. He has since finished third in the Barbasol Championship, fourth in the Houston Open and fourth in The American Express in January – at a Pete Dye design – and a pair of weekend 67s in the Heritage suggested his A-game has returned for River Highlands.

Sungjae Im
The Korean suffered a rare missed cut last week, but the Honda Classic champion could easily resume normal service in Cromwell and must be feared.

Bryson DeChambeau
The beefed-up Californian is better suited to River Highlands than Harbour Town, and seems likely to contend for another title if he can find an upturn in putting form.

Bubba Watson
The three-time Travelers champion must be respected on this turf and seventh place at Colonial the week before last was encouraging.

When to watch Live on Sky Sports Golf from 11.45am Thursday

Time difference Connecticut is five hours behind the UK and Ireland

Course overview The Pete Dye creation has hosted this event (formerly the Greater Hartford Open and the Buick Championship) since 1984, but was redesigned in 1989, its name changing from the TPC Connecticut to the TPC River Highlands. It was tickled again prior to the 2016 edition, with 50 bunkers removed. The remaining 69 bunkers were brought more into play. Then before the 2017 event, the greens were reconstructed to become poa annua, which sped them up significantly. Both the par-five holes – the sixth and 13th – always play well under par and represent the best birdie chances on the course. The 296-yard reachable par-four 15th is also there for the taking. The 481-yard fourth, the tenth, 16th and 17th are the sternest tests

Weather forecast A pre-tournament storm could soften the track, before sunny, calm conditions for the event, so scoring should be low

Type of player suited to the challenge All types of players have succeeded at this venue – short-hitters like Olin Browne, Woody Austin, Russell Knox and Chez Reavie have won on the same terrain as bombers like Phil Mickelson and Bubba Watson. Hitting plenty of greens and putting well is the route to success. Birdies aplenty are up for grabs, so weak putters will probably be left behind, especially this week given the lack of wind