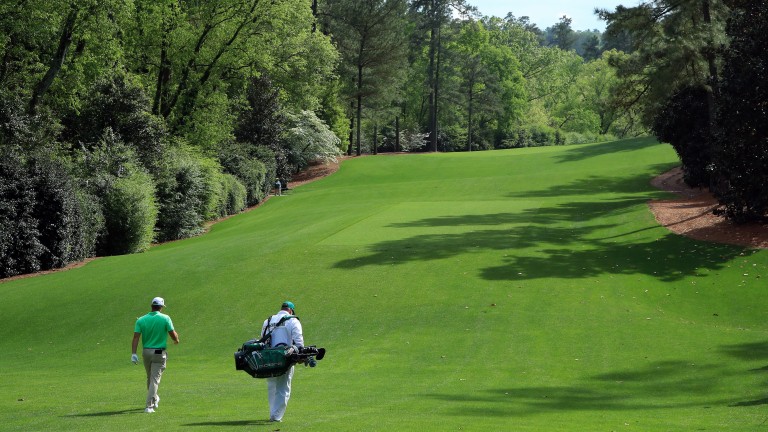 Bryson DeChambeau could be marching towards PGA Tour success
Andrew Redington
1 of 1
By Steve Palmer 10:25AM, JUN 28 2020

Brendon Todd fired a third-round 61 at TPC River Highlands to propel himself atop the Travelers Championship leaderboard and the resurgent 34-year-old is two shots clear.

Todd, who came close to retirement at the end of a torrid 2018, has revived his career in remarkable fashion. He won the Bermuda Championship by four shots in November last year, then quickly followed up with the Mayakoba Classic title.

The Travelers would be Todd's fourth PGA Tour triumph should he convert his advantage into victory – and he is a best-price 15-8 to take the opportunity. The tournament is back on schedule after thunderstorms moved tee-times forward for round three and Todd is set to join Dustin Johnson in the final twoball at 7.05pm UK and Ireland time.

Johnson also carded a Saturday 61 to surge up the board and the former world number one is biggest at 9-4 to claim his 21st PGA Tour success.

Brendon Todd was a few more missed cuts away from quitting golf and entering the restaurant business as he struggled with “ball-striking yips” in 2018, but he revived his fortunes after recruiting coach Bradley Hughes and has made a spectacular return to form.

Both his PGA Tour triumphs last November came from the front, so the leaderboard summit holds no fears for him, but the Bermuda Championship and Mayakoba Classic were much weaker fields than that which he has faced in Connecticut.

This time, Todd has one of the best players in the world alongside him in the final twoball, and there are some other superstars lurking just off the pace who could set an early clubhouse lead, so winning the Travelers Championship would be the greatest victory of his career.

Dustin Johnson is a formidable opponent – a prolific champion who has won ten PGA Tour titles since his 2016 US Open triumph – and the overnight storms have aided his cause. The considerable power advantage Johnson has over Todd has become more significant given how soft a track they will be tackling.

The 9-4 Johnson is tempting, but it must be noted that the last two times he played in a final pairing, he struggled badly. A Sunday 77 at the 2019 Heritage was a horror story. His last victory was 16 months ago, so perhaps chunking on at a short price is ill advised.

And the final-round 58 of Jim Furyk at River Highlands in 2016 will give all the chasing pack hope. Plenty of Travelers winners have emerged from deep on the leaderboard. Given the quality in the group at ten under par, a champion charging from eight shots behind is feasible.

Rory McIlroy and Jon Rahm are 100-1 and 125-1 respectively – both sharing 18th spot – and ambitious punters may fancy a gamble. Viktor Hovland still has a squeak from a shot closer, but the two most attractive outright options are the 9-4 Johnson and the 9-1 Bryson DeChambeau.

Given the concerns over Johnson's lack of recent success, DeChambeau at the much bigger odds is the recommended course of action. The softening of the turf will have left DeChambeau's mouth watering – he has ideal terrain on which to showcase his increasingly awesome power.

DeChambeau, who has finished ninth and eighth in the last two Travelers, can boast PGA Tour form figures of 5-2-4-3-8. From five shots behind Todd – and three adrift of Johnson – this could be the moment the cocksure Californian adds the cherry of a W atop his cake of consistency.

DeChambeau's ball-striking has become magnificent – earning rave reviews from his peers – and he is a serious force with which to be reckoned if he can hole his fair share on the greens. A closing birdie in round three – he holed from 17 feet on the final green – is a positive sign for Sunday.

Johnson, in contrast, missed from nine feet on the 18th, to leave a slightly sour taste in his mouth. If DeChambeau makes a fast start to the final round, he could be the man to topple his fellow American powerhouse. Betfair and Power are offering the best each-way terms.

Punters playing on the final-round twoballs should consider a favourites treble – McIlroy to defeat Ryan Armour (5.25pm) with DeChambeau (6.45pm) and Johnson (7.05pm). Kevin Na is alongside DeChambeau in the third-from-last group.