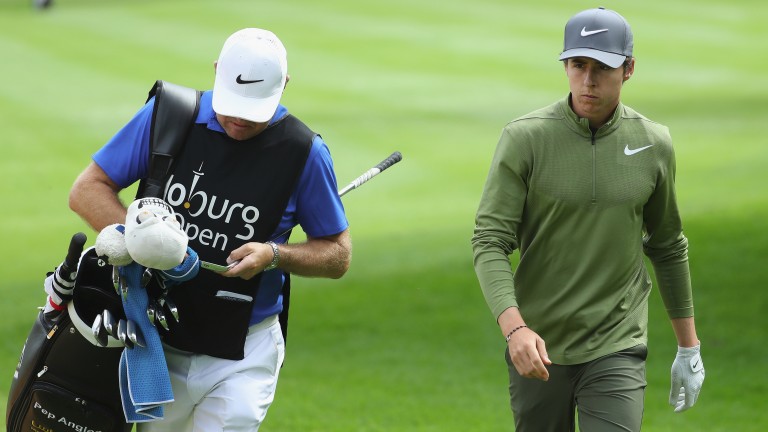 Pep Angles is a massive driver who will relish the five par-fives this week
Warren Little
1 of 1
By Steve Palmer UPDATED 3:59PM, APR 27 2021

Golf tips, best bets and player analysis for the Tenerife Open at Costa Adeje on the European Tour.

Garrick Higgo has won two of his 24 European Tour events and the South African left-hander will be a warm order for the Tenerife Open after his 25-under-par effort in the Gran Canaria Lopesan Open last week.

Higgo, who won the Open de Portugal last year and appears to relish these coastal tracks overlooking the Atlantic Ocean, will fancy his chances of a follow-up success in Tenerife. He has more than halved in price from Gran Canaria, though, and can be left alone at 18-1.

Back-to-back wins are entirely feasible for Higgo, who is clearly a 21-year-old going places, but he carried a sizzling putter in Gran Canaria and may struggle to sustain that incredible dancefloor form in Tenerife. While Higgo has shortened dramatically this week in a field of almost identical strength, Antoine Rozner has held his price from Gran Canaria, and the Frenchman is nominated as the value option.

Rozner seemed to need the run last week, having not competed since the WGC-Dell Technologies Match Play a month prior. He took time to get into a groove, leaving himself too much weekend work, but closed with a bogey-free 64 to finish 15th.

Rozner, who won the Golf in Dubai Championship before Christmas and the Qatar Masters last month, beat Bryson DeChambeau and Si Woo Kim in the WGC-Match Play and is stalking the top 50 of the world rankings. That incentive - and the possibility of getting on to Europe's Ryder Cup team - should mean the fast-improving 28-year-old will be fully focused in Tenerife.

Rozner topped the final-round greens-in-regulation statistics in Gran Canaria, bolstering an already fine record in the region. He was second in the 2018 Open de Portugal, won a Challenge Tour event in Spain in 2019, and was third in the Andalucia Masters last year.

As one of the most promising teenagers on the planet in 2018, Nicolai Hojgaard was winning virtually every tournament he entered, including a professional event in the Nordic Golf League. The amateur star was expected to be the Hojgaard brother who made most of an early impact in the pro ranks - and that is what happened when he finished runner-up behind Sergio Garcia in the 2019 KLM Open.

Slowly but surely, Rasmus Hojgaard took over as the European Tour force, quickly winning twice while Nicolai entered a slump. There have been encouraging signs since Nicolai turned 20, though, that he is ready to challenge for trophies again.

Hojgaard closed with a 67 for seventh place in the Austrian Open, then the power-packed Dane followed up with 15th spot in Gran Canaria. He should destroy the five par-five holes at Costa Adeja with his effortless length and could make a mockery of the huge odds against his name if he brings a hot putter to the wide-open venue.

Hojgaard finished fourth in a Nordic League event at PGA Catalunya in 2019 - the Mediter Real Estate Masters - and a European Tour breakthrough may be coming in Spain on Sunday.

Big-hitting Spaniard Pep Angles has a great record of success in his home country - he won a Challenge Tour event in Spain in November - and bright recent form means he can be followed with confidence for Tenerife.

Angles tied for eighth place in the Kenya Open, then finished strongly for 33rd spot in the Austrian Open. A double-bogey opening hole and a first-round 71 left him playing catch-up in Gran Canaria, but rounds of 64, 65 and 67 followed for 29th place.

Angles, runner-up behind Higgo in the Open de Portugal last year, can underline the value of form from that tournament by again excelling at a layout overlooking the Atlantic. He has also impressed along the Sicily coastline in the Rocco Forte Open.

Kurt Kitayama
A slow start meant the American slugger missed the Gran Canaria cut on the mark, but there is every reason to expect a more prominent display in Tenerife from a player who has won two European Tour events on coastal tracks.

Justin Harding
The Kenya Open champion is comfortable in a breeze and has made a habit of winning low-grade events like this one over the last few years.

Thorbjorn Olesen
The Dane finished fifth in Gran Canaria - his first tournament of the year and his first since becoming a father. The Dane has had a troubled two years, but remains full of talent.

Sean Crocker
The Zimbabwe-born American has the power and long-game class to find Costa Adeje a doddle, and seems a likely contender with a half-decent week of putting.

When to bet By 8am on Thursday

Course overview The Tenerife Open is being staged for the first time since 1994, when David Gilford won at Golf del Sur. Golf Costa Adeje hosted the 2003 Spanish Open won by Kenneth Ferrie. There was a Challenge Tour event in Tenerife - at Abama Golf Club - in 2005, which was won by John Bickerton, so Englishmen have a good record of success in Tenerife. Golf Costa Adeje is an unusual layout, with five par-five holes, six par threes and only seven par fours. The holes are short by modern standards - with only the 560-yard par-four eighth and the 240-yard par-three tenth offering a significant challenge to professionals - so scoring should be extremely low unless there are strong winds. The Jose Gancedo design, built on banana plantations, has paspalum grass fairways and TifEagle Bermuda grass greens. The fairways on this straightforward resort course are wide and welcoming, and three players finished at 22 under par (with a par of 72 and the eighth playing as a par five) before Ferrie won a playoff in 2003

Weather forecast Calm and sunny for the most part, with temperatures around 18C, and a small thunderstorm threat on Thursday afternoon. Moderate breezes over the weekend

Type of player suited to the challenge Even if the course had played as a par 71 in 2003, 18 players would have finished 15 under par or better, and the modern professionals should run riot 18 years later. Powerhouses carrying a hot putter should overwhelm the track unless the wind gets up