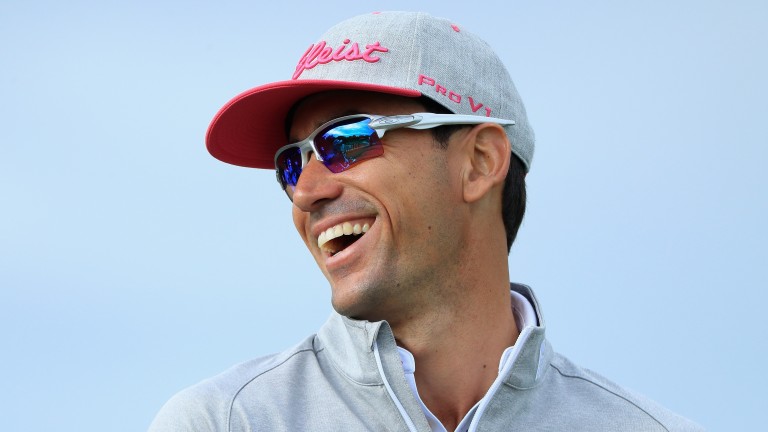 Rafa Cabrera Bello was all smiles after round three but there is much golf to be played
Getty Images
1 of 1
By Steve Palmer UPDATED 6:48PM, OCT 9 2021

Jon Rahm started the Spanish Open no bigger than 9-4 for victory - the shortest-priced favourite of the golfing year - but punters who chunked on the market leader are getting extremely twitchy.

Rahm went odds-on for the tournament after going six under par through eight holes of the first round, but the world number one has managed only to progress his score to 11 under par through three rounds, languishing six shots off the pace and drifting to a general 12-1.

Rahm is tied for ninth place, a one-over-par third-round 72 giving him a tough mission for Sunday if he is to win a third consecutive national Open. He was three over par through his first five holes of round three.

Rafa Cabrera Bello, an ante-post 55-1 chance, is two shots clear with 18 holes to play. Cabrera Bello finished runner-up to Rahm in the 2019 edition at this week's venue - Club de Campo in Madrid - and the man from the Canary Islands says he loves the venue.

Adri Arnaus, who started the week at 60-1, is a general 3-1 going into the final round tied for second place. He is alongside fellow European Tour maiden, Julien Guerrier, on the leaderboard.

A birdie at the 18th hole in round three kept Jon Rahm's dreams of a Spanish Open hat-trick alive, but he has left himself little margin for error.

The galleries doubled in size from Friday to Saturday, and Rahm failed to rise to the occasion, struggling with his swing throughout. He played the 18th hole perfectly, though, and may finish with a flourish.

The chances of a Spanish champion are still extremely strong. Rahm will probably be the man who bursts from the chasing pack, but he will almost certainly need serious fireworks to overcome both Rafa Cabrera Bello and Adri Arnaus.

Cabrera Bello is clearly comfortable at this venue - and he has dropped only two shots all week. Sleeping on the lead will not be easy, though, for the mild-mannered 37-year-old, who has never won his national Open. He is winless anywhere since the 2017 Scottish Open.

The amount of kissing and backslapping going on after Cabrera Bello's round was frankly ridiculous - it was as if his family and friends thought he had already won the tournament. Cabrera Bello himself seemed surprised and thrilled by his Saturday 64. Making birdies from off the pace is easier than doing so with the lead, and the more intense atmosphere and increased tension seems likely to unsettle him.

Julien Guerrier has been unconvincing when in contention for a maiden title. If Cabrera Bello treads water in front and Rahm fails to conjure something special, then this seems a golden opportunity for Adri Arnaus to become a European Tour champion.

Arnaus, Racing Post Sport's pre-tournament headline recommendation at 45-1, has this year developed a putting stroke that works well, and he has relished attacking Club de Campo knowing he can convert chances on the greens.

Arnaus, who finished fourth in the last Spanish Open at this venue, can be fancied to overcome a two-shot deficit if he brings the same bouncy attitude to the course he has had over the first three days. In three rounds at Club de Campo playing alongside Rahm - two in 2019 and one this week - he has outscored Rahm every time. He was five shots superior in their Saturday meeting this week and this course clearly brings out the best in the Barcelona-born bomber.

Cabrera Bello (6-5) and Rahm (12-1) are probably the best cover-shots for punters with a heavy investment in Arnaus, but punters yet to get involved should consider the 3-1 about Arnaus. He won the 2018 Challenge Tour Grand Final and has always looked good enough to triumph on the main circuit. A poor putting stroke was holding him back, but he seems to have mastered the left-hand-below-right technique and his moment may have come at the age of 26. The forecast for a sunny, calm denouement will further encourage the naturally aggressive Arnaus.

Arnaus, Cabrera Bello and Guerrier tee off in the final threeball at 11.55am UK and Ireland time. Arnaus could boss the group.