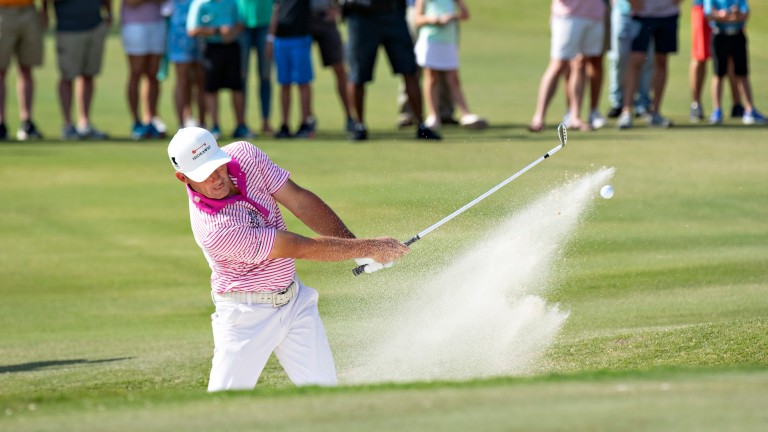 Alex Cejka plays out a bunker of his way to winning the Regions Tradition
Wesley Hitt
1 of 1
By Steve Palmer 2:15PM, MAY 26 2021

Phil Mickelson became the oldest swinger in town on Sunday night - heroically winning the US PGA Championship at the age of 50 - and this week some other golfing veterans will be seeking to enjoy a glorious moment in the limelight.

Mickelson will be at Southern Hills Country Club next year to defend his US PGA title, but this week the famous Oklahoma course hosts the Senior PGA Championship, which starts at 1.10pm UK and Ireland time.

Phil The Thrill is old enough to compete on the seniors circuit, but still good enough to win on the PGA Tour, so he will be doing a lap of honour at Colonial Country Club in the Charles Schwab Challenge.

In Mickelson's absence, Steve Stricker is 7-2 favourite for the Senior PGA. Jim Furyk and Bernhard Langer come next in the betting, but the value may lie deeper in the market. A 50-year-old paraded the Wanamaker Trophy at Kiawah Island last Sunday and another one can lift the Alfred S. Bourne Trophy at Southern Hills this Sunday.

Alex Cejka can upset the bigger names by winning the Senior PGA in Tulsa. The German turned 50 in December and has quickly established himself as a Champions Tour force.

Cejka has always been a superb ball-striker, winning four times on the European Tour before switching his attention to the States, and he famously took a five-shot lead into the final round of the 2009 Players Championship at Sawgrass.

Cejka's lone PGA Tour victory came in the 2015 Puerto Rico Open, then he lost a playoff for the 2017 Shriners Open to Patrick Cantlay. Less than four years after pushing Cantlay all the way in that Vegas shootout, Cejka is teeing up at Southern Hills in the Senior PGA. The relative spring chicken of the Champions Tour seems a threat to all this week.

Cejka is still inside the world's top 1,000 and he finished 43rd in a PGA Tour event - the Corales Championship - at the end of March. On the Champions Tour, he was second in the Chubb Classic last month, then won the Regions Tradition earlier this month, his first and only start in a senior Major. Cejka may maintain his 100 per cent record this week.

A big-price alternative is John Senden, another 50-year-old. The two-time PGA Tour champion, who finished 29th in his first Champions Tour Major, also the Regions Tradition, is an accurate driver who plays tough courses well.