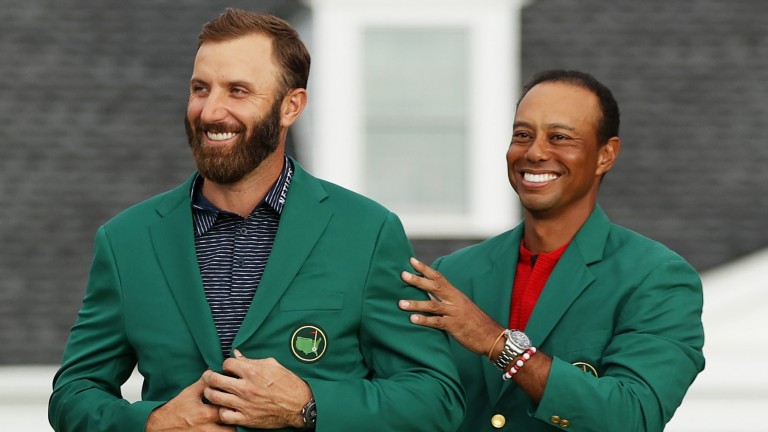 Golf tips, best bets and player analysis for the Saudi International at Royal Greens on the European Tour.

Live on Sky Sports Golf from 8am Thursday

Add these selections to your betslip with Paddy Power

Tiger Woods and Rory McIlroy have always resisted the enormous appearance fees dangled at the elite players for the Saudi International, but an army of superstars have succumbed to temptation this time and the field at Royal Greens is a deep one.

Paul Casey made a big song and dance about not taking part previously, but the Dubai Desert Classic champion has clearly had a change of heart, teeing up alongside American raiders Dustin Johnson, Bryson DeChambeau, Tony Finau and Patrick Reed.

Saudi International form figures of 1-2 highlight just how comfortable Dustin Johnson feels at Royal Greens and there is every reason to believe the world number one can bolster those results to 1-2-1 on Sunday.

Johnson is the course-record holder, having fired a Friday 61 on his way to a 19-under-par 72-hole total in 2019, and the layout sets up perfectly for the American powerhouse.

Wedge-play has become one of DJ's strengths and most holes at Royal Greens can be reduced to a drive and a wedge for the FedEx Cup champion.

Johnson has claimed a Green Jacket since his last visit to Saudi Arabia and he had a long break to let his hair down in the wake of his Augusta heroics.

There was understandably a heavy layer of rust on his game when he returned to action in the Sentry Tournament of Champions - and he hardly holed anything of length on the greens - but the giant Carolinian still carded 24 birdies on his way to 11th place.

Expect Johnson to be more switched-on for his second appearance of the year and contend throughout. Unless he endures bad luck with the weather and the draw over the first two rounds, it is difficult to imagine the favourite failing to make a major impact.

There are still at least four each-way places to gun for, even if Johnson arrives with his A-game and dominates, and Lucas Herbert is an attractive proposition at a general 66-1.

The Australian won the Dubai Desert Classic last year, is blessed with the power to take Royal Greens apart, and finished 27th on his debut there 12 months ago.

Last year Herbert teed up in Saudi straight after his Dubai triumph, so was entitled to some mental fatigue in the wake of his emotional European Tour breakthrough, and this year's more low-key build-up should be helpful.

The 25-year-old had more than three months off prior to Abu Dhabi and tied for 25th, then followed up with 22nd place in Dubai. With the rust out of his system, a bold Saudi effort can be anticipated.

Rasmus Hojgaard, a two-time European Tour champion at the age of 19, suffered a bad draw in Abu Dhabi but birdied his final hole of round two to make the cut by a shot, then finished tied for 25th. Last week in Dubai was similar for him - a strong weekend meant ninth place - and it seems like the Dane is approaching top gear again.

He missed the cut at Royal Greens last year, but had hardly any desert experience, and much better can be expected this time.

Complete a team of power-packed drivers with Ryan Fox and Dean Burmester, who are both chasing a second European Tour title.

Fox, who has finished sixth and 27th in the two previous Saudi Internationals, became a father over Christmas and was rusty in Abu Dhabi. A missed cut by a shot was followed by 41st place in Dubai and further improvement seems on the cards this week.

Burmester, an underachiever who has promised to be more positive this year, has married a superb putting stroke to his great length.

He was fifth in the Italian Open in October and fourth in the South African Open in December. His opening round of 2021 was a rusty 78 in Abu Dhabi, but five solid rounds since indicate he is ready for Royal Greens, where he finished 11th last year.

Tyrrell Hatton
The Abu Dhabi champion, who said he was tired during his first-round 76 in Dubai and followed up with a 64, is making his Saudi International debut.

Viktor Hovland
The Norwegian finished tied second in the Farmers Insurance Open on Sunday to continue his rapid rise up the world rankings. He is a debutant who has become dangerous anywhere.

When to bet By 4am Thursday

When to watch Live on Sky Sports Golf from 8am Thursday

Course overview The European Tour moved to new domain in 2019, controversially staging an event in Saudi Arabia for the first time, and the host course opened only nine months prior to the tournament. David Sampson designed the track, which is short by modern standards and fairly straightforward for European Tour professionals unless the wind blows strongly from the neighbouring Red Sea. There is only one par-five on each nine – the fourth and the 18th – and the course is dominated by its 12 par-fours. Undulating fairways are lined by light rough, desert or lakes, leading to fairly flat, Pure Dynasty (seeded paspalum) greens which typically run at 11.5 on the stimpmeter

Story of last year Dustin Johnson made a stout defence of his title, but a Sunday 70 was enough for Graeme McDowell to repel Johnson and others for a two-shot success

Weather forecast Sunny and warm Thursday, Saturday and Sunday, but some light showers are forecast for Friday. Breezy throughout

Type of player suited to the challenge The course is relatively easy – Dustin Johnson won with a 19-under-par total in 2019 – and anyone carrying a cold putter will be left behind. The layout encourages aggressive golf, setting up well for big-hitters