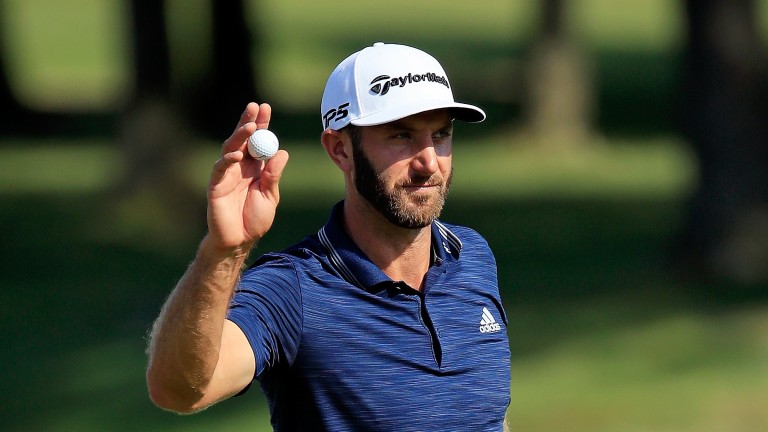 Johnson, who started the week a best-price 11-2 and went off a general 5-1 favourite, missed a short eagle putt at the 18th, but the birdie was enough to put some daylight between himself and Victor Perez, who carded a bogey-free Saturday 66.

Abu Dhabi champion, Tyrrell Hatton, is among a group of four players who are tied for third place, three shots behind Johnson, while Viktor Hovland and Sergio Garcia are a shot further adrift in a share of seventh.

Johnson is odds-on across the board for the ninth European Tour victory of his career. He won the 2019 Saudi International and is a best-price 8-13 with 18 holes to play in this edition.

Dustin Johnson was the Racing Post Sport headline selection for the Saudi International and punters who followed that advice may be wondering who the main potential party-poopers are going into the final round.

Johnson has spent three days missing mid-range putts - the world number one has failed to convert countless birdie opportunities - but the quality of his swing and tee-to-green work means he sits atop the board. His one serious long-game error of the week - a gust of wind into his face contributed to an iron shot into water at the 13th in round three - resulted in a double-bogey. Aside from that mishap - he knows he should have aimed left and safe - he has covered 53 of 54 holes never looking in danger of dropping shots.

It is reasonable, then, to expect a largely clean scorecard from Johnson in round four. If he had holed his fair share over the first three days, the tournament would effectively be over, but with only two shots in hand on Victor Perez, the leader is acutely aware that there is work to be done.

Perez, helped by the fact the players will be going out in threeballs in the final round, should be able to relax into his date with the planet's premier player and showcase his ball-striking skills to Johnson. Perez has been generally poor on the Middle East Swing, but has found his game in Saudi Arabia and can be expected to finish strongly.

Expect Johnson and Perez to perform well in the final threeball, leaving Soren Kjeldsen in their wake, while Tyrrell Hatton and Andy Sullivan will probably do plenty of damage from the penultimate group.

A sunny day with light breezes is forecast, so somebody in the chasing pack seems likely to card a low number. Perez, Hatton and Sullivan appear the main dangers to Johnson, but Viktor Hovland is also a serious threat from four shots behind and Ryan Fox, a Racing Post Sport each-way selection at 125-1, could also reestablish himself as a contender if he ups his game on the greens. The New Zealander has been hitting his ball superbly all week, but putting like a baby elephant.

The 12-1 Perez and the 10-1 Hatton are probably the best outright cover-shots for punters with a large investment in Johnson, but the Masters champion can be fancied to repel everyone.

Johnson, Perez and Kjeldsen are scheduled off at 7.50am UK and Ireland time on Sunday. Hovland, bursting with form and with a great record on the type of grass used at Royal Greens, looks the best threeball wager against Calum Hill and David Horsey (7.20am).
Patrick Reed may run out of gas at the end of an intense fortnight and brilliant Danish teenager Rasmus Hojgaard is good value to upset the American raider in the 6.20am threeball.