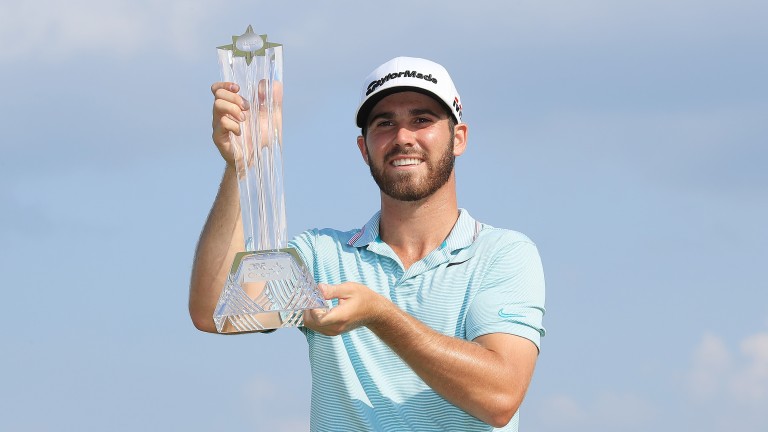 Matthew Wolff could soon have a second trophy to parade
Getty Images
1 of 1
By Steve Palmer 9:56AM, JUL 5 2020

Matthew Wolff fired his second consecutive 64 in the Rocket Mortgage Classic to assume a three-shot lead going into the final round of the Detroit Golf Club shootout.

The DGC leaderboard was hugely congested going into the weekend, but a sizzling Saturday provided some separation for Wolff, who could be backed at 125-1 ante-post. Nine birdies and an eagle propelled the young powerhouse to 19 under par.

Pre-tournament 6-1 favourite, Bryson DeChambeau, is tied for second place, alongside Ryan Armour, and there is a further two-shot gap to the chasing pack, so the third round changed the complexion of what seemed set to be a close contest.

Wolff is 5-4 to successfully defend his lead to claim a second PGA Tour title. The 21-year-old won the 3M Open almost exactly a year ago. DeChambeau, who has form figures of 5-2-4-3-8-6 from his last six tournaments, is hunting a sixth Tour triumph.

One of the golfing highlights of 2019 was the thrilling finish to the 3M Open – at which Bryson DeChambeau thought he set a clubhouse lead which would almost certainly deliver a playoff spot, before Matthew Wolff conjured a last-gasp eagle to triumph by a shot. The duo dominate the Rocket Mortgage Classic betting going into round four.

DeChambeau will be desperate to avenge what was a seriously humbling 3M Open defeat – the cameras were trained on his face as it went from raging euphoria to astonished despair in the space of a few minutes. But the in-form Californian will have to attempt his Wolff-slaying from the penultimate twoball.

DeChambeau will have been gutted that he failed to gain a spot in the final pairing – which would have afforded the chance of a tense collision between two of the longest drivers in the sport – but Wolff will have the far less intimidating opponent of Ryan Armour alongside instead.

Add to the equation that DeChambeau is under fire for his outrageous conduct towards a cameraman beside the seventh green in round three, and the 5-4 Wolff appears more appealing than the 21-10 DeChambeau. Frustrations may be boiling over for DeChambeau, who has been unable to turn brilliant ball-striking into post-lockdown trophies because of short-game frailties, and the more relaxed Wolff can repel his pursuer with a three-shot start.

Armour is a similar type to Nate Lashley, who won this event last year, and the Ohio man should plod his way to a healthy cheque. Armour probably lacks the sparkle to trouble Wolff, though, on a track with four par-fives.

Odds-against Wolff seems fair – although inconsistent, this is one of the best players in the game when he is on-song – but the Florida-based pro is far from home and hosed on a course which yields such low scoring.

Another hot, sunny day, with light breezes, is forecast, and somebody from the chasing pack seems sure to make a charge to give Wolff something to think about. A likely candidate for that role is his old Oklahoma State teammate Viktor Hovland, who is six shots behind.

Hovland, who was bogey-free in round three, is gaining almost seven shots on the field from tee to green and showcasing his magnificent ball-striking. A cold putter has meant a frustrating fortnight for his followers, but any upturn in form on the greens should see him make a run at his good friend on Sunday.

The Wolff and Hovland dual forecast is available at 28-1 with Sky Bet. If the temperamental DeChambeau loses his head after a few early missed putts, and Armour gets comfortable aboard the par train, Hovland could easily sneak past the rest to claim the runner-up spot behind his pal.

Final-round twoball punters are pointed towards Kevin Kisner in the 5.45pm (UK and Ireland time) contest. Tyrrell Hatton has been given strong favouritism by bookmakers, but there is precious little between these two in terms of ability and style of play, and Kisner is well capable of upsetting the odds. The final twoball of Wolff and Armour tees off at 7.05pm.