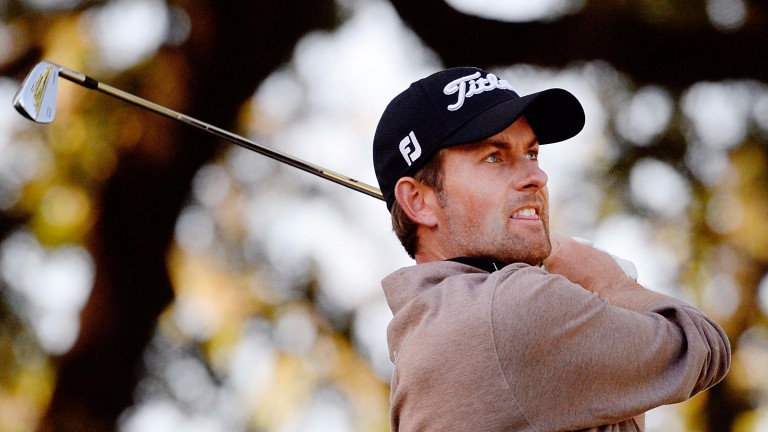 Webb Simpson leads the RBC Heritage at the halfway stage, but the most significant news to emerge from the Harbour Town Links is that Nick Watney has tested positive for Covid-19.

Watney felt unwell on Friday morning, then got tested at the venue, reportedly being allowed to walk freely on the grounds while he awaited the results. Rory McIlroy said he spoke to Watney on the practice putting green prior to his second round.

After missing the cut in the Charles Schwab Challenge last week, Watney travelled independently to the Heritage, so did not board the charter flight which was laid on for players at Colonial to get to Harbour Town. PGA Tour chiefs are hoping this means their 'bubble' has not been infected, but a 'track-and-trace' of all those who came into contact with Watney has started.

Vaughn Taylor and Luke List, the first-round playing partners of Watney, were informed midway through their second round of why Watney had withdrawn. Reports suggest Watney was chatting to Si Woo Kim on the driving range, so there is a fear of further positive tests.

Over the first two tournaments of the post-lockdown PGA Tour resumption, the strict code of conduct laid out by the Tour has been largely ignored, especially with regards to social distancing. Fist-bumps have been a regular feature, while player-caddie relationships have essentially been as they were pre-virus. The Watney news may shock competitors into greater caution.

Simpson, 30-1 before the tournament, is a general 7-2 with 36 holes to play. The Pheonix Open champion is jostling for favouritism with second-placed Bryson DeChambeau, who is also a general 7-2. Sky Bet are offering a standout 4-1 Simpson.

The tournament is going ahead as planned, despite the Watney news, and Simpson and DeChambeau will comprise the final third-round twoball at 7.10pm UK and Ireland time.

In February Webb Simpson won the tournament which features the biggest galleries – the Phoenix Open – and on Sunday the North Carolinian could win a tournament without any galleries at all.

Simpson struck his ball with great authority in a round-one 65, then putted superbly to card the same score in round two, laying an excellent foundation for the weekend.

Simpson loves the Harbour Town Links, where his lack of driving distance is not a significant handicap, and this week he has showcased the improved short-game skills which have propelled him into the world's top ten. On and around the greens, the former US Open champion has become deadly.

Simpson, a Racing Post Sport ante-post recommendation at 30-1, has clearly got the 'close-season' rust out of his system. He missed the cut at Colonial last week, having not got much practice under his belt in lockdown, but an eagle and 14 birdies have been captured over the first two rounds of the Heritage.

Like for the Charles Schwab though – there is a wide-open feel to this event going into the weekend. There are 21 players within four shots of the lead, so Simpson will be quickly swamped if he fails to keep his foot down in front.

Bryson DeChambeau, twice a top-four finisher at Harbour Town in the past, is an obvious threat. He will play alongside Simpson for the third consecutive day. Corey Conners, Matthew Fitzpatrick and Abraham Ancer are a tidy trio who should also hang about on the leaderboard, while local lad Matthew NeSmith is a lively 50-1 chance, and Brooks Koepka and Ian Poulter are well in the hunt from just three shots off the pace.

With Simpson and Poulter (80-1) onside, Racing Post Sport followers are not advised to add any outright selections at this stage. DeChambeau, Conners, Fitzpatrick, Ancer, NeSmith and Koepka are all respected, but there are too many dangers to consider. Dustin Johnson, competing in the state of his birth, is only four shots behind and carrying an uncharacteristically determined look.

Third-round twoball punters are pointed towards Conners and NeSmith. Conners, a world-class tee-to-green operator, should prove too steady for Ryan Palmer in the penulatimate group, while NeSmith, successful as a junior on this track and bursting with course comfort, is a value outsider against Jhonattan Vegas.

A hot, humid day, with some short thunderstorms and hardly any wind, is forecast. And the outlook is similar for Sunday.