Prolific Dustin Johnson can remind the world who tops the rankings 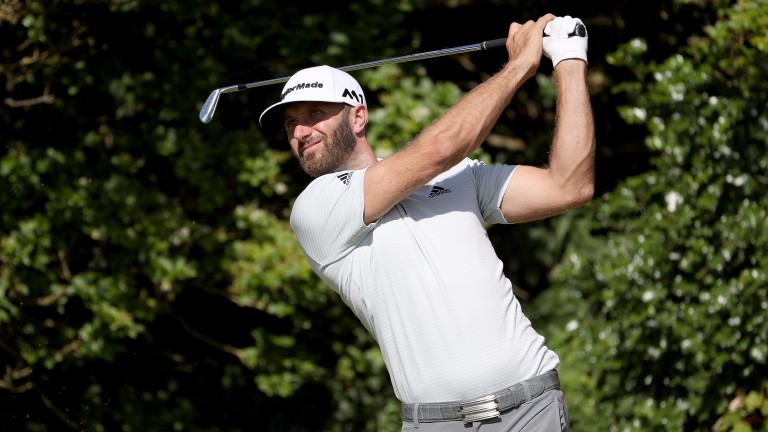 Golf tips, best bets and player analysis for the Players Championship at TPC Sawgrass on the PGA Tour.

Live on Sky Sports Main Event & Golf from 11.45am Thursday

Paddy Power are offering ten each-way places on the Players Championship. Sign up and get up to £50 in free sports bets

The world changed a year ago, jaws dropping as the PGA Tour's flagship event was cancelled after one round, and the impact of Covid-19 is still being felt 12 months later for the 2021 Players Championship. Only a fifth of the usual amount of spectators will be permitted for the so-called 'Fifth Major'.

The venue remains a mouthwatering one for golf fans, with water everywhere and potentially card-busting holes down the stretch, but the switch in the schedule from May to March has taken some of the sting from TPC Sawgrass. The course is not so firm and fiery, meaning punters have to alter their plans in response.

Unchanged, though, is the need for the champion to exhibit bundles of courage, while a whopping $2.7m first prize is up for grabs to add to the tension.

Bryson DeChambeau hysteria is reaching fever pitch again after his Bay Hill success on Sunday but the sport's genuine top dog can remind the world of the real rankings at Sawgrass this week.

Dustin Johnson - the Masters champion and the FedEx Cup champion - has quickly gone off the radar of many punters due to a little dip in putting form. It is surely only a matter of time before DJ regains his sparkle on the dancefloors, though, and offers of 12-1 about him claiming a first Players Championship title on Sunday appear generous.

Johnson has an incredible strike-rate and is a massive price based on his recent achievements. He has won four of his last ten tournaments, five of his last 15 and seven of his last 40. Starting from the 2016 US Open - when he became a Major champion - the giant Carolinian has played in 97 events and won 17 of them. That is a 17 percent win-rate over the course of almost five years.

The lush conditions of a March Sawgrass were greatly appreciated by Johnson in 2019. He was the only player in the field to card four rounds in the 60s, finishing fifth, three shots behind. His final three goes at the May Sawgrass resulted in a decent results of 28-12-17, so he has slowly but surely got to grips with the layout, and he opened with a steady 70 before the 2020 cancellation.

Johnson's disappointing performance in the WGC last time out is probably best forgiven. News of Tiger Woods's car crash broke just before the event, then Johnson, potentially unsettled, carded a Thursday 77. Two solid 69s followed, then on Sunday, tailed off and lacking interest, he still managed to fire five birdies in his 78.

The month of putting woes may prompt a putter switch, which could solve the problem, and the Florida-based superstar can be relied upon for maximum concentration at Sawgrass. He will want the Players title on his CV before hanging up his clubs.

The losing drought of Hideki Matsuyama stretches back to August, 2017, but there are reasons for believing this could be the week the Japanese ace gets back to winning ways. He is still only 29 and five PGA Tour titles, including two WGCs, is an impressive haul. He has destroyed top-class fields - his WGC triumphs have come by margins of seven and five shots - and Sawgrass is a venue he adores.

Matsuyama must have been furious with last year's Thursday-night cancellation, having just carded a nine-under-par 63 to lead by two shots after round one. That effort, equalling the Sawgrass course record was even more impressive when you consider that the weekend prior he had hacked his way to rounds of 80 and 77 at Bay Hill. With his game apparently in tatters, he turned up at Sawgrass and made merry.

Seventh place in 2016 showed that Matsuyama could handle the May conditions, but the switch to March was no problem, with a strong weekend yielding eighth spot in 2019. Matsuyama is 20 under par for his last three rounds at the track.

This is a home game for Australian ace Cameron Smith, who lives in Ponte Vedra Beach, and he knows Sawgrass extremely well. He is yet to turn home advantage into a Players Championship title tilt, but encouraging recent form suggests this could be his moment. Fourth place in the Genesis Invitational was followed by 11th spot in the WGC at The Concession.

Smith tied for second in the Masters in November, is up to world number 27, and can threaten a second PGA Tour success on Sunday.

Andrew Putnam
The 2018 Barracuda Championship winner has struck a rich vein of form and could run into the places at a juicy price.

Justin Thomas
The world number three relishes the Sawgrass challenge and should be a factor if he can rediscover his A-game, which has been on show sporadically this year.

Patrick Cantlay
The Florida-based Californian skipped the WGC with some health problems, but has been in solid nick all year and is well equipped for Sawgrass.

Sungjae Im
The 22-year-old Korean has a strong record in Florida, where he won the Honda Classic a year ago, and should be in contention if he can warm his putter.

Tyrrell Hatton
The Florida-based Englishman whined his way to a miserable 77 at Bay Hill last Thursday, fighting his way back into the event, before a weak Sunday. A tempting option.

Christiaan Bezuidenhout
The South African played well for 70 holes at Bay Hill last week before dropping three shots and finishing seventh. He carded a 65 before the Players was abandoned last year.

When to watch Live on Sky Sports Main Event & Golf from 11.45am Thursday

Course overview The famous Pete Dye design, which has hosted this tournament since 1982, can be a brutal test. The Championship has become known as the 'Fifth Major' due to the quality of the field – all the elite usually tee up – and the injured Brooks Koepka is the most significant absentee this time. Dangerous holes, one of the most talked-about in golf being the island-green 17th, can see competitors card some big numbers and the event always makes for a fascinating spectacle. The par fives – the second, ninth, 11th and 16th – offer relief during a demanding round. The track has a state-of-the-art drainage system, so officials can attempt to get the track firm and fast, but the switch in 2019 from a May date in the calendar to a March one had a dramatic effect on course conditions. It is much more lush in March, so the ball does not roll to the same extent, and it does not fly as far in the colder air. Longer clubs are required on approach than before, but the small, contoured greens are more receptive. In 2017, the 12th hole was redesigned to become a driveable par four of 302 yards.

The story of last year The 2020 event was cancelled after one round due to Covid-19. Hideki Matsuyama had posted a 63 to lead by two shots from Harris English, Christiaan Bezuidenhout and Si Woo Kim.

Weather forecast Sunny, with light to moderate breezes throughout, temperatures rising slowly from 21C on Thursday to 27C on Sunday

Type of player suited to the challenge Plodders traditionally succeeded at this venue when the event was staged in May, but the switch to March and the lusher terrain effectively lengthened the track and played into the hands of big-hitters.