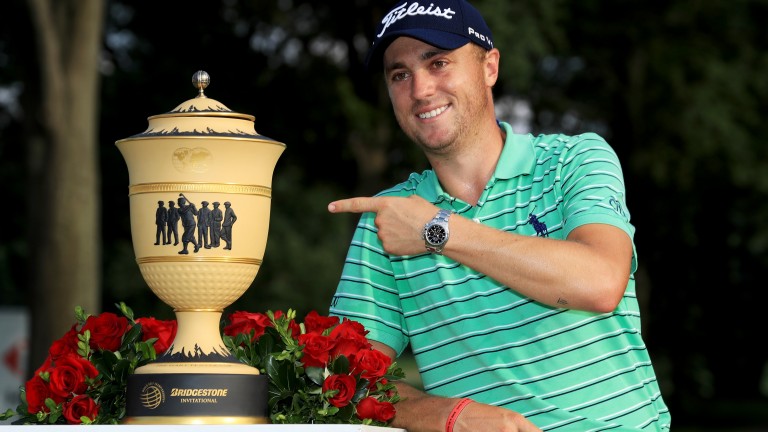 Justin Thomas has got used to collecting prestigious trophies
Sam Greenwood
1 of 1
By Steve Palmer 9:32AM, FEB 7 2021

Jordan Spieth lit up TPC Scottsdale on Saturday, firing a ten-under-par 61 to propel himself to the leaderboard summit in the Phoenix Open, threatening a first victory since the 2017 Open Championship.

The 27-year-old Texan, who has not claimed any silverware since lifting the Claret Jug at Royal Birkdale, last led a PGA Tour event after three rounds 931 days ago. He carded ten birdies in his Phoenix third round - a new Tour record for him.

Punters working from the old adage that form is temporary but class is permanent may have forgiven his three-year slump and backed the former world number one at 100-1 ante-post for this week's Scottsdale shootout. He is no bigger than 5-2 with 18 holes to play.

Xander Schauffele, a pre-tournament 11-1 chance, is the 10-11 favourite. Spieth and Schauffele are tied for first place, three shots clear of the chasing pack.

Successful punters keep a calm head while their heart is trying to influence their judgement - and as thrilling as Jordan Spieth's Saturday fireworks were, it is probably sensible not to get too carried away. The 5-2 Spieth is easy to ignore.

Spieth's iron-play has been superb, but his driving remains shaky, and that lack of tee-shot solidity may see the world number 92's title tilt falter on Sunday.

The heroics of Royal Birkdale are almost four years ago and this may be a week where Spieth gets a feel for contending again, without the ultimate result of ending the victory drought.

In fact, there is scope for both of the leaders to find tension creeps into their game under final-round pressure, opening up the tournament to the army of pursuers. Xander Schauffele is on a long losing streak of his own - 25 months - and the desperation for the trophy felt by both of these formerly prolific champions may tell down the stretch.

Scottie Scheffler, who has spent six months as a serious contender for titles, could make inroads into the lead from his place in the final threeball and 12-1 is tempting. But it is asking a lot of the maiden, who can be clumsy with putter in hand and four-putted a green earlier in the week, to handle the spotlight of a gig alongside Spieth and Schauffele and overcome a three-shot deficit on both for his breakthrough.

All things considered, the set-up of the leaderboard seems to represent a fantastic opportunity for Justin Thomas to put his Hawaii hell behind him and move back into the winner's enclosure.
Thomas suffered lots of flak for using a homophobic term to curse himself during the Sentry Tournament of Champions, but his golf was generally solid and he ended up finishing third, before missing the cut on his Abu Dhabi Championship debut.

This is his first start since Abu Dhabi and Thomas has slowly but surely got sharper as the week has worn on - and he must be relieved by how warm his welcome has been from the 5,000 spectators who have been allowed in each day. Thomas remains the darling of most American golf fans.

The world number three started driving well and putting solidly in round three at Scottsdale. His wedges were not going close enough, but typically he is the best wedge player in the world, so it is reasonable to expect that department of his game to recover for Sunday.

Thomas has finished third in the last two Phoenix Opens - the track sets up wonderfully for the pint-sized powerhouse - and every hole is a birdie chance for him when he is possession of his A-game. A sunny, calm final day is forecast and JT can be fancied to quickly eat into his four-shot deficit.

Brooks Koepka and Jon Rahm may make a charge for the places, but Thomas is close enough to still have designs on the trophy and he can take full advantage of any encouragement from his pals Spieth and Schauffele.

For Schauffele, who lost a playoff to Thomas for the 2020 Sentry, an appearance from the 13-time PGA Tour champ in his rear-view mirror could be particularly disturbing.

Scheffler seems the value for the final threeball (6.20pm UK and Ireland time), while Koepka appears a solid option against Steve Stricker and James Hahn in the 5.58pm contest.